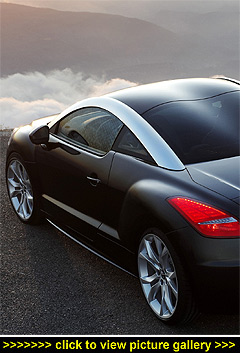 “Peugeot’s stunning new RCZ 2+2
sports coupe is on sale from 20 May.
Around 2,500 will be available in the
UK this year and a third of them are
already spoken for. And with prices
from just Ł20,450, it’s no surprise
that customers are beating a path to
Peugeot showrooms...”

WHEN THE RCZ WAS FIRST SHOWN AS A DESIGN CONCEPT in September 2007 at the Frankfurt Motor Show, it was dubbed by motoring pundits as the car that Peugeot couldn't afford NOT to build. It would give the entire brand a big step-up in terms of styling and image, especially as the company said it was moving towards building better quality and improved specification new models.

So now the RCZ — Peugeot's first model to not carry the company's traditional zero or double zero model numbering — is here. And it is very close indeed to its initial design concept although it doesn't use the new-style grille. However, it does carry the more polished and sophisticated interpretation of the Peugeot Lion.

If we consider just how much the Audi TT sports coupe did for the fledgling Audi brand many years ago, the RCZ should do the same for Peugeot. With its eye-catching Le Mans motorsport-inspired 'double-bubble' roof — designed to smooth the airflow over the car and disperse 'dirty' air away from the tail — the RCZ is a real head-turner.

For good measure there is an automatic (with manual override) rear spoiler which deploys in two stages at speeds over 53mph up to 96mph. In addition, the front and rear tracks are widened significantly giving a wide and low stance leading to huge wheelarches housing big wheels. From the driver's seat, the RCZ feels very wide indeed but that only adds to its sporty status.

At the front, Peugeot's 'feline' face incorporates a wide aluminium bonnet; at the sides, striking aluminium A to C pillar roof arches highlight the double-bubble domed coupe roof design. At the rear, the coupe has a very powerful and muscular look to it; very Audi TT-ish in treatment.

Indeed, the Audi TT is one of the RCZ's major sales competitors together with the Volkswagen Scirocco, BMW 1-Series, RenaultSport Megane 250 Cup and the Alfa Romeo Brera Coupe.

Next to the Audi TT, the RCZ is forecast to have the next best residual values over the usual 3-years / 36,000-miles period at 46 per cent; the Audi is 48 per cent.

There are three engine options to choose from. First is the PSA Peugeot Citroen + BMW / MINI 1.6-litre THP turbocharged direct injection petrol unit producing 156bhp and 177lb ft of torque from 1,400rpm and mated with a six-speed manual gearbox. Fuel economy is officially 43.1mpg — on test this week my brief drive returned 35.6mpg. CO2 emissions are 155g/km so road tax is Ł155. Around 30 per cent of customers are expected to choose this engine. A six-speed torque converter automatic gearbox will become available as an option for this engine this Summer and one in ten customers will go for that.

There is also a 2.0-litre HDi 163bhp turbodiesel engine with 236lb ft of torque and a six-speed manual gearbox available from launch — in the long-term, 35 per cent of users (mainly high-mileage business drivers) will opt for this. Fuel economy is officially 53.2mpg and on test this week 43.4mpg was the figure achieved. CO2 emissions are 139g/km so road tax is a low Ł110 a year.

In August, a third engine joins the line-up in the form of a 1.6-litre THP twin-scroll turbocharged direct injection petrol unit with 200bhp and 202lb ft of torque from 1,700rpm. This runs in conjunction with a six-speed manual gearbox. Fuel economy will be 39.8mpg and CO2 emissions will be nearly as low as the 156bhp unit at 159g/km. The brakes and suspension are beefed up for this model to accommodate the extra performance. Around 20 per cent of RCZ buyers are expected to choose this model.

Unusually, all engines are available with both trim and equipment levels — Sport and GT — and at this stage GT would seem to be the most popular with the extra equipment worth more than the Ł2,300 GT models cost over and above Sport. Another unusual issue is the fact that Sport models cannot have any factory fitted extras added to them while GT models can be tweaked by customers with a wide range of extra-cost options.

Inside the RCZ the instruments, controls and their layout are typical modern Peugeot design — a tad fussy but they are all there.

The Sport has 18-inch alloy road wheels and the car rides much better on these than the 19-inchers used for the GT and for that reason I would opt for the Sport model.

GT models have larger wheels, leather upholstery, heated and electrically-adjustable front seats, front parking aid and automatic lights and wipers. Both models have a good stereo sound system but satellite navigation is an extra-cost option. Both versions, and bearing in mind this is a 2+2 sports coupe, have a pretty large boot and that is a big advantage the RCZ offers over its rivals.

As for engine choice? For lower mileage retail customers the 156bhp petrol unit will be fine. It is quiet, relatively responsive and will meet all needs. The 200bhp petrol engine (which wasn't available for test driving) will undoubtedly add verve to the driving experience but at a price — Ł22,750 to Ł25,050.

Most impressive for its overall performance with fuel economy and more low-down grunt was the 163bhp 2.0-litre turbodiesel. I drove this unit in the Sport specification model and it felt the better balanced version; it offered a more comfortable ride thanks to the smaller wheels and it just felt more accomplished on our busy roads.

The RCZ is not as sharp in the handling department as the VW Scirocco but it's about the same as the Audi TT — which is praise enough. The RCZ is very well priced if you stick with the Sport versions: you get all the good looks at a competitive price, better mpg and lower road and company car tax.

So, no complaints? Only the low headroom through the door arches and very limited rear seat legroom; the steering wheel feels too big in diameter and, with the GT's larger wheels the ride is harsher. On the other hand, there's the RCZ's brilliant styling, good equipment, strong engines, large boot and attractive pricing. — David Miles