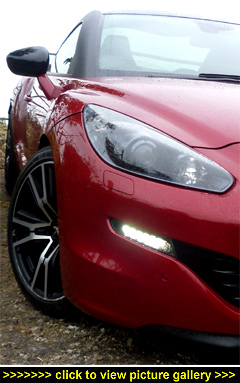 “Before the new ‘R’ version, the
most powerful RCZ you could buy
came with a not-insignificant 200bhp
under the bonnet. But now Peugeot
has upped the stakes considerably —
with a 270bhp race-bred model...”

THERE WAS NEVER ANY question that the RCZ was a stunner in the looks department — there's a real joie de vivre about its provocatively curvaceous lines and sexy 'double-bubble' roof; even the tail is slinky, running out of the muscular rear haunches to terminate in a large fixed rear spoiler.

Voluptuousness aside, even 200bhp wasn't enough to endow it with the super-coupe performance its head-turning body demanded; 270bhp certainly does, taking it to an electronically-limited 155mph. More entertainingly, the fancy French filly now sprints to 62mph in 5.9 seconds."

Power comes from the same four-cylinder 1.6-litre unit as drives the lesser 200bhp versions, but it's been comprehensively upgraded and fettled by Peugeot Sport — the French car-maker's Paris-based, in-house motorsport department — to punch out 270bhp at 6,000rpm with 243lb ft of torque on call between 1,900 and 5,500rpm. For the record, the RCZ R's near-170bhp-per-litre earns it a place up with the best in the world for a production vehicle.

The powerplant uses new forged aluminium pistons developed by Mahle Motorsport (using a Formula One engine grade of aluminium), as well as new conn rods and polymer-coated big-end shells, while a special heat treatment for the reinforced engine block compensates for the higher operating temperatures made possible by the redesigned twin-scroll turbocharger.

Thanks to the substantial power boost the torque-rich 1.6-litre always feels eager to play; even rubbing up against the redline it's still willing. It helps that he gearbox's six nicely stacked ratios have been carefully chosen to facilitate get-up-and-go in whatever gear you're coming from, and the turbo plays along nicely, even low down the rev range.

Crush the accelerator into the floor mat and pick-up is immediate. The bonus is the sports exhaust's enhanced 'sound system' that amplifies the R's mechanical soundtrack — driven hard, it's melodious enough to make you want to turn off the hi-fi.

But that's not all. To make sure you can actually use all of those extra prancing horses Peugeot Sport's engineers have also upgraded the suspension to endow the RCR R with some seriously-focused dynamic 'form' — these mods include lowering by 10mm, new damper patterns, increased spring stiffness; anti-roll centring, tracks, toe-in and camber have all also been optimised for greater agility and grip.

Also playing a major part is the R's dynamic arsenal is a set of Goodyear Eagle F1 235/40 rubber wrapped around unique 19-inch alloy wheels — the alloys two-tone diamond/matt finish design is not just about looking good; first and foremost it maximises the cooling of the beefed-up four-piston brakes.

No use being able to accelerate like the wind unless you can stop harder than you can go. As you'd expect, the R comes with uprated brakes that serve up real stopping power and stability under braking (officially the R brakes from 80mph to a stop in less than 61 metres.

Thanks to the progressive damping, the ride — despite a sports suspension set-up and lo-pro-shod 19-inchers — is impressively compliant even on the UK's rough and ready roads. And that's not all: the R steers as well as it does everything else; in other words it's responsive with decently quick turn-in.

With a substantial 270bhp being laid down through the front wheels you might be expecting some torque steer. No problem: Peugeot have got that covered and to neutralise any torque steer and wheelspin they've fitted a Torsen mechanical limited-slip differential.

Most drivers won't be aware of it as it goes about its main business of enhancing fast-in, fast-out cornering grip because most drivers will be too busy mentally praising the polished manner in which the 'tied-down' R grips, goes and flows through bends and around corners and roundabouts.

While you'll need £32K to put an 'R' on your drive, for the extra money you get much, much more than just a quicker RCZ — the R is a proper sporting driver's car that's equally at home on a track as it is on everyday blacktop.

Swing open the driver's door and you'll find an enticing interior that lives up to the exterior — biggest first impression is of the low-slung semi-race seats, upholstered in grey Nappa leather and Alcantara suede. And they're every bit as holding and comfortable as they look, with decent support in all the right places. The leather-rimmed wheel is small, sporty and flat-bottomed but you can read the dials easily — and stylish dials they are too, with engraved numerals on ally bands.

On chilly winter mornings you might want to wear driving gloves because the first touch of the palm-fitting, polished-ally gear knob is a wake-up call — but then it does such a fine job of weighting the short-throw lever as you flick it accurately around the gate that its early morning coldness is quickly forgiven.

Fit and finish is fine throughout and there's a satisfying high-quality look about the 'twin-cockpit' layout cabin — a small 'R' plaque on the centre tunnel close to the trad swan-neck handbrake confirms it's no 'cooking' RCZ you're sitting in.

Visibility out is first-rate. Unexpectedly, so too is the view behind through the seemingly 'wraparound' rear screen. There's minimal distraction from the fascia — and the SatNav screen is ideally sited top-dead-centre of the dash, at eye-level. A switch adjusts its 'tilt' to minimise glare (not that we encountered any) and if your orienteering skills are up to scratch then the press of a button will fold it away completely. Worth noting for longer cruise control engaged trips is that

Other well-considered touches include a digital speed readout on the driver's information screen at the heart of the hooded instrument cluster (along with range, mpg, graphic SatNav prompts, compass, etc), posted speed limit sign recognition and display on the pin-sharp 3D mapping, clear parking graphics on the SatNav screen, and a handsome analogue clock in the fascia.

If you're of a tidy disposition then you'll be glad of the numerous cubbies and cupholders dotted about, as well as the door pockets that stretch out the length of the long doors; in the summer months you'll sing the praises of the cooled glovebox and the powerful airflow from the four fascia vents.

This is a 2+2 coupe and as such comes with a pair of snug rear seats. Let's face it, you'd buy one of these to indulge your driving appetite and after all the effort that's gone into making it handle so fluently, the last thing you'd want to do is handicap its delicious power-to-weight ratio by strapping bodies in the back — so, occasional 'kids ride free' usage.

And ideally, nothing more than some shopping overspill or personal luggage with the rear seatback folded down for those touring holidays to Italy where, no matter how glamorous its driver, it will be the RCZ R that receives the lion's share of the wolf whistles.

While we're on the subject, the R's 309-litre boot is easily accessed after its self-lifting tailgate moves up and away to expose 309 litres of rectangular-shaped luggage space. Plus, lift the boot floor and there's more; a deep multi-section storage tray, along with a tyre repair kit.

The icing on the RCZ cake is that this high-performing version won't kill you on road tax (£140 annually) or at the pumps: CO2 emissions are just 145g/km — amazingly even better than its less powerful 156bhp (149g/km) and 200bhp (155g/km) sisters — and an official combined consumption figure of 44.8mpg. Our test 'R' averaged 39.2mpg, hitting 46mpg on our touring sections which makes it notably better in real-life than many larger-engined rivals.

Ten out of ten to Peugeot for not just making the RCZ faster but for thoroughly re-engineering it into a terrifically entertaining sports coupe that while perfectly competent and practical for day-to-day running can, in an instant, step up and sincerely wow a keen driver — MotorBar