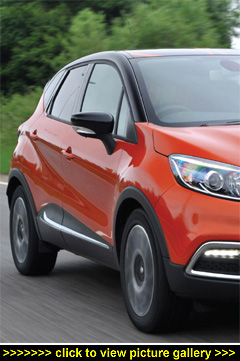 “Renault’s first crossover is the
five-door supermini B-segment-sized
Captur (no ‘e’ please, she’s French!)
which has just started to arrive in UK
dealerships at prices ranging from
Ł12,495 to Ł18,895...”

THE CAPTUR SLOTS NEATLY into the fast-developing new sector which combines supermini hatchback size with SUV/MPV/4x4 looks. The market-leading Nissan Juke uses the same platform as its Alliance-partner Renault's new Clio, and now the Captur.

The MINI Countryman (including the ALL4 4WD variants) is yet another contender, and soon Fiat joins this small crossover circus with their 500L Trekking. Plus Ford, who will have their Fiesta-based EcoSport range on the market before the end of the year.

Size matters in today's economically-stressed market and the B-segment now accounts for around one third of all new cars sold in the UK, mostly fuelled by downsizers who want more than a conventional small hatchback. They also like the ruggedness and style of an SUV and the higher and more versatile seating layout of an MPV, but want the lower running and taxation costs of a supermini hatch.

Another 'must have' requirement, started by MINI and continued by Fiat but now part of most manufacturers' planning, is personalisation. As demonstrated by 50% of Clio customers taking these extra features to make the model of their choice.

In addition to the core Expression and Expression+ Captur models, and the likely best-selling Dynamique MediaNav and Dynamique S MediaNav levels of specification, the Captur personalisation programme adds the choices of Arizona, Miami and Manhattan combinations of interior and exterior bodywork colours, wheels, trims and decals — all giving the Captur endless permutations to be kitted out for life in the urban jungle.

Moving to Expression+ takes things up a notch with front fog lights, body-coloured door mirrors and handles and hands-free keycard. It also features auto lights and wipers and climate control.

The likely UK best-seller, Dynamique MediaNav, brings in the world of personalisation as well as zipped seat covers which can be simply wiped or washed. They can also (good thinking!) be replaced to freshen up the interior come resale time. Its personalisation comes in the form, among others, of a chrome colour pack covering the headlight surrounds and tailgate strip, plus centre console, air vent and gearlever gaiter surround.

The significant omission is for the option of four-wheel drive or an alternative grip control 2WD system as Peugeot offers for the new 2008. That noted, Renault is now considering offering such an option and they do have a Grip Xtend traction control system in their Scenic MPV range.

Renault's initial decision not to include it in the Captur's long list of options was based on the fact that in the UK just 4% of Nissan Jukes are sold with 4WD.

With our disintegrating road surfaces and erratic and changing weather conditions bringing more flooding, and with less treatment for our ice-and snow-covered winter roads, rural customers at least would willingly pay a bit extra for the added peace-of-mind provided by a modern on-demand 4WD system or at least a simple added front-wheel drive traction system which generally includes tougher, grippier and more durable tyres.

Renault sees the Captur as appealing to a young family urban audience. I disagree in part; why restrict its appeal by pigeonholing it — open up its attraction to rural dwellers young and old.

On the subject of choices, there are currently three turbocharged engines to choose from including the all-new 1.2 TCe 120 four-cylinder petrol EDC automatic. Joining it is the 0.9 TCe 90 three-pot petrol and the 1.5 dCi 90 four-cylinder diesel. An EDC dual-clutch version of the dCi 90 will follow later in 2013.

Improving fuel economy and helping to drive down emissions still further, Stop&Start is standard on every manual transmission Captur. The dCi 90 also sits conveniently under the 100g/km VED band — meaning there's no road tax in either the first year, or currently, beyond.

The Captur is most likely to be bought by retail customers where price matters but not at the expense of reasonable performance, so the 1.5-litre dCi 90 diesel with Stop&Start, giving an official 76.4mpg with only 95g/km emissions, would be my choice, especially as the Expression version costs an appealing Ł13,895.

Its higher torque output of 162lb ft from 1,750rpm makes it more responsive to drive, really flexible at low in-town speeds with good pick-up midrange and should, in real-life, return around 60mpg.

There is always the choice of the tiny 0.9-litre, three-cylinder TCe 90 petrol engine which carries the lowest purchase price (from Ł12,495) and, being a retail car, this is likely to be the best-seller.

But I would suggest it's worth paying the extra Ł1,400 and going for the more responsive 1.5-litre dCi 90 diesel engine which will nicer to drive, better for fuel economy and has lower taxes.

Against? No 4WD or Grip Xtend system, no lower spec model with this 118bhp TCe 120 engine and no manual gearbox option, fidgety ride, and cornering bodyroll. Some versions plus options also look too expensive.

On the plus side, the Captur brings quirky but pleasing styling both inside and out, it's roomy with a good sized boot (377 to 1,235-litres), the elevated seating and good visibility make it easy to live with, and there's a wide range of personalisation options.

Whichever version is chosen the Captur should be a strong sales competitor in this new sector. It has quirky 'notice me' looks, the handling is nimble although the ride is fidgety — not uncomfortable, but it feels less settled on country roads. And at just over four-metres in length it is relatively roomy with a large boot. — David Miles