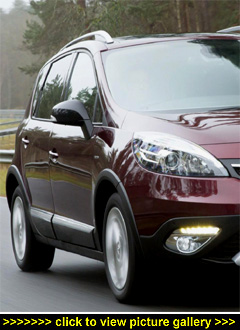 “While Renault’s third-gen Scenic
and Grand Scenic models are
essentially five- and seven-seat
‘people carriers’, the strangely
named XMOD (sounds a bit
like an army surplus buy) is their
new ‘butch’ brother...”

THE SPACIOUS AND GRIPPY Scenic XMOD costs from Ł17,955 to Ł22,100 and comes in Expression+ and Dynamique TomTom trims along with the option of several lifestyle add-on packs. Depending on the spec, there's a choice of five engines to choose from. Six-speed manual gearboxes are standard on all models although the 1.5 dci 110 turbodiesel also offers a six speed auto for an extra Ł1,100.

The XMOD's USP is that it comes with a control for driving over three different kinds of terrain. Manually activated using the rotary knob on the centre console, three types of assistance can be dialled-up. In 'Expert' mode, the XMOD's Grip Xtend traction control system manages the braking system, while leaving the driver in full control of the engine torque.

The 'Road' mode offers conventional traction control settings and this default mode automatically reconnects at speeds of over 25mph. The 'Loose Ground' mode optimises braking control and engine torque control depending upon the available grip. In support of this, the standard 16-inch wheels are fitted with mud-and-snow tyres.

I have just had a seasonal (Wintry) driving spell in the Scenic XMOD 1.5 dci 110 Stop & Start manual with Dynamique TomTom specification.

My test XMOD was also fitted with the Ł1,500 Bose+ Pack along with a few more options such as the emergency spare wheel, electric panoramic sunroof and metallic paint.

As standard this car costs Ł21,095 but with the Bose+ Pack and other extras that jumped to Ł25,695. Enough, in fact, to buy you a Nissan Qashqai or any one of a number of other 'proper' 4WD crossovers.

XMOD owners shouldn't, however, get carried away with the added traction capabilities. It works fine, in a simple sort of way, with just a bit more grip than a conventional front-wheel drive vehicle.

It will sharpen up the steering grip on ice, help pull away from standstill in mud and snow, and reduce aquaplaning in standing water — but it is no off-roader, or even intended to be one. It looks purposeful, what with its taller stance and protection plates, but it doesn't stand out visually as either a crossover or a Multi Purpose Vehicle.

Inside it's relatively roomy, with seating for five. With the rear seats in use there's 470 litres of space but with all three rear seats down (they fold independently) this goes up to a huge 1,845 litres — impressive for a vehicle only 4.4-metres in length.

In addition there are lots of storage pockets and compartments so it is, as they say, 'family friendly'. The instruments are clear to see; the multitude of steering column-mounted controls less so.

The most annoying feature is the Lane Departure Warning: its warning chime is really annoying, intrusive and far too sensitive — and it went off without even crossing the white lines of a driving lane. Worse, it didn't appear as though it could be switched off.

As for driving, in its XMOD guise the Scenic has lost some of its ride comfort and handling finesse. Being on a taller suspension increases cornering body roll and the larger (optional) 17-inch wheels created a firm and not very compliant ride. So going the XMOD route with the Scenic is a bit of a compromise.

The 1.5-litre dci common-rail turbodiesel engine is well known in the Renault, Nissan — and now Dacia — ranges, and has a reputation for being responsive for its size with the potential for really good fuel economy allied to low CO2 emissions.

However, in the Scenic XMOD the 110bhp version seemed to struggle at times. The final drive gearing, or perhaps the fourth to sixth gear ratios, are too high. This, of course, is done to achieve attractive official fuel economy and low CO2 figures. But in real-life driving on rural A- and B-roads the constant need to change up and down gears proved to be really tiresome. Its 177lb ft of torque should easily have coped with providing acceleration without dropping down two gears — but it didn't.

Neither did it seem to be that fuel efficient in real-world conditions. Officially this model will return 68.9mpg in the Combined Cycle but my test driving on motorways as well as some short runs on A- and B roads resulted in a poor 45.9mpg average. For the record that was, for most of the time, only with me alone in the car so no passengers adding extra weight.

With CO2 emissions of 110g/km, road tax is Ł0 in the first year and then only Ł20 per annum for year two onwards.

As for the top speed, it's officially 112mph so the legal 70mph cruising speed on motorways was easily coped with but the zero to 62mph acceleration time of 12.3 seconds is no more than adequate.

Whether it's the size, weight, mud-and-snow tyres or gearing that has dulled this engine's performance is difficult to say; it just wasn't that enjoyable to drive.

Against? Expensive over other Scenic models, sluggish engine response at low to medium speeds due to high gearing, not very fuel-frugal in real-life motoring conditions, harsh ride due to optional 17-inch wheels and mud-and-snow tyres, apparently no way to switch off the intrusive Lane Departure warning.

On the plus side, the XMOD extends the choice of models in the Scenic range, is cheap to tax, the Grip Xtend system delivers added traction, plus it's roomy with lots of load space, well equipped, and comes with chunky, rugged styling. — David Miles