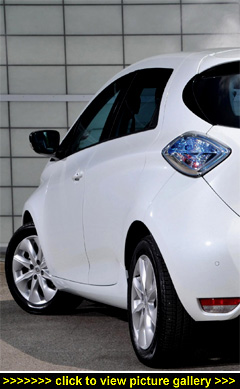 “Can Renault’s new ZOE boost the
so far less-than-viable sales of
electric cars in the UK — just a few
thousand units despite the
Government’s Ł5,000 purchase
discount, the millions poured into
Nissan’s Leaf facility and their UK
battery plant, plus financing the
nationwide charging infrastructure
to the tune of Ł37 million?”

BEFORE CHARGING IN to how the all-electric ZOE drives, a quick look at the current state of the EV (electric vehicle) market in the UK.

Firstly, as of 1 July, changes to the London Congestion Charge means that from now on only the owners of zero emission and those vehicles below 75g/km will not have to pay the Ł10 a day charge. Even hybrids and low-CO2 diesels do not comply, so an estimated 20,000 drivers who were previously exempt will now have to pay the Congestion Charge, adding up to at least an extra Ł2,500 to their annual motoring costs.

Secondly, with customers reluctant to buy electric cars due to their price and worryingly low driving range, especially in cold weather, BMW will enter the market this year with their 'i' range.

With a premium brand in the running this should give EVs an image lift and, hopefully, promote confidence in their viability.

Thirdly, POD-Point, the installer of charging points for electric vehicles, has used the current heatwave as a timely reminder that the nation's 450,000 households with solar PV systems could use the electricity generated to provide miles and miles of free motoring.

Of course PV system do not need sunshine to operate as any light works all the year round. However, using the electricity generated through a PV system could take years off the payback time for solar installations, especially as POD-Point, in association with the Government's Office for Low Emission Vehicles, will provide one of their vehicle charging points completely free of charge to households equipped with solar PV.

POD-Point's comparison cost saving figures, using a Nissan Leaf electric car versus a petrol-powered one achieving 51mpg, shows that with a 10kw PV system, an electric car owner could, over 34,000 miles, save Ł3,702 a year whereas a petrol car owner would spend out Ł4,084 on petrol. At the other end of the scale, a 1kw PV system would save the owner covering 3,400 electric car miles Ł370 against a petrol cost of Ł408.

So Renault's introduction of their ZOE electric-powered supermini is very timely indeed — and a potential game-changer for their electric vehicle sales in the UK.

The ZOE joins Renault's electric vehicle line-up which is already made up of the uniquely styled two-seat Twizy (from Ł6,895), the more conventional Fluence saloon (Ł17,845), and the Kangoo ZE van priced at Ł12,995 excluding VAT. A Twizy Cargo van is coming later this year and will cost Ł6,241 excluding VAT. All these prices include the Government's Plug-In vehicle grant.

The five-door ZOE compares in size to the conventional Clio but underneath is a bespoke platform with a pure electric powertrain that uses a 65kw (88bhp) electric motor and single speed gearbox driving the front wheels. It also has electrically-assisted steering and energy harnessing brakes.

ZOE comes with its own charging cable and can be topped up or recharged overnight to give a range of between 60 and 90 miles, depending on weather and use.

It is also one of the few vehicles now qualifying for exclusion from the tough new London Congestion Charge which has hit hybrids and conventional petrol and diesel cars that were previously exempt or that only incurred a modest daily charge.

Fully charged and in the right conditions, the ZOE will reach 62mph from standstill in about 13.5 seconds and run to a maximum 84mph.

That lively performance and reasonable range has been achieved because it was designed from the outset as a pure electric model. It is comparatively lightweight (1,468kg), has ultra low rolling resistance tyres and an on-board heat-pump to turn unwanted heat into energy which it can utilise.

The ZOE attracts the UK Government grant towards its cost so the three model range of Expression, Dynamique Zen and Dynamique Intens cost from Ł13,995 including the Government's Ł5,000 grant. There is a four-year, 100,000-mile warranty and a lifetime warranty for the rented lithium-ion battery.

Renault has drawn up a unique battery rental-only proposition for ZOE, which removes a big unknown cost for users, and costs from Ł70 per month over three years with a 7,500-mile limit. Although the battery rental fee might seem high, it only equates to around the same as one tank-full of fuel for a Ford Fiesta 1.6 diesel.

A free domestic Wall-Box charging point installed by British Gas is included in the price with every ZOE.

Now, say bonjour! to ZOE. ZOE looks eye-catching but not eye-popping or quirky like its Twizy stablemate. There is room for five in a ZOE and it's quite a useful and practical design. And it's easy to get into, fairly roomy in front (but less so behind), and the boot (338 to 1,225 litres) is suitable for a couple of cases or a lot of shopping bags at the weekend. There's also reasonable oddments room throughout the cabin.

Starting is straightforward with a key-card but its silence is, after a regular engine, rather eerie at first. It moves off very smoothly when drive is selected — the only noise comes from the tyres crunching gravel or brushing tarmac. In town it can emit a warning sound below 18mph to alert pedestrians.

There is no gearchange/clutch to delay progress or increase noise levels; just push the accelerator and you're off. It pulls strongly thanks to the 162lb ft of torque available from just 200rpm, and can cruise easily with main road traffic. Top speed is 84mph — but remember, the faster you drive the shorter the driving range.

The brake pedal effort sometimes feels odd and inconsistent as the system also recharges the battery, and the steering also felt slightly different to normal. However, it handles safely. It also rides slightly stiffly but still comfortably, and visibility for the driver and passengers is good.

Driving range is the big issue for the majority of would-be electric car owners but commuters, the ideal target audience, rarely cover long daily journeys outside the ZOE's scope.

The charging time, depending on the kw power level of the charging point, can take as little as half an hour to 80%-charge the battery; most owners charge overnight at home although more and more people will now take the opportunity to charge up either at work (if a point is available) or at one of the ever-increasing Government-financed 1,700 public charging points. Some locations, mainly shopping centres and restaurants, now offer free charging.

Over a comparatively short 30-mile rural route we saw the available range drop only slightly from its initial 60-mile projection. For a conventional commuting day, and providing you could top up or recharge the battery as necessary, the ZOE offers a real alternative to conventional superminis.

And with the likes of BMW now entering the electric car market, such vehicles, backed by huge amounts of UK Government funds, will gain a much higher profile so perhaps it's time to switch on to at least considering battery power.

Against: Firm ride with road noise intrusion, Ł70 monthly battery rental up to 7,500 annual miles (and up to Ł93 per month for 12,000 miles), unproven long-term future for electric vehicles.

Reasons to 'go electric' are the ZOE's low running costs and zero taxes and, of course, the affordable purchase price. It also has a practical design and it's comfortable and easy to drive. — David Miles