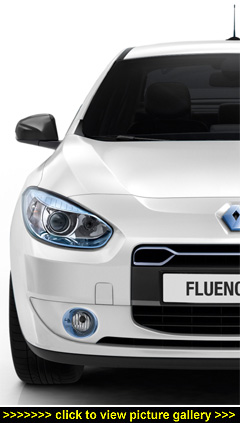 “Sales of electric vehicles haven’t,
to date, shown much of a spark.
So can Renault’s all-electric Fluence
influence more buyers to drive
electric-powered cars...”

DESPITE THE Ł5,000 GOVERNMENT subsidy paid to each buyer of an electric-powered car, just 1,082 electric cars were sold here last year. And since 2006, the total number of electric cars bought in the UK only comes to 2,149 — that's roughly one for each of the currently-available 2,500 charging points. So, at the present moment, the UK has more power points than cars to plug into them.

But more electric cars — and more choices to tempt buyers — are appearing: Nissan's Leaf, introduced last year (it costs Ł25,990 after the Ł5,000 grant) generated 640 sales and it outsells the Citroen, Mitsubishi, Peugeot, and other electric-powered models. Coming shortly is a plug-in Ford Focus and the list of petrol/diesel hybrid models continues to grow.

Which brings us to Renault. Following the recent introduction of their Kangoo Z.E. (zero emission) electric-powered delivery van, you can now buy a battery-driven four-door saloon — the Fluence Z.E.

But why such a big difference in the prices of the Fluence and the Leaf? While they use more or less the same powertrain, customers pay more for a Leaf because they're also buying the battery. Fluence owners buy the car but rent the battery on contract rental terms for periods of 12-60 months with 6,000-18,000 annual mileage options.

These direct debit battery rental costs range from Ł76 to Ł153 a month. The most common rental period is for 36 months with an annual mileage of 9,000 miles and it costs Ł89 per month. A 6,000 annual mileage monthly cost is Ł76.

The battery has an estimated life of 8-10 years but under the rental agreement will be changed free-of-charge if or when it becomes less than 80% efficient.

With a fully-charged battery the Fluence has a range up to 115 miles and is likely to be used as a commuting car or as a second car.

However, the major disincentive to owning an electric-powered car has, and remains, the short driving range, followed by the high purchase price (over a conventional petrol, diesel or hybrid of the same size), shortage of charging points, and the high cost (currently around Ł900) of installing high-capacity charging facilities at home.

While the all-electric Fluence's Ł17,495 starting price partially addresses the purchase price issue, it does not include the price of the battery which, as mentioned earlier, has to be rented from Renault — at a typical monthly cost of around Ł89 for a three-year, 9,000 annual miles period.

With 115 miles being the official figure, the driving range is still clearly an issue for many potential buyers. The range can, of course, vary with use — from 60 miles on a fast motorway trip to 125 miles for low-speed in-town commuting without the use of too many battery-sapping functions such as air conditioning.

A full battery recharge takes between six and eight hours. And for this Renault recommended using the Wall-Box system from British Gas (its preferred partner for providing recharging systems and infrastructure). This is part of the Fluence's cost efficiency, using lower tariff electricity by scheduling recharging during off-peak hours. Depending on the electricity supplier's rate, a full charge will cost approximately Ł2.50.

By using an optional EVSE 10amp battery connecting cable, Fluence Z.E. can also be recharged from conventional 240V, 13amp power supplies at workplaces, at roadside charge points or at home (conventional DIY extensions cables can't be used). Three hours charging will be sufficient for around 25 miles but a full charge from a 13amp domestic ring-mail plug can take around 11 hours.

Sitting on an extended Megane platform (increased by 1,300mm to 4,750mm), the built-in-Turkey four-door, 4/5 person Fluence is of a similar size to a Ford Mondeo and looks pretty conventional with sculptured side panels, although the boot extension does not look fully integrated into the overall design.

Inside it's style and equipment is typical of what you'd expect from the Megane, with lots of kit and comfortable seats. The Fluence's battery pack takes up a large proportion of the space behind the rear seats although not at the expense of rear legroom. However, it does eat into boot space — there's only a fairly modest 317 litres but given that it will only be used for short distance commuting that shouldn't be an issue.

At the heart of the Fluence Z.E. is a 70kW 93bhp electric motor that also serves up a prodigious 166lb ft of torque from just 400rpm (yes, 400), making the car well suited to the cut-and-thrust of urban traffic. It's also a comfortable cruiser.

Drive is to the Fluence's front wheels via a seamless CVT auto transmission with the normal Park, Reverse and Drive positions. The great thing about an electric motor is that all the power and torque is available immediately so it's quick off the mark. But the faster you drive the more battery power is consumed and, with a limited range at best, drivers will generally take things very easily with frequent glances at the remaining driving range.

Range Anxiety, it's called — I found I was constantly checking the range readout and even adjusted the route of my 20-mile test drive accordingly (a short stretch of busy A-road sticky with commuter cars, a section of motorway and some country lanes). Not only that, but I was reluctant to use the heater, the air conditioning or even turn on the radio.

When I started my test drive the battery indicator showed nine-tenths charged but after driving twenty miles the needle was down to sixth-tenths of charge remaining, which rather suggests less than 100 miles would be possible.

But the really unsettling thing was the 'range-left' readout, which at the start had been 64 miles, dropped after 20 miles to just 33 miles — at that point I headed back to base at a gentle pace.

The real-life range of these vehicles is the core issue here; made worse by the fact that, as confirmed by my colleagues' experiences with other electric vehicles, winter weather can also reduce the actual driving range. Batteries, as we know from our mobiles and computers, do not operate to their full efficiency in cold weather.

Turn the key, engage drive and off you go — but watch out for pedestrians, because the Fluence moves quickly and quietly and they won't hear you coming! A comfortable ride but I wouldn't be comfortable owning one as a commuter driver, given the likelihood of traffic hold-ups, diversions, and the need to use the heater or AirCon in adverse weather (hot or cold) and all the time seeing that range meter getting closer to zero miles left.

Reasons you might be influenced by a Fluence include the European styling and typical Renault interior, good ride comfort, easy to drive and the essential operating range indicators. It's also cheaper than Nissan's Leaf, plus there's no road tax, company car tax or London Congestion Charge.

Reasons not to join the electric revolution (at least not yet): more costly to buy and then rent the battery than owning a conventional petrol or diesel engined car of the same size, unpredictable driving range, only really a commuter car for short journeys.

For some owners the Fluence will work, for others the new clean technology used for the latest petrol and diesel engines, or hybrids, or the new range-extender petrol generator-electric models such as the Vauxhall Ampera and Chevrolet Volt will be more practical. And a lot more more reassuring. — David Miles