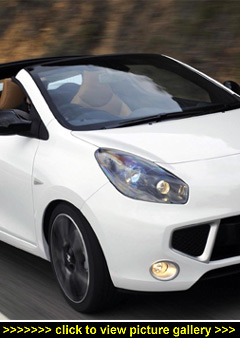 “Renault’s choice of name for its new
roadster has everything to do with
the stuff that flows through your hair
on a summer’s day. And Renault’s
take on the convertible format is
novel: a coupe that can transform
itself into an open-air roadster at
the press of a button...”

IT'S NOVEL BECAUSE THE ROOF PANEL gets swallowed by the boot lid: the rear deck simply hinges from the back and the roof arcs up and over into it. When folded away, there's no evidence that it was ever there.

The process of folding the roof is pretty painless, although it's not fully automatic. You need to manually twist a handle above the windscreen frame and then press a button on the centre console. The roof then takes twelve seconds to disappear — that's speedy compared to most coupe-convertibles.

Did I say the roof system was novel? Actually, it's not really innovative at all. Proving that there's nothing new under the sun, this is almost exactly the same system used by Honda 18 years ago in its open-roof CRX.

The clever bit I guess is that, unlike many hard-roof convertibles, there's no loss of boot space once the top is down. Regardless of whether the roof is up or down, Wind owners can fit 270 litres of whatever it is they carry in the boot.

The downside of the roof layout is that visibility suffers quite a lot. The fixed glass rear window is tiny, and the rear 'buttresses' really obscure your over-the-shoulder view.

The cabin will be very familiar to anyone who's sat in a Renault Twingo because it shares many of its controls and switchgear.

However, the dials and dashboard are unique to the Wind, although the quality of the materials is more 'city car' cheap than 'stylish car about town'.

You sit quite high up in the Wind, although the tall waist-line disguises this. In fact you feel pretty enclosed by the car, which is a little strange considering the raison d'ętre of the Wind is of being open to the elements…

Mechanically, the Wind is based on Renault's baby Twingo. That has good points and bad points. The good news is that it's very entertaining to drive. Its front-wheel drive chassis — tuned by the messieurs at RenaultSport — is just as feisty as the Twingo's, offering sharp handling through bends and a 'chuckable' feel. Its electric steering may not have the best feedback in the world but overall the Wind is very light on its feet and likeable on twisty back roads.

With the 133bhp 1.6-litre engine from the RenaultSport version of the Twingo, the Wind has enough power, if not to blow you away, then at least to ruffle your pleasure feathers. Zero to 62mph comes up in 9.2 seconds, which is decent enough considering the Wind weighs 150kg more than the Twingo it's based on. You can buy a 1.2-litre 99bhp version too, which is of course more leisurely.

The bad news is that extracting zippy acceleration comes at the expense of cruising comfort. The problem lies with the five-speed gearbox, which has such manically buzzy ratios that the engine always seems like it's at full tilt. For instance, at 70mph in top gear, the engine is spinning away at almost 4,000rpm.

Speaking of noise, if you opt for the most windy roof set-up — roof down; both windows lowered — the rush of air coming into the cabin feels more like a hurricane. The hockey-stick shape of the window frames seems to blast air straight into your ears. Simply lifting the windows alleviates the problem but then you've effectively got a car with a sunroof, rather than a convertible, which seems a shame.

The rigid bodywork means there's not as much scuttle shake as you get in some convertibles, but it's still there, so overall refinement isn't a strong suit.

That said, the Wind does look sensational on the road, and that, I think, is its main selling point. There's something about the fluid lines of the shape that does evoke flowing air, which is all rather fitting.

At Ł17,300 for the 1.6 Dynamique version I tested, the Wind is on the pricey side. Two-seater roadsters cannot help but be compared with the doyen of the breed, Mazda's MX-5, and it must be said that the Japanese roadster offers many more thrills in the handling department for the same money (the similarly powered MX-5 1.8 costs Ł17,245). But then the MX-5 doesn't have the Wind's blow-me-away looks, does it?

That's where Renault's newcomer really scores. In a very style-conscious market segment, the Wind has all the right airs and graces. In fact, in sales terms I'm sure it'll be an absolute breeze. — Chris Rees