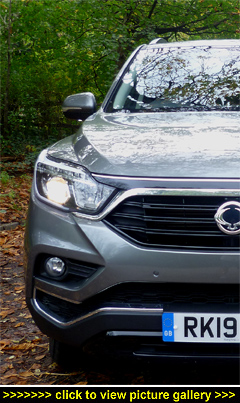 “SsangYong’s Rexton SUV has
earned itself a reputation for being
both unbreakable and able to go
anywhere. So can this tough-guy 4x4
also cut it as a city slicker?”

ACTUALLY, IT CAN PLAY both roles. And the icing on the cake — putting one on your drive won't cost an arm and a leg. Prices start at just Ł30K for a five-seater manual; for the seven-seat auto in mid-range ELX trim, as reviewed here, you'll need to splash a bit more cash: Ł36K. But even that's something of a steal given the amount of space and kit underscored by SsangYong's five-year limitless mileage warranty.

You don't have to get up close and personal to appreciate that the near five-metre long Rexton is somewhat imposing. As they say in all those classic westerns, 'he rides tall'. Fronted by a distinctive horizontal grille flanked by cut-in projector headlight units with integrated LED daytime running lights, its flanks are defined by strongly sculptured wings and defined shoulders. It's a case of the likeable rogue syndrome — but one that takes the sting out of its 'don't mess with me' looks.

Depending on your needs the Rexton can be specified with either five or seven seats. Go for the five-seater and, oddly enough, you'll sacrifice a few litres of maxed-out loadbay volume: with its rear seats folded the 5-seater offers 1,977 versus the 7-seater's 1,806 litres with rows two and three all fully down.

Big on the outside, big on the inside. That's the Rexton, and it ensures it's perfectly configured to carry out its principal duties as a fully-fledged family wagon. Climb aboard and you'll find more than just an abundance of space — the interior is well fitted out with an appealing mix of trim including woodgrain inserts and Nappa leather that makes the cabin a pleasant place to spend time.

The Rexton is well equipped with kit too, and climate-wise there's plenty to counter the UK's unpredictable and chilly weather — in addition to heated seats for your second-row passengers as well as those up front (which warm very fast and deliver full three-stage coverage) the driver is cosseted by that very undervalued feature — a heated steering wheel rim.

If you've not had one before we should point out that they're not just indispensable in cold weather but so good for keeping your hands relaxed on long trips even when there's no snow on the ground — try it sometime. Also keeping you agreeably 'conditioned' is the standard-fit dual-zone climate control which is brilliant for those baking hot summer days when its icy blasts restore the will to live.

Upholstered in Nappa leather, the front seats are shapely and well-padded with bolstering that keeps you located without pinching and they proved to be both comfortable and supportive especially on extended journeys; full power adjustment with powered lumbar and height-adjustable belts ensure you can match your body to the seat perfectly. A fist-and-a-half of headroom, plenty of elbow and wriggle room and big footwells with a comfy left-foot rest plus high-off-the-floor seating all boost that 'in command' feel. Sitting behind the helm in such a big beastie there's a beautifully clear view down the Rexton's big wide bonnet that makes it a doddle to place both on and off road.

The flat-bottomed multifunction steering wheel offers safe fingertip control of the driver's display, infotainment, phone, etc, and its comfortable girth and good thumb cut-outs make it good to grip. Though its upper arc is a logical digital instrument panel that's easily customisable. Trad-look clear white-on-black 3D-effect dials for revs and speed sit either side of a multi-choice driver's information display that can be switched between a large road speed readout to navigational prompts and warnings and your personal choice of dials.

Posted roadside speed signs are also recognised and shown, helpfully turning red if the limit is exceeded as well as flashing on the driver's screen whenever the limit changes. And the system is eagle-eyed — even temporary roadworks speed limit signs were picked up.

Comms are comprehensive and accessed via the large 9.2-inch infotainment touchscreen set in a refreshingly uncluttered dash; graphics are sharp and crisp supported by foolproof menus and, in SatNav mode, easily followed TomTom 3D mapping so you always know exactly where you are and what's coming up.

Apple CarPlay and Android Auto are included as too is a reversing camera, Bluetooth, a DAB radio, and ample connectivity ports and power sockets (both 12v and USB charging). Finally, finding places to stow all those personal items is no challenge thanks to a multi-storage tray at the base of the centre stack, siamesed twin dual-use cupholders, a big drop-down glasses case, a large box with lift-out top tray under the wide armrest between the front seats, accommodating door bins that hold not just one but two full-size bottles, and another useful cupholder-cum-deep tray in the door pull.

Kit-wise you get plenty for your money. In addition to that mentioned elsewhere such as leather upholstery, electric seats, four heated seats and steering wheel, onboard SatNav, front parking sensors, reversing camera with rear sensors, etc, the mid-range ELX models come with keyless entry and start, cruise control and speed limiter, electric parking brake with auto-hold, drive-off automatic door locking, auto-dimming rearview mirror, tinted glass to the front and privacy glass from the B-pillars back, electric windows (the fronts have one-shot up/down op), powerfolding heated door mirrors (on demand and automatically on locking and leaving), shark fin antenna, high gloss skid plates under the front and rear bumpers, and a set of 18-inch alloy wheels.

Most sports utility vehicles now use a monocoque chassis but for go-anywhere toughness the Rexton sticks with the tried-and-tested body-on-frame construction. It doesn't stop there and throws in nine airbags (the most in its class and including one for the driver's knee) plus plenty of safety assists such as autonomous emergency braking with forward collision warning, lane departure warning, traction and stability control, hill descent control, and the likes of hill-start assist, tyre pressure monitoring, automatic main/dip beam switching, lower windscreen de-icer, auto lights and wipes, daytime running lights, and LED taillights. A particularly nice feature that you rarely come across is the sliding extensions on the sun visors — a real game-changer when you're driving into the sun.

Entry and exit to and from the middle row of seats is no problem; roof-mounted damped grabs and assist handles on the B-pillars are there if needed but the sheer size of the wide, deep doors mean few people actually need to use them.

Once seated there's a comfy drop-down centre armrest for two to share and masses of room in all directions; loads of foot room and if you want to stretch your legs then just go right ahead. Headroom is also generous (there's a full fist of it) and the headrests are comfy enough for you to just lean back into the seat and chill — naturally it helps that the backrests recline (all the way down to 45-degrees). If you're awake, the passing world can be viewed through the long, deep side windows. It goes without saying that seating three side-by-side is eminently doable.

Reinforcing the 'home from home' feel is a wide drop-down centre armrest with siamesed cupholders and a useful lidded storage tray, your own climate controls, big pouches on the front seatbacks, and large bottle-holding door bins. Other well-considered touches include lower door sections that keep the sills (and hence your clothing) clean in dirty weather, a 2-pin 220v socket and a USB charging port and, of course, Isofix child-seat mounting points.

Those travelling in the third row of democratically 50:50-split seats can reach them without any rock-climbing skills courtesy of large rear doors and 60:40-split second row seats that fold and tumble forwards. While kids will race to 'bag' themselves these seats, slim adults might be surprised to find that they too can travel there for shorter journeys. Making travelling in seats 6 and 7 even more sociable are independent temperature controls and adjustable air-vents.

Riding in this big SUV is pretty good with the engine virtually unheard at the legal limit and motorway miles smoothly gobbled up — accommodating family and towing aside, long trips bring out the best in the Rexton. And being up for hauling a massive 3,500kg, its ride actually benefits from running with a full load — cargo or peeps.

Picking a powerplant is a no-brainer because there's just the one — a four-pot turbodiesel that puts out 178bhp backed-up by a stump-pulling 309lb ft of torque. But this Hobson's choice is not a problem because the 2.2-litre unit is a laid-back operator, ably partnered by a Mercedes E-Tronic seven-speed autobox to take care of the shifting business. You won't have any complaints.

Changes made by the refined automatic gearbox are quick, clean and smooth. If you want to take back control you can use the selector lever into its manual mode; hardcore cog-swappers can always specify a six-speed manual gearbox. Top speed is a perfectly okay 115mph and it will crack 0-60mph in 11.9 seconds.

Venturing off-road in the Rexton holds no fears given its über-tough construction, selectable all-wheel drive (with 'real McCoy' locking differentials and a low range 4x4 system which splits driving torque 50:50 between the front and rear axles for max-trax) and a trustworthy hill descent control system to manage tricksy downhill tracks. Add in effective ground clearance and good wheel articulation and the Rexton almost dares you to 'break me if you can'. Don't worry, you won't.

For road use it's a capable and easy-to-pilot machine. There are Winter and Summer drive settings, 2H and 4H drivetrain modes (selected via an easy rotary dial) and, notwithstanding decent grip, a bodyweight that keeps it reassuringly planted on the blacktop even in a howling gale. It handles well and the speed-sensitive steering is sensibly geared which helps make light work of any towing duties you care to throw at it — even when tasked with hauling its maximum braked capacity.

The Rexton's boot is huge: seven-seaters have a commodious 649 litres but five-seaters have even more — a whopping 820! Both five and seven seat versions will take you and three golf-loving chums (along with four golf bags in the boot) to the clubhouse in one vehicle. When even more loadspace is called for just drop the lot and you can take advantage of the seven-seater's seamless and completely flat-floored 1,806-litre loadbay. Also coming in handy for oddments or keeping valuables out of sight is the full-width underfloor area beneath the main boot floor that's easily accessible without lifting the rearmost floor panel.

A rollerblind cassette keeps your luggage hidden from prying eyes but if you prefer to carry your gear outside then there's a pair of black and silver roof rails. For real cargo or a large caravan, horsebox, or workhorse trailer, the Rexton beats just about every other SUV out there, being happy to haul a commercial-grade braked 3,500kg.

A real-world seven-seater underpinned by SsangYong's 65 years' of 4x4 expertise, the Rexton is an honest all-weather set of family wheels. Throw in oodles of standard kit, a roomy and comfortable cabin, rugged character and competence, and the peace of mind that comes with a five-year unlimited mileage warranty and it's hard to find anything for the money that gives you so much. ~ MotorBar