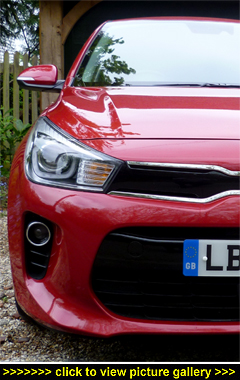 “The new Rio is Kia’s entry in the
supermini stakes. Powered by a
new turbocharged 1.0-litre petrol
engine as part of a range of more
efficient petrol and diesel engines,
it eagerly takes on the best of the
pack with prices from Ł12K...”

IF YOU'RE SUPERMINI SHOPPING in this sector then this latest fourth generation of Kia's global best-seller offers plenty of reasons to try one out, including more size and space, generous kit levels and all the media and connectivity functions you'd like.

Our range-topping First Edition model was finished in a fetching shade of metallic red which admirably suits the Rio's five-door-only hatchback bodystyle. Fronted by a purposeful nose with a deep lower grille topped by a slimmer, full-width version of Kia's unmistakable 'tiger-nose' panel bracketed by wraparound projector headlights, and clean uncluttered flanks with flat-cut wheelarches filled with standout 8-double-spoke polished alloys, the Rio is crisply contemporary.

Without the bonnet badge, you could be looking at a German marque — no surprise then that Kia's German and Californian design studios both had a hand in shaping its looks.

Two immediate major 'of interest' points: first, engines. With four petrol engines and two diesel units to choose from there's something for everyone. Petrol-drinkers come in 1.25-litre (83bhp) and 1.4 (98bhp) sizes. Giving you 'more from less' are the new 1.0-litre T-GDi turbo petrol powerplants — you can have either 99bhp or 118bhp. And if diesel is your pick you have a choice between 76bhp and 89bhp outputs from 1.4 litres.

We've been driving the 118bhp turbocharged 1.0-litre T-GDi. It's a punchy and refined three-cylinder engine and it drives smoothly; when you're pootling it goes about its business quietly, but when you want to raise the pace it's always keen to oblige, revving cleanly and, helped by a very tractable 126lb ft of torque between 1,500 and 4,000rpm, delivering meaningful get-up-and-go in the low- and mid-range.

Overtaking is straightforward, especially if you drop down a gear, or even two, to keep the turboed one-litre in its sweet spot — no problem given the slick and accurate gearchange action.

At motorway speeds a 'tall' top gear keeps the revs down and the cabin peaceful. For the record, it will nip off the line and pass 60mph in 9.8 seconds, and run on to a top speed of 118mph — so no risk of being left behind in this particular Rio.

It's also pretty good when it comes to economy. Naturally Kia's engine stop-start system (ISG: Intelligent Stop and Go) is fitted as standard. A week's hard driving on predominantly low-gear back roads and quite a bit of town driving saw 44.8mpg recorded. That noted, the average owner's likely kinder treatment of the accelerator pedal should help them move their overall consumption closer to the official combined cycle figure of 60.1mpg.

The second 'of interest' point is the Rio's dynamics... These latest 4th-generation models have a can-do stance that reflects their greater under-the-skin structural rigidity (they use 51% high-strength steel; up from 33% in previous versions). Consequently there's a positive knock-on for the handling.

The front wheels are the driven pair, which imparts predictability and reassuring composure. And, Yes, you can push on — do so and the accurate and agreeably-light-at-town-speeds steering weights up for more demanding wheel-work. With good body control it feels tidy when punted.

Although it doesn't pretend to be a hot-hatch — and most customers wouldn't ever drive it as such — there is satisfaction to be had on more challenging roads along with a reassuring stability on motorways at the legal limit. And when you need to scrub off speed rather than slap it on, the brakes (discs all round, vented at the front) do a great job.

Where the Rio will also score well with its owners is in how it rides — which is compliantly; all but the worst road surfaces are dealt with efficiently, even rolling on the First Edition model's 17-inch alloy wheels shod with Continental 205/45 rubber.

Where this all-new Rio really comes together is in the cabin — inside it feels supermini-PLUS, a feeling boosted by the well-fettled fascia and user-friendly switchgear. Visually striking is the red metallic paint finish to the sculpted fascia with a centred, upright and very easy to see from the driver's seat 7-inch infotainment touchscreen.

There's plenty of space to go round, too, particularly headroom (among best-in-class) and generous outer armrests. The driving position is first-rate with fine all-round visibility helped by slim A-pillars and big side windows and uninterrupted views through the back screen — all of which make the Rio very easy to place on the road.

The interesting mix of trim materials (including matching red faux leather door inserts) is easy on the eye and pleasant to the touch, and there's a palpable sense of luxury pervading the First Edition's cockpit. Nearly every time we returned to the car after parking up we'd find people admiring the cabin through the windows.

Neat touches? There are plenty: the knurled AirCon knobs have their own built-in digital readouts; mobile devices can be charged from any seat, front or back; there's a selectable digital speed readout on the dedicated driver info display between the main dials; the touchscreen has well-laid out menus; and the user-friendly navigation comes with full 7-figure postcode destination entry, 3D mapping, and A1 spoken directions. All small things, but they each make car-life substantially better.

You'll also find plenty of in-cabin storage, with useful bottle-holding door bins, a large glovebox, overhead drop-down sunglasses case, a deep bin under the sliding centre armrest (which, incidentally, doesn't cramp the pull-up handbrake), siamesed cupholders, and a non-slip deep centre console tray ahead of the gearlever for smartphones and the like with USB, Aux-in, and 12v power.

Within its compact 4-metre body the Rio's not just got space for passengers but for their luggage too. And you can access it quickly because the head-friendly fifth door opens high and fast. At 325 litres, the boot's a respectable size and easy to load through the rear hatch; there's a short drop over the lip down to the boot floor, but it's not a problem.

Drop the 60:40-split rear seats (they fold flat and the belts stay helpfully out of the way) and you'll create a well-shaped loadbay that can swallow 980 litres of cargo. The Rio will even tow a braked 1,110kg; and can take 70kg on the roof. A proper (and essential for the UK) rear wash/wipe is yet another 'plus'.

Hatchback it might be, but two real-world adults can travel very comfortably in the back — there's actually enough headroom for even a six-footer's head to stay shy of the roof lining. The rear seats match the front set for two-tone upholstery and light bolstering — and three sitting side-by-side is definitely doable. As well as ample headroom there's good foot and knee room and, thanks to there not being a central floor tunnel, three sets of feet will fit perfectly.

Added to that are relaxing backrest angles, made even better by the good lower back support they provide. Long and deep rear side windows maintain an airy feel in spite of the tinted and privacy glass to the back and tailgate glass, and other 'likes' are the bottle-holding door bins and rear USB charger port.

Fluent to drive, easy to live with, much more accommodating than you'd expect of a compact hatch and satisfyingly well-equipped, the Rio does the 'supermini' job very nicely indeed, thank you. And of course, as with every Kia, there's that peace-of-mind bonus of the best warranty in the business: seven-years / 100,000-miles (less than half of what you get with most rivals). All-in-all that adds up to one major USP. ~ MotorBar