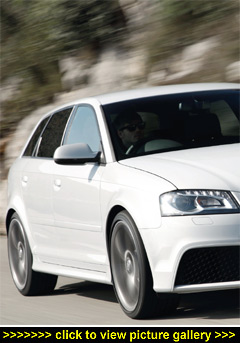 “Audi’s A3 Sportback range has a
new flagship: the Ł39,930 RS 3.
A good buy? Judging by the fact
that all 500 units allocated to the UK
have already been sold, we’d say
that’s approbation with a capital ‘A’...”

THE RS 3 IS THE FIRST COMPACT AUDI to carry the celebrated RS badge. Quattro GmbH — Audi's high-performance engineering division — has used the five-door A3 Sportback as the basis for the latest RS model, and in deference to the classic Quattro has endowed it with a five-cylinder turbocharged petrol engine that utilises 21st century TFSI turbocharging and direct injection technology.

First seen in the TT RS, this turboed 335bhp five-cylinder petrol powerplant channels 331lb ft of torque to the road through a standard-fit seven-speed S tronic twin-clutch transmission and quattro all-wheel drive. A flap in the exhaust intensifies the sound of the RS 3 even further when driven in Sport mode but more importantly the 'S' button also sharpens-up the throttle response.

The RS 3's maximum torque is readily available from around 1,600rpm and remains constant up to 5,300 — making for first rate flexibility and response and is especially useful for passing slower traffic when there's limited overtaking room.

The large turbo generates up to 1.2 bar of boost pressure and for more efficiency it is coupled to an intercooler. The combination of the latest forced induction technology with FSI direct injection guarantees impressive performance: 0-62mph in just 4.6 seconds with an electronically-governed maximum of 155mph.

This performance doesn't rule out the potential for relatively good fuel economy: 31mpg 'on paper' in the Combined Cycle with 28.1mpg the real-life consumption figure during my spirited, no-quarter-given test drive.

However, CO2 emissions are a costly 212g/km — road tax for the first year is Ł580 (reducing to Ł260 for the second year onwards). Business users will pay 32 per cent BIK tax and with a group 42 rating insurance costs won't be cheap. All things considered, a small price to pay for exclusivity.

Weight savings have been made through the use of carbon fibre-reinforced plastic (for the front wings) and strong but light vermicular graphite for the engine block. This has brought the kerb weight down to 1,575kg and elevates the RS 3's power-to-weight ratio to an impressive 213bhp per tonne.

The RS 3's significant performance is easily accommodated by a chassis that places the RS 3 25mm closer to the ground than a standard-spec A3. McPherson struts are used up front with a four-link layout at the back. The firm ride is not uncomfortable and balance and composure are boosted by a widened track while grip is increased by 19-inch alloy wheels running 235/35 series tyres at the front and 225/35s at the rear. If the standard wheel finish — a machine-polished titanium look — is not flamboyant enough for you then you can pay extra and specify a striking black finish with red rim inserts.

The RS 3's electromechanical rack-and-pinion steering serves up a suitably direct response with relatively good feedback. Stopping is taken care of by 370mm disc brakes (internally ventilated) at the business end with 310mm units at the rear — these proved to be strong and fade-free during the high-speed test route in the Austrian Alps where the 'Sound of Music' was the bellowing of the RS 3's exhausts resonating through the mountains and valleys.

The quattro permanent all-wheel drive system allied to an electronically-controlled multi-plate clutch gives the RS 3 extra measures of traction, composure and stability. The quattro system allows 'drive' to be fed to each axle as needed — and whenever slip occurs at one of the axles, an electric pump intervenes and presses the clutch plates together to redirect the 'drive' accordingly.

Owning an RS 3 isn't solely about the performance; it's also about looks and high levels of kit. Presence the RS 3 definitely has: a deeper front apron at the front-end incorporates enlarged air intakes and an anthracite-coloured, single-frame grille with diamond-patterned styling and Xenon plus headlamps.

The side view is dominated by the flared front wings housing 19-inch alloy wheels and prominent sill panels. Door mirror casings have a matt aluminium-effect. At the tail, a high-gloss black diffuser and two elliptical exhaust tailpipes on the left are topped-off by a large roof spoiler.

For me, the RS 3 high-performer has been sanitised too much with the adoption of the quattro all-wheel drive system — some 4WD Audi models have lacked the raw pace and agility when compared to the rear-wheel driven Mercedes AMG and BMW M cars due to the weight and power absorption of their quattro systems.

That noted, during a fast four-hour drive on the demanding winding mountain roads and sweeping bends of Austria's Turracher Höhe, the RS 3 made light work of the task and felt very capable and surefooted. Why the Austrian Alps? Well, in 1978 the first Quattro was 'fired-up' and demonstrated to the Audi Board members on these very roads — as a result they signed-off the quattro technology and the rest is history.

Reasons to buy an RS 3 include the sporty looks and desirability, the high level of specification and surefooted handling with loads of grip, plus it's very fast and easy to drive. While undeniably a good high-performance car it's not an 'edgy' or an involving one.

An RS 3 will get you from A to B very quickly and very securely; it's extremely fast, feels very safe and is responsive and surefooted. However, being so capable takes away some of the extreme seat-of-the-pants driving fun. The RS 3 wants to speak to the driver but it just felt as though it had a gagging order placed on it, apart from the howl of the exhaust. — David Miles