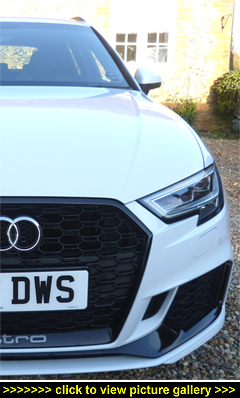 EVERY YEAR ALMOST FORTY million cars jostle for space on the UK's over-crowded roads; traffic congestion, like taxes, is an inescapable fact of life. So why then do driving enthusiasts continue to buy high-performance cars? Escapism? To a degree; but these devotees are more than petrolheads. Born optimists, they're fuelled by the belief that there are still places where you can get pleasure from driving hard — and not just at a trackday.

And anyone who thinks that power always corrupts only needs to drive with a seasoned high-performance driver to confirm that that's just not true — in fact, the majority of those paying speeding fines usually own a run-of-the-mill motor. So you could argue that driving a high-performance car means you're less likely to get caught speeding…

Joking aside, the latest RS 3 Sportback we've been punting around all week is, in real terms, not that expensive given its power (394bhp) and performance (174mph and 0-62mph in 4.1 seconds) although you'll have to hand your friendly Audi dealer a minimum of Ł43K to pocket the keys to one.

Fronting the RS 3 is one of Audi's trademark gloss black, single frame, honeycomb-design grilles with angular-cut LED headlights and those so-cool dynamic indicators that sweep-flash from the inside out. Beautifully flared wheel arches wrap tightly around 19-inch diamond-cut, matt titanium five-arm alloys wearing lo-pro 255/30 Pirellis and, clearly visible, are black-painted callipers with, at the front, RS logos and no-messing drilled and vented discs. Subtle side-sill extensions enhance the hunkered-down stance that's part and parcel of the RS 3's Sports suspension.

The rear tailgate is capped by a roof-edge spoiler and there's a gloss black diffuser with a meaty megaphone-style exhaust tailpipe at each corner, also finished in black, that belong to the extra-cost RS Sport exhaust system. They make for a fabulously growly signature sound that will rattle the neighbour's windows from a cold start and provide a match for anything coming out of the Bang & Olufsen sound system, especially the metallic-edged pops, crackles and snaps your ears are treated to when skipping back down the gears in Sport mode for those times when, were you using a stick shift, you'd be double-declutching.

Interestingly, the RS 3 Sportback outsells the four-door RS 3 saloon by two to one. While the saloon does give off some mean vibes, the Sportback, particularly finished in metallic Glacier White with some well-judged gloss black body finishing, takes the cake for understated street cred.

Inside the RS 3 you'll discover yet another superbly-built and emotively stylish cockpit from the four-ring cabin-meisters. The sportingly all-black theme is made even better by the well-considered mix of quality trim materials, including extra leather and suede, as well as carbon inlays and smart satin chrome highlights and filleting.

The pičce de résistance has to be the gorgeous Super Sport front seats upholstered in black fine Nappa leather with 'quilted' diamond-pattern panels and grey stitching. Along with excellent shoulder support from the backrest 'wings', the bolstering offers just the right degree of location while the three-stage seat heating is very quick to reach its hottest setting and the front of the base cushion extends for extra under-thigh support.

Co-starring alongside the seats is Audi's Virtual Cockpit — the high-res 12.3-inch digital display fills the instrument panel and is brilliant to use, particularly when you choose to display the active SatNav mapping as a functional background upon which the 'dials' (large or minimised) can be superimposed. It's also RS specific, displaying, should you want them, readings for torque and G-force.

The digitised dials are dark grey and black with sharp white shadowed figures that are both stylish and easy to read. On the right sits a speedometer with a large speed readout in the 'gold'; to the left is the rev-counter with, in its centre ring, the selected gear and active Drive Select mode.

Talking of which, you could choose something else but we set the 'fave' button on the wheel to switch between the driving modes as it takes less time than using the button on the dash.

The flat-bottomed, three-spoke wheel earns equal star-billing alongside the seats and Virtual Cockpit — superbly finished in black leather with dark grey suede 'work' sections, it's über-tactile and feels part of you when you're working the helm. Naturally it's multifunction; the gear shift paddles are wheel mounted and exactly where you need them for overtaking 'bursts' or permanently engaged manual shifting up and down the 'box. And not to be overlooked is the spherical palm-fitting gear knob, also wrapped in suede and capped by a RS emblem.

But machinery like the RS 3 isn't intended to dazzle and seduce passengers (although it probably will) — they're targeted at drivers; drivers who really like to get the bit between their teeth. Which brings us back to that roaring 394bhp.

The Audi Sport-fettled RS 3 is powered by a turbocharged, direct injected aluminium five-pot 2.5-litre petrol engine that, in drive-out-of-the-showroom spec, is good for a liberal 155mph; enthusiasts won't baulk at paying the extra Ł1,600 needed to unlock its full potential — doing so gets it derestricted, which means a heady 174mph top-end (the 0-62mph acceleration remains the same, at 4.1 seconds). A dual-clutch seven-speed autobox with paddle-shifters takes care of business, ably aided by Audi's quattro all-wheel drive.

For the record, although the cost of filling the RS 3's tank won't dent anyone's wallet who can afford to buy one, the fact that it's no gas-guzzler is an added bonus and helps minimise time-wastage refuelling on long trips. Officially in the combined cycle, those rarely realistic lab-derived 'guides' suggest you might see 34mpg. A very pleasant surprise then to finish our week with an overall average recorded of 33.7mpg!

The RS 3 Sportback's 394bhp is backed up by an equally persuasive 354lb ft of torque. Better still, the driver has some say about the manner of how this is disbursed through the four driven wheels — Audi's Drive Select modifies the S tronic autobox's gear shift points and the quattro system is capable of sending up to one hundred per cent of the driving torque to the rear wheels.

Audi Drive Select changes the handling and dynamic responses at the touch of a button to suit the way you want to drive, enabling the driver to call up a different mix of settings for the engine and gearshift characteristics, quattro drive system, exhaust flap control, and steering feel via four pre-set driving modes: Comfort, Auto, Dynamic and Individual.

What is a major surprise to many, after clocking the pretty awesome performance figures, is just how docile it can be. Set the Drive Select to Comfort and that's absolutely what you get; yes, even riding on those rubber-band Pirellis.

On the move the RS 3's superbly supportive and comfortable seats, along with a refined drivetrain, transform usually tiresome motorway journeys into a stroll in the park. And Comfort is just the job when the traffic's as sticky as treacle and your Spotify playlist is providing the entertainment rather than the 394 horses corralled under the bonnet and their twin, large-bore voice-boxes.

When the traffic does thin and the roads turn interesting — or as Sherlock Holmes would say: When the game's afoot — select Dynamic and the RS 3's 2.5-litre powerplant will be ramped up and raring to go, eager to dish out the big-hearted torque at its disposal throughout a well spread powerband.

For a passenger not expecting it, the RS 3 feels dragster fast, launching itself towards the horizon with not so much as a warning chirp from the Pirellis; keep your right foot planted and it just keeps on giving well past three figures, the twin-clutch gearbox serving up seamless changes without pausing for breath as it races up the seven-ratio scale.

Of course, power alone is not much use at all; unless it's harnessed… and boy, does the quattro do a great job of that. Cornering at very quick speeds front-end grip is amazing; the rear wheels following through as if on rails, not deviating from the line set by the fronts before you kick in more power, the torque shunting rearwards to ensure 'max-trax'. Naturally the on-board torque vectoring system is singing from the same hymn sheet, favouring the outside wheels during cornering to better the handling balance.

The 4.4-metre-long RS 3 has an overlooked ace in its handling arsenal — it's compact footprint and the good views out, both forward and to the sides through the deep side glass; slim screen pillars frame a perfect view down the bonnet and you can see the top edges of the wings. Taken together they make the RS 3 a doddle to place accurately, even barrelling down tortuously winding roads.

Scrubbing speed is another essential and while our RS 3 'made do' with the upgraded RS items — they worked a treat, unfailingly serving up powerful and progressive braking at all speeds on all roads — for the committed there is the option of the hugely impressive ceramic brakes that for regular track use can justify the additional Ł4,695.

More likely to be used by your front seat passenger (if you have to ask then you shouldn't be in the driving seat) is a sliding and height-adjustable centre armrest topping a slim under-tray with a pad for wireless smartphone charging and a nifty little elasticated net pocket along with some USB and Aux ports; just ahead sits the rotary knob for managing the intuitive MMI interface and which, via its touch-sensitive top, recognises your handwriting and also lets you move and zoom freely on the map, using your fingertip.

Comms and infotainment are well served by the central 7-inch colour MMI infotainment monitor that rises up out of the central fascia on start-up (you can retract it anytime you like). Along with integrated navigation with 3D mapping and dynamic route guidance it can show places of interest, map previews, lane recommendations, motorway exits, and detailed junction maps, etc, plus traffic updates and traffic information online. There's also voice recognition and, on the entertainment front, a Jukebox hard drive with 10GB of memory for music, DVD slot for music CDs and video DVDs, and a DAB digital radio.

Also provided are SDXC card readers and USB charging points, Bluetooth, and seamless smartphone connection for access to your calls, messages, navigation and even Spotify playlists with voice commands or via steering wheel controls.

In an ideal world you wouldn't choose to sit in the back of the RS 3 Sportback. Not because it isn't as superbly finished and as comfortable as the front — because it is — but the front is where the action is. However, if you're just along for the ride then there's plenty to recommend it, not least the same quilted-effect soft leather covering the well cushioned backrests and bases, padded outer armrests, air-vents, netted magazine pouches, usable rear door pockets, damped grabs, and — not really expected — a fist of headroom.

Those needing to ferry youngsters will be glad of the remote activated (via the driver's door switch) child locks on the rear doors as well as the Isofix child seat mounting and top tether points for the outer rear seats (the front passenger seat also has them, obviously for use with the airbag deactivated). There's also decent foot room and three side-by-side is definitely doable.

More so than the saloon, the Sportback fits with real-world elements of family life — the boot is regular shaped and swallows 335 litres of luggage; drop the 60:40-split rear backrests and that expands to a 1,175-litre loadbay (the saloon musters a worthy 315 litres but only 770 litres with the seatbacks down). Using the loadbay is easy — the tailgate opens high and the load sill is just above your knee. You'll also find practical features such as pull-out bag hooks and stretchy nets to keep your cargo in place.

The RS 3 Sportback delivers laugh-out-loud driving enjoyment; it's a delight to be behind the wheel, whatever the driving conditions. A double WOW from what for many enthusiasts is the perfect everyday sports car serving up the perfect adrenaline hit. ~ MotorBar