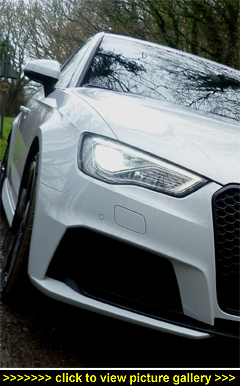 “Years ago a friend was pulled over
by a traffic policeman whose opening
line was: ‘Excuse me, Son, are you
having trouble taking off?’ It’s a
sentiment that might well apply to
Audi’s über-fast RS 3 which scorches
to 62mph in 4.3 seconds and, when
derestricted by a friendly Audi dealer,
will hit 174mph...”

TAKING OFF, THEN, IS CLEARLY NOT A PROBLEM. Keeping your licence could be. Not that there's any shortage of drivers wanting to 'pilot' Audi's superfast family hatch — well before these new RS 3 models were even en route to Audi showrooms in the UK, the bulk of the entire first year's allocation had already been spoken for!

It costs Ż39,625 although our test car came specced with a number of the optional extras that your average RS 3 owner will be keen to add — goodies like the Dynamic Package Plus which includes magnetic dampers for improved ride comfort (Ż2,495) and the fabulous fine Nappa leather Super Sports seats (Ż795), 19-inch five-arm black alloy wheels for Ż895 and the Technology package that includes SatNav and Audi Connect (Ż1,795).

In fact, Audi say that it's the norm for RS 3 Sportback buyers to spend, on average, a further Ż8K on up-speccing.

Even as it comes out of the box, Ż40K buys you serious road presence and serious performance, all enjoyed from within a seriously svelte cockpit. In fact, given the electrifying performance, Ż40K sounds like a pretty good deal indeed!

Audi has made the RS 3, at one and the same time, eye-catchingly standout and brilliantly understated. The five-door Sportback body wears well-judged flared wheelarches — not too big, but just big enough to accommodate the 19-inch alloys shod with ³ber-low-pro rubber.

The nose is pure RS, identified by the trademark black gloss honeycomb grille. Gaping, fully functional meshed ducts feed air to the oil cooler and additional radiator located behind the lower grille. The tail treatment is equally sporting, with a screen-capping rear roof spoiler underscored by a diffuser bracketed by a stein-sized oval tailpipe at each corner.

Inside the RS 3 is still at heart a surprisingly roomy hatchback that will accommodate four or even five with typical high-end Audi quality. In RS guise its impeccably-finished, black themed cabin is crowned by fabulously inviting 'Super Sports' seats.

'Super Sports' could imply stripped-down trackday buckets but the RS 3's diamond-patterned, two-tone soft leather seats are a world away from thin-skinned GRP shells — they're wide-shouldered, wonderfully accommodating and hold you just so while providing genuine comfort.

They also have three-stage heating, extendable under-knee support and powered lumbar adjustment (both in and out and up and down). All of which contributes to an A1 driving position and fine all-round visibility, including to the rear through the auto-dimming rearview mirror and the powerfolding heated door mirrors.

The seriously flat-bottomed all-black RS-badged steering wheel is a tactile delight with suede work areas around its meaty rim, while the paddle-shifters on its horizontal spokes are perfectly sited for triggering an addictive 361bhp adrenaline rush.

It's comprehensively multi-function too, with buttons for remotely controlling just about everything.

Plus there's a wealth of tasteful detailing: the intricate stitching on the upholstery; the boost gauge in the rev-counter; the modish eyeball air vents with lovely knurled ally outer rims that twist to regulate the airflow and whose nifty inner nozzles are pulled or pushed to switch between a direct or diffused air flow pattern; the easily-selected all-weather lights that prevent you being dazzled by your own on wet roads; and the carbon-fibre trim inlays that although not currently available on UK-spec cars nonetheless look great.

The console alongside the driver's left thigh houses the S tronic selector lever, the electric parking brake and the straightforward MMI rotary controller for the multimedia system. In addition to just turning the dial to input information, a touchpad built into the top of the MMI rotary knob lets you enter letters, numbers and symbols; even more conveniently, you can operate many MMI functions by voice.

The pin-sharp MMI screen retracts out of sight into the fascia when not required but when on show provides excellent mapping with on-screen road speed signs; spoken directions are timely, and graphic navigation cues are mirrored on the smaller driver's screen separating the black-faced speedometer and rev-counter.

Other driver-friendly touches include instant infotainment menu jumping using the buttons on the wheel, quick 'tabs' for direct finger-tapped access to all the main infotainment menus, CD plus SD and SIM slots in the lit and lined glovebox, four one-shot tinted windows (with privacy glass to the rear), drive-off automatic door locking and, in addition to a full set of airbags, one just for the driver's knees.

Wearing its family-friendly hat the RS 3 Sportback welcomes rear cabin passengers with comfy outer seats that match those up front — with the same fancy-tooled leather and dished backrests. The shapely outer armrests will also be appreciated by those travelling in the back as too will the air-conditioning vents, magazine pockets and decent foot room.

A fist of headroom helps keep it airy despite the all-black dķcor. The high transmission tunnel does mean that anyone using the middle seat will need to have a foot in both camps. For those carrying smaller back seat occupants the driver-controlled remote rear door child locks will add peace of mind.

With the back seats in use there's 280 litres for luggage but ditch the people and drop the 60:40-split seatbacks and that increases to a handy 1,120 litres. The tailgate opens high and a knee-height load sill makes for back-friendly loading. Another well-considered touch: the outer rear belts stay well out of the way when folding or raising the rear seats.

Thanks to a new intercooler and revised turbo, the RS 3's petrol-swigging 2.5-litre five-cylinder powerplant has gained useful power and torque boosts, making this RS 3 the quickest yet. Not that it will really matter to owners, but it's also EU6-compliant and emissions are down.

Tag-teamed with a potent 361bhp is 342lb ft of torque that peaks from 1,625rpm. The result, more than ever in S tronic Sport or Drive Select Dynamic modes, is stunningly strong 'grunt' from low down the rev-band. And, spurred on by a gloriously hard-edged yowl from the exhaust, it surges tsunami-like right through the midrange Neither is the five-pot shy in meeting up with the red-line — so if needs be your overtaking can be as brutally quick as it is seamless.

Dedicated and accomplished drivers will also appreciate that in manual mode the now-faster shifting seven-speed S tronic dual-clutch automatic gearbox doesn't automatically change up, letting them hold a gear when, say, lining up to spear through a corner. It also adapts the timing of the shifts to your driving style: drive hard and the changes will be far sportier; drive moderately and you'll trigger the most economical shift pattern.

All this mechanical power and glory is enough to catapult the RS 3 off the line in 4.3 seconds and all the way on to its ex-factory, electronically-limited 155mph — however, as mentioned earlier, your Audi dealer can, and will, de-restrict it for you, after which near enough ten-tenths of the 180mph marked on the speedometer could be seen. Some family hatchback!

Underpinned by the VW Group's aluminium-and-steel hybrid MQB platform with revised suspension, riding 25mm closer to the ground than the standard model and with wider front and rear tracks, this RS-fettled version goes exactly where you point it. The nose is quick to respond and corners are taken level, helped by the unflappable grip and the 255/30-profile Pirelli rubber. The brakes, boosted by eight-piston callipers and Audi's 'wave' profile discs at the front, are strong and decisive.

While it handles with 'locked-down' 4x4 quattro grip there's still a delightful feeling of it being light on its feet. Fortunately its unshakeable body control doesn't mean keen drivers need wear a gum-shieldģ when fitted with the optional magnetic ride system and Drive Select set to Comfort, even rolling on 19-inch wheels the RS 3 rides with unexpectedly adept compliance.

Your other Drive Select choices are Auto, Dynamic and Individual, which lets you tailor the engine sound (really!), the engine and gearbox settings, suspension control, and steering weighting all to suit.

A hugely impressive performer, the RS 3 is a hoot to drive. Not just along an engaging stretch of empty blacktop but even at the sort of speeds that are the order of the day most of the time on today's clogged and congested roads.

When you're prepared to write a cheque for around Ż40K for a superfast five-door family hatchback you won't be worrying about running costs. But when you do know, you won't be whinging, but smirking.

Officially the RS 3 Sportback returns 34.9mpg in the Combined Cycle with 189g/km emissions. When they collected our RS 3 at the end of a week's entertaining driving, its on-board computer was registering a real-world average consumption of 32.7mpg!

As family-friendly as any regular A3 Sportback, this plush but wickedly fast RS version can feel incredibly tame loping along at near three figures but it has all-weather limits that you're unlikely to ever close with — at least on public roads. Feelgood rating? Ten out of ten! — MotorBar