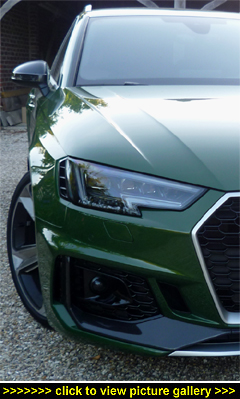 “Let’s not beat about the bush:
when it comes to describing Audi’s
RS 4 Avant only one word will do —
Awesome!”

IF YOU THINK that's a term more readily associated with supercars then you probably have never driven a RS 4. For a start it's exceptionally quick — it rockets from zero to 62mph in just 4.1 seconds and can hit 174mph; its quattro all-wheel drive system blesses it with limpet-like grip; and the oh-so-tractable turboed V6 under its bonnet punches out 443bhp and a heroic 442lb ft of torque.

Menacingly hunkered down, blistered wheelarches stretched tightly over meaty lo-pro 275 tyres, flaring air-intake 'nostrils' topped by RS Matrix LED headlights bracketing a deep, elongated hexagonal honeycombed grille at the front and a fastback glasshouse with fist-sized oval tailpipes at each rear corner, it's mean, lean and, in the case of our test car, very green.

Green not as in save-the-planet green but painted in a stunning eye-catching metallic Sonoma green. As to matters 'green', the RS 4's official Combined Cycle economy is 32.1mpg. Amazingly, given it awesome bite, our week's test average came out at an impressive 29.8mpg although some extended bursts of hardcore driving forced that down to the mid-twenties. Not that the average RS 4 owner will lose and sleep over that.

Amazingly, this latest fourth-generation super-estate is not just any old all-seasons supercar but comes with room for five as well as a 505-litre boot. The spacious cabin is a work of art woven with an urbane blend of leather, Alcantara and acres of high-gloss carbon-fibre that gives you a spirit-lifting buzz every time you settle inside. Audi RS cabins are rich in perceived quality, something that now even their best top-end rivals can't quite match.

It's hard to decide what grabs your attention the most as you swing back the wide-opening door — the RS-branded 'Super Sport' front seats upholstered in fine black Nappa leather with honeycomb-pattern quilted design centre panels enhanced by contrasting red detail stitching look superb, and are even more holding and comfortable than they look — and they look pretty damn good!

The seats also come with three-stage heating and extendable front cushions for personalised under-thigh/knee support. The driver additionally gets power-adjustable pneumatic backrest bolstering for that bespoke fit along with a massage function and a two-setting seat/mirror position recall. Next comes the ³ber-sporty flat-bottomed steering wheel, its grippy rim wrapped in perforated soft hide. Paddle-shifters and comprehensive multifunction controls can, of course, be taken for granted.

Impossible to overlook too is the brilliant multi-configurable 12.3-inch 'virtual cockpit' instrument panel ahead of the driver, seamlessly integrated with Audi's intuitive MMI navigation and infotainment system with its own stand-alone central 8.3-inch touchscreen. The system is feature rich and not only can it be accessed using your fingertip but incorporated with the hardwired MMI control cluster on the central tunnel close to your left thigh is a touchpad enabling you to enter your destination by 'writing' commands with your finger — or if that's all too much for you, using voice commands.

The infotainment system includes DVD playback, Jukebox with 10GB hard drive memory for music, online live traffic information, DAB radio radio reception, Bluetooth, Audi Smartphone Interface, etc. But the best part is that it all works without a hitch while letting the driver order up a customised mix of entertainment, navigation, vehicle and trip computer information, all displayed precisely as they want it between the two screens.

Switchgear is equally foolproof, with important controls not sited on the wheel self-evidently close by — even if it's your first outing in the cabin it's easy to find the right button. Added to that there's a first-class head-up display covering road speed, speed limit and other core information. Exactly how it should be in something this fast.

Ensuring you keep your cool at all times is a highly effective three-zone climate control system with slim air vents set along the full width of the dash. Perfect. Out of the polluted cityscape you might power down your widow for a breath of clean air — and the satisfaction of hearing the invigorating yet politically-subdued snarl from the RS Sport exhaust system whenever you surge through the 'box.

Most things on your wish-list will already be fitted as standard to the Carbon Edition (it would take a full page just to list them so we haven't) but that doesn't mean there aren't more goodies to be had — our test car came with a few of the more popular including an absolutely first-rate head-up display, Driver Assistance Pack (Adaptive Cruise Control with Stop&Go and Traffic-jam Assist, Pre-sense Front that extends the collision warning and automatic braking function of Pre-sense City to cover the entire speed range up to 155mph, Predictive Efficiency Assistant, Camera-based traffic sign recognition, Collision Avoidance Assistant, Turn Assist to detect approaching vehicles and apply braking to help avoid a collision when turning at junctions, and Active Lane Assist).

Other must-tick items include electrically-adjustable front seats with memory function for the driver, a Comfort and Sound Pack (Bang & Olufsen 3D Sound System, Advanced key with electric handsfree boot opening, and rear-view camera), powerfolding door mirrors with auto-dimming and memory function, and Audi Phone Box with wireless charging. Together they bumped the Ż70K price-tag up to Ż76K but that's arguably still a justifiable amount of money for one of these awesome Vorsprung durch Technik machines.

Between the RS 4's luggage-friendly boot and generous front cabin there's more than enough room to comfortably accommodate two, or even three, adults without cramping their social space. And thanks to deceptively generous glazing, visibility is not just excellent for the driver but for all of his or her passengers, wherever they choose to sit.

You do, of course, get Audi's competent Ride Select that enable you to alter the throttle response, gearshift characteristics and steering feel between three pre-set modes: Auto, Comfort and Dynamic. A separate Individual setting allows you to adjust the vehicle's characteristics to your own preferences. Refreshingly, even in its compliant Comfort mode the RS 4 remains resolutely responsive.

Doing its very best to stop you putting a wheel wrong is Audi's renowned quattro drivetrain. Ably enhanced by a Sport differential plus Electronic Stabilisation Control with torque vectoring, the RS 4 boasts the degree of wieldiness that will leave just about any rival trailing in its dust. The fact that it performs with such panache on even rubbish blacktop is hard to grasp until you've been in the car when it performs. Until then, take our word on it.

Other key components contributing to its tenacious traction and grin-inducing agility include the fluently direct steering and the awesomely reassuring brakes (ventilated and perforated front and rear discs) that, even with a light pressure from your right foot, haul the RS 4 down from three-figure speeds with total confidence and poise.

For those who like to know these things, a tad more power is sent to the rear axle than the front during normal driving. However, whenever necessary, as much as 70% can be distributed through the rear diff. At the other extreme, as much as 85% of torque can be deployed at the front axle. While you really can sense the RS 4's traction permeating its body, any such switching is done with such finesse that you really wouldn't — and don't ever need to — notice. You'll be too busy spearing unerringly through the trickiest of corners with your only thought as it grips and turns and grips even harder being 'bring on the next one'.

Motivating the RS 4's pizzazz is the exuberantly refined way its lightweight 2.9-litre V6 belts out the power — its potent direct injection biturbo set-up delivers 443bhp and 442lb ft between 1,900 and 5,000rpm. If you're already a fan of the RS 4 you won't need reminding that the previous version's bigger V8 could only stump up 317lb ft. In real-life the V6 (also found in the RS 5) has 24-carat 'point-and-squirtability' enabling it to rocket off the line and pass 62mph in a smidgen over 4 seconds. Even in its 'restricted' default state it hit triple figures in around 10 seconds and run on to 155mph (ask your Audi dealer nicely and, for £1,450, he'll unlock its full 174mph potential for you).

While it has pace aplenty, it's also tremendously civilised in everyday driving. And that's down to the slick-changing, silky-smooth eight-speed torque converter it's partnered with. With optimised gearbox ratios, quick-shift paddles on the wheel and a sport programme, it's the power behind the throne.

No matter how angelic or devilish your right foot, power is fed to the blacktop smoothly via Audi's permanent four-wheel-drive quattro system. Motorways are cruised effortlessly; the V6's muted growl virtually unheard while a glance at the driver's computer will confirm that fuel is being consumed at the rate of 36+mpg. All of which, on long-haul trips, means close to 500 miles between pit stops.

With this much poke on tap it's easy to overlook 'what lies behind' — in the RS 4 Avant's case that would be a 505-litre boot. The tailgate is powered and can be quickly opened or closed by the key fob, cockpit or tailgate button — or by swiping your foot under the rear bumper. Whichever method you use, the boot is both a sensible shape and easy to load.

If you're not carrying — rear passengers, that is — you can drop the versatile 40:20:40-split back seats to open up a 1,510-litre loadbay. You might consider the RS 4 a tad too tasty to be seen towing anything but if you do have the need then it will haul a braked 2,100kg.