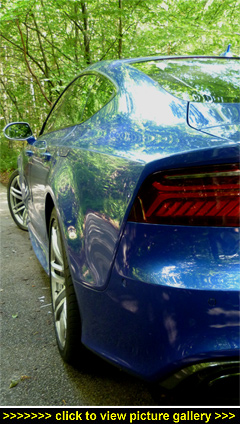 “Do cars sing? Well, not exactly;
but if they did the RS 7 would
sing ‘Dontcha wish your car was hot
like me...’ Actually, no lyrics are
necessary because its song is a
fabulous, spine-tingling growl you
hear when pressing on...”

AND THERE IS PLENTY OF POTENTIAL for 'pressing on' thanks to its fabulous 560hp twin-turboed V8 and limited 189mph top speed. Acceleration is vivid — Audi's most potent five-door coupé catapults off the line, passing the 62mph marker in a blistering 3.9 seconds.

In its homeland the initials 'RS' stand for 'racing sport' (RennSport) and confirm the RS 7's Fast and Furious pace: just plant your right foot for contemptuously easy rocket-ship acceleration all the way to the redline in every gear.

Checking the box for the optional 'Dynamic Plus' package pushes the max up to a still limited but autobahn-shrinking 189mph. Should you not have an abiding need for speed you can always settle for the 155mph standard version. Whatever top speed your RS 7 is restricted to, torque, you'll be pleased to know, remains a steadfastly awesome 516lb ft — and, more impressively, every last lb ft of it is on tap between 1,750 and 5,500rpm.

This new-look RS 7's four-litre twin-turbo V8 is a mighty powerplant and yet it still manages to comply with the strict new EU6 emissions regulations. In fact, despite the searing performance, fuel consumption has improved to a combined cycle 29.7mpg while CO2 emissions have gone down — not a lot, but it is measurably cleaner than previous versions.

Given the power outputs and formidable performance it's hard not to blink when you look at the 38.7mpg official extra urban ('touring') figure. But then the RS 7 has a very nifty trick in its technical arsenal — it's called Cylinder on Demand technology and it turns the V8, temporarily, into a V4 by selectively shutting down four of the eight cylinders when the RS 7 is being driven gently.

Not that you're ever physically aware of this happening — only the on-board computer's mpg readout gives the game away: in our case, a recorded overall test average of 26.1mpg but with an incredibly good best of 36.1mpg on a long, free-flowing motorway run.

To look at, the RS 7 is long and hunkered down in an understated yet at the same time subtly intimidating way. LED technology headlights bracket the single-frame honeycomb grille finished in gloss black that fronts the long bonnet. 'Clean' flanks flow back over forged lightweight 20-inch alloy wheels wearing 275/35 rubber before blending into a sharply sloping tail.

An adjustable rear spoiler is integrated into the tailgate; lower down a carbon-fibre diffuser with a flattened black oval tailpipe at each corner hints at the power and performance. As do the massive black callipers with vented and drilled discs fitted at the rear; those at the front are even more massive and RS 7 branded. 'Pulsing wave'-effect dynamic indicators front and back add to the moving theatre. If this were the Wild West, this particular Audi would be dressed all in black…

Cars this fast that let more than one other person ride along with the driver are few and far between. However, not only does the RS 7 cosset its passengers in luxurious surroundings but it will accommodate four; adults each and every one.

Those travelling in the front enjoy a generous amount of real estate with plenty of leg and headroom — and superb, über-supportive RS sports seats that adjust electrically every which way for a truly bespoke fit.

And we do mean 'every which way'; for instance, the backrest bolstering can be powered tightly in or eased out; under-knee support can be extended to suit, again at the press of a button; and likewise the lumbar support. When you're anatomically correctly seated, you have yet more seat comfort choices: 3-stage heating or 3-stage cooling.

The RS 7 pilot is particularly well pampered: for a start he, or she, enjoys an automatic easy-entry facility and, to set the tone, a fabulous matt black, reflection-free, flat-bottomed, very grippy perforated leather-wrapped steering wheel. With gearshift paddles. It's also seriously multifunction. The 'stop' and 'go' pedals are large and businesslike; non-slip, alloy, and flanked by the perfect left-foot rest.

The instrument pack is brilliant: the large rev-counter and speedometer are separated by a crisp TFT display that shows a full spectrum of driver information as well as, during the dark hours, the ghostly imagery from the night vision system.

Day and night, a head-up display projects critical data directly into the driver's sight-line including SatNav directional graphic cues and road speed. Indispensable when driving a car this quick because your eyes need to be looking outside the cockpit at the road ahead.

Helpfully, the current posted speed limits are displayed as road signs, just as you'd see them at the side of the road. Full navigation mapping (and the full array of Audi's oh-so-easy-to-use Multi Media Interface) infotainment features is taken care of by the main screen that rises up out of the fascia when the 'Start Engine' button is thumbed.

Cabin décor is dramatically all black but lightened by tasteful highlights: 'pin-striped' satin aluminium trim to the centre tunnel, fascia, and door inserts; and fine filleting to the switchgear. All of it great to look at and great to touch.

Despite the rousing soundtrack when the V8's on the prod, cruising on long journeys can seem library-quiet — unless you choose to crank up the 14-speaker Bose sound system. Upping the comfort and convenience factor are keyless locking/unlocking for all four automatic self-closing side doors, a tailgate that's fully powered (opening and closing), one-shot up/down windows, powerfold door mirrors (on demand and automatically when locking and leaving), electric parking brake with auto hold function, and 'ice cream' climate control (dial up cold and it feels chilly enough to keep ice cream from melting).

While you can operate many MMI functions conveniently by voice, MMI Touch also lets your finger do the talking — letters, numbers and symbols can be easily entered on the touchpad, which can also be used, for example, to move the map by dragging across the pad. You also have Audi Connect to access, among other things, weather, travel information, city events, parking information, and flight information; Google Earth maps and street views are just a button-press away.

Close to hand, a palm-friendly, perforated leather, RS gearknob tops the selector lever that controls the eight-speed tiptronic transmission. Power is directed to the four wheels via Audi's rear-biased quattro permanent all-wheel drive system and used to best effect by the standard-fit torque vectoring Sports Differential which apportions torque in precisely measured quantities between the rear wheels according to driving conditions.

RS adaptive air suspension, together with adaptive damping, is controlled via the Audi Drive Select driving dynamics system. The Electronic Stabilisation Control (ESC) features a Sport mode that, if required, can be deactivated altogether. As an alternative Audi offers the tauter RS Sport Suspension Plus with Dynamic Ride Control. A further option is dynamic steering, which continuously varies the steering ratio for greater agility. Other handling upgrades include carbonfibre-ceramic brakes.

On a 'need to know' basis you can ignore all of the above; all you really need to know is that this RS 7 is very fast and very composed — it stops superbly; goes around sharp corners as if on rails. On the public roads you're unlikely to close in on its handling limits.

The Drive Select system makes the RS 7 not only a car for all seasons but for all driving moods — choices are Comfort, Auto, Dynamic and Individual, which allows the driver to tweak a raft of fundamental settings including those for the engine, transmission, suspension, steering and even the sports exhaust.

Time flows pleasingly in the unexpectedly cosseting Comfort mode but switch to the Dynamic setting and ready yourself to take an adrenaline hit — accompanied by a racier note from the exhaust the V8 feels palpably more eager, literally champing at the bit; the helm becomes weightier, and the ride hardens as the suspension firms up ready to rock and roll (but with absolutely no sign of any rock and roll from the body).

Let the RS 7 off the leash and it spears through corners; you can even adjust your line halfway though without any repercussions — point the RS 7's nose and, thanks to its immense traction and grip, that's exactly where it will go. In fact, it's no exaggeration to say that you can make full use of the RS 7's power without any worries.

And consistent throughout all of this is the quality and smoothness of the tiptronic's shifts, whether you're chilling in Normal mode, purposefully pressing-on in Sport mode or taking command using the 'paddles' in Manual where you can make full use of the revs without any concerns about it shifting up until your fingertips let it.

For the record, two rear seatbelts and two rear headrests restrict the RS 7 Sportback to four adults. But you won't hear any complaints from those seated in the back. Those under six-foot will have space above their heads; generous foot room, a large, long central armrest (with pop-out cupholders), dedicated AirCon controls and a relaxing seatback angle improve physical comfort further, as do the three-stage heated, silky-to-the-touch leather seats.

For a five-door coupe bodyshape the RS 7 can pack in a lorra luggage: 535 litres of it. Need more? Ditch two passengers, fold the 60:40-split rear seats and you'll have 1,390 litres with a flat loadbay floor. There's also a load-through hatch for skis and the like. As mentioned, the rear hatch can be opened and closed again (and quickly) without dirtying your hands using the electronic key.

At this level the RS 7's Ł85K price tag won't raise any eyebrows — many of its less practical (and not always so quick!) competitors cost double that. Factor in its all-weather usability and breathtaking pace (not forgetting the glorious soundtrack), along with its ability to comfortably transport four plus luggage across multiple borders in the shortest possible time and you have a genuine supercar bargain. — MotorBar