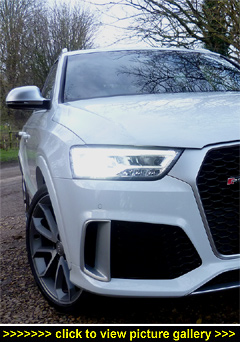 “RS. Now there’s an evocative pair
of letters and, as lovers of high-
performance cars will tell you, you’ll
find them only on the very fastest
Audis. And the prestige German
carmaker has just released another
RS from its cage...”

THIS TIME IT'S THEIR Q3 SUV that's benefited from the RS treatment, making it the fastest compact SUV you can buy. Priced at around Ł10,000 more than the range-topping S line Q3, the RS costs Ł45,810. Even so, at that price they'll fly out of the showrooms. All right, so they'll drive out — but with 335bhp under the bonnet they'll still be quick through the door: 0-62mph takes just 4.8 seconds.

Primarily, what you're paying for is the performance and speed-wise you certainly get a lot more more 'bangs for your bucks' — electronically governed to 155mph, the RS Q3 makes excellent use of the sonorous 2.5-litre five-cylinder petrol-drinking powerplant that's already earnt its stripes in the TT RS. An exhaust system with a switchable flap ramps up the soundtrack — it's rousingly thrummy when used hard.

Wrapping up the desirable performance and luxury package that's the RS Q3 is a Q3 bodyshell, its almost coupe-esque lines still fresh from its mild 2015 model-year facelift which saw it acquire a new 3D-effect single-frame grille flanked by slim, almost wrap-around revised headlights and, totally arresting to see in action, dynamic 'scrolling' rear indicators which illuminate sequentially within two-tenths of a second from the inside out in the direction the driver intends to turn.

Some of that additional Ł10K covers the extra specification of the RS versions — RS owners don't go short on much at all. The cabin seats up to five adults and has everything you'd expect to find in a top-flight Audi starting with extremely comfortable and supportive Sports seats upholstered in fine black Nappa leather with black suede centre panels enlivened by RS Q3 branding on the backrests.

Naturally they're heated (three-stage) and feature four-way power-adjustable lumbar support and extendable thigh support. A fist of headroom and very effective but pinch-free bolstering and two-zone climate control add to the liveability, as does the amount of elbow room between the front seats.

Fine visibility out in all directions is another big plus and both contributes to and enhances the RS Q3's wieldy feel from behind the wheel — you can see down the bonnet too, which makes placing it accurately on the road a cinch.

The dash and centre stack are ergonomically first-rate plus there's plenty of high-gloss piano black complemented by plenty of cool satin chrome and the infotainment screen power-retracts neatly into the fascia when not needed. The navigation itself is foolproof with straightforward full postcode destination entry, crisp 3D mapping and clearly marked street names. You'll rarely be asked to 'make a U-turn' in an RS Q3 because the spoken directions always arrive in good time and keep you unfailingly on course.

Other appreciated features include the ease with which menus can be 'jumped' through, the set-and-forget automatic electromechanical parking brake, the large digital road speed readout and road speed limit and 'no-overtaking' signs shown in the driver's information display between the rev-counter and speedo, both nicely enlivened by bespoke grey faces and red needles.

Our test car was fitted with the optional Technology Package that upgrades to hard disc-based MMI Navigation Plus with a seven-inch screen. Passengers can use the integrated WiFi hotspot to surf or email; the driver, if not making the most of the 10- speaker hi-fi system, can stream web radio music, view online traffic, weather, parking and travel information, and utilize navigation aids Google Earth and Google Street View.

The flat-bottomed multi-function steering wheel is wrapped in perforated leather and comes with wheel-mounted aluminium paddle-shifters along with comprehensive multi-function buttons and controls including those for a driver-set 'favourite' function, voice, media, menu selection, etc.

And for those who like to score everything they do, the Driver's Information System features a lap timer (as well as oil temperature and boost pressure displays). The two large pedals sport an alloy-look while Main Beam Assist automatically switches between main and dipped beams as appropriate. All-Weather LED lights stop you being dazzled by your own lights when, for instance, driving on wet roads.

Most RS Q3 buyers will likely be A-listers — the 'A' standing not so much for their celebrity status but for their Affluence. Money goes to money, they say, and RS Q3 owners will be pleased to know that when they come to sell three years' down the line there will be a useful exit bonus — the RS Q3 enjoys excellent residual values, retaining 52% over three years/60,000 miles (that's around a quarter better than similar rivals).

To be fair that probably won't matter a jot to most RS Q3 owners. What will float their boat will be not just the 4.8-second 0-62mph time but how it rides, jives and drives.

The 335bhp 2.5-litre direct injection petrol in-line five with turbocharger and intercooler kicks out a muscular 331lb ft of torque from just 1,500rpm. Courtesy of a slick-changing seven-speed S tronic dual-clutch autobox, this torque unerringly finds it way to the four wheels via Audi's renowned quattro all-wheel drive system which sends the exact amount of drive torque to the wheels that need it most to ensure maximum driving grip whatever the conditions.

It's been said before but it bears repeating: in a very fast car you need one thing above all else — awesome brakes. The RS Q3 has them: weight-saving wave design, high-performance drilled ventilated brake discs (gripped by eight-piston calipers at the front) serve up immense and utterly drama-free stopping whenever your right foot calls it.

A close second comes dynamic integrity. For this the RS Q3 gets sports suspension (lowered by 25mm) and Audi's Drive Select which offers the driver the choice of three drive settings. Comfort proved best at injecting some pleasing pliancy into the understandably firm ride and, refreshingly, it didn't compromise the handling. In Dynamic you've still got a machine that's refined but that's more-ishly driveable.

And last but certainly not least, you need sharp steering. Thanks to Drive Select the driver can also adjust the accelerator response, gear-change speeds, exhaust noise control and, importantly, the steering weighting to suit his or her personal preferences. The result? The RS Q3's steering sings from the same music sheet as the rest of the RS-fettled running gear.

The seven-speed S tronic is also perfectly in tune with the RS's dynamic orchestra, managing the power and torque with aplomb; dishing it out masterfully so that one minute it's flowing as smoothly as warm honey, then when you select Sport or stamp the accelerator — and almost regardless of what gear you're in or what the revs are — you find yourself closing with the horizon at breakneck speed.

So how does it handle? Ardently. While an SUV from the outside, the RS Q3 doesn't exhibit typical SUV traits — fast corners are taken flat like a sports car; and it can be slung around in the manner of the hottest hatch.

Yet the ride is far more compliant and composed than you might have imagined and it lopes along relaxingly on motorways making three-figure autobahn speeds seem normal — obviously it firms up noticeably if you stick it in Dynamic mode but then that's exactly what you'll want if pressing-on is your game. And it's getting from A to B with the least drama in the shortest possible time despite the weather where the quattro all-wheel drive-equipped RS Q3 truly struts its stuff.

Naturally, on-road all-weather performance is first-rate when ice, sleet and snow set the terms for who moves and who doesn't — RS Q3 drivers fall unequivocally into the former group.

Those not asked to ride shotgun next to the driver won't be too put out to travel in the rear cabin. Getting in and out is easy. Although a compact SUV there's decent knee room and a fist of headroom for a near-six-footer seated behind another. And, providing your driver isn't on a mission, the wide centre armrest (with pop-out cupholders) and relaxing backrest angle is conducive to some serious lounging.

The tailage is powered so hands are kept clean when opening and closing the 'lid' to the regular-shaped 420-litre boot (covered by a reversible mat). Drop the rear seatbacks and the resulting cargo bay holds 1,325 litres.

Not surprisingly, with 20-inch alloys wearing 255/35 Pirellis there's not room under the boot floor for a matching spare so a 'tyre mobility' kit is included. Additional storage is provided by the usefully deep tray found under the lift-up boot floor. And should you ever want to tow something, the RS Q3 will make light work of hauling a braked 1,900kg.

For transporting longer items there's a practical load-through hatch while for serious lugging duties the rear seats fold down virtually flat; commendably the belts stay well out of the way whether the seatbacks are being raised or lowered. Three headrests and three three-point belts mean that you won't be breaking any laws by carrying three adults in the back.

Officially the RS Q3 returns 32.8mpg in the Combined Cycle; over 400+ miles of real-life testing we averaged 28.5mpg. Considering our keen pace on the many less-travelled B-roads we drove over, that's not at all bad. Driven more like an 'ordinary' Q3 — yes, MotorBar can do restrained too — we recorded 31.6mpg.

The RS Q3 not only looks 'the biz' — it is the biz. Its 'magic' is the polished way it blends sporting high-performance with easy-to-live-with versatility and it's ability to transform, in the blink of an eye, from an urbane and versatile town-friendly SUV into a sizzling road-burner that will humble most sports cars. — MotorBar