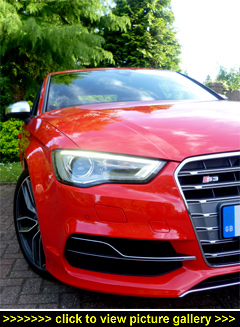 “While Ł23K will be enough to buy
you a perfectly nice A3 saloon, you’ll
need to find half as much again to
turn that ‘A’ into an ‘S’ with an über-
quick-shifting S tronic (twin-clutch)
transmission, über-eager 295bhp
engine and über-grippy quattro all-
wheel drive...”

UNDER THE S3'S BONNET is a lightweight turboed and direct injected 1,984cc inline-four with four valves per cylinder and double overhead cams that punches out a whopping 295bhp backed by a significant 280lb ft of torque.

You can go for a manual six-speed stick-shift if that's your thing, but the S tronic twin-clutch transmission will get you off the line faster — passing the 62mph post in a smidgen under five seconds (4.9 to be precise) and on to a restricted 155mph top speed. For the record, the six-speed manual is four tenths of a second slower to 62mph, taking a still-quick 5.3 seconds.

Away from the open road you really don't need to call up many revs for an instant hit of power, such is the engine's admirable flexibility. So, 'potter' it will quite amiably; it will also 'harry' most other fast cars before surging past with serene ease. In fact most traffic most anywhere is dispensed with just a press of your right foot and seamless, quickfire gear shifts.

Not so very long ago this level of performance would have meant a 20mpg penalty — today a car like this will, officially, manage 40.9mpg in the Combined Cycle. Okay, so its 159g/km of CO2 adds Ł180 per year road tax to the running costs, but who's going to quibble with that. Our week-long test saw a 35.9mpg real-world overall average — impressive; and commendably close to the official Combined Cycle figure (for the record, the official number for urban driving is 32.1 and for the extra-urban cycle, 47.9mpg).

Seasoned go-faster-istas will love the S3 not just for being an amazingly fast car but for being one that cloaks its abilities under a rather innocuous body. Okay, the chrome-tipped quartet of oval tailpipes poking out from the grey rear diffuser, stand-out 19-inch five-arm metallic anthracite alloys wrapped in 235/35 lo-pro Dunlop rubber and satin chrome mirror housings are something of a give-away.

As too, on our test car, was the glistening Misano Red pearl effect paintwork (worth every penny of the Ł525 extra charge). That 'jewellery' aside, an S3 saloon liveried in a less dramatic colour could pass for the company car that is the lot for many of its less awesome A3 siblings.

Physically, the S3, fronted by a purposeful single-frame grille and with pronounced side sills underscoring its 25mm lower-riding, wider-tracked stance, epitomises the sporting saloon without straying over the border into OTT territory.

Inside the key word is categorically 'classy'. The S3 may be a full-on sports saloon but it's also fitted out luxuriously — in a flawless manner that will appeal to passengers as much as its lucky driver.

Everyone aboard will appreciate the Nappa leather upholstery and the exceptionally comfortable seats (the front pair are fab-looking red-and-black Sports items) as well as the efficient dual-zone climate control, DAB digital radio and the first-rate Bang & Olufsen HiFi (if you like your sounds then you'll agree that, for the extra Ł750, it's a snip).

The driver is faced by white-on-dark-grey S3-branded sports instrumentation (including a boost gauge inset into the rev-counter) and a beautifully grippy flat-bottomed multifunction sports steering wheel with ally-look shift paddles mounted behind the horizontal spokes; aluminium also features on the non-slip pedal set.

The centre front armrest slides and adjusts for height and can be fully used thanks to an electro-mechanical parking brake; there's also a switchable automatic Hold Assist for tricky incline pull-aways.

Additional well considered touches include: the four beautifully crafted and very tactile knurled eyeball-style air vents gracing the minimalist fascia; the perfect left-foot rest; and the slim infotainment screen which can be powered down out of sight when not needed — but when it's 'up' the display is crystal clear. A 6-CD autochanger and a pair of SD card slots live in the glovebox. And along with all the usual trip information, the driver's display can also show a digital speed readout.

Other must-have kit includes items like three-stage heated front seats with power lumbar adjustment, Audi's brilliantly easy to use Multi-Media Interface, an iPod connection, Bluetooth, one-shot up/down power windows, heated and electrically-adjustable door mirrors, driver-operated power child locks on the rear doors (peace of mind for those who need to carry small children), and tinted glass — all of it standard-fit.

While you have to pay extra for the SatNav (it's an SD card-based system), it does come as part of a Ł1,450 'Driver Assistance' package that also includes adaptive cruise control, active lane assist, main beam assist, Audi's parking system (helps you park by steering the S3 into a selected parking slot either parallel or perpendicular to the roadside), front and rear parking sensors, auto lights, rain-sensing wipers, and an acoustic windscreen with a sun-strip. Sounds like a pretty good deal for the money.

Driven with a modicum of restraint, the S3's cabin is a haven of refinement. However, drivers with a liking for a soundtrack that's the motorsport equivalent of Bat Out Of Hell only have to engage the S tronic's Sport mode and set Drive Select to its Dynamic setting. Do that, stampede the 295 horses and the resulting deep mechanical growl and throaty rasp from the tailpipes will be sweet music to your ears.

For front occupants there's a fist of headroom, excellent shoulder room and plenty of leg room. Those seated in the rear aren't hard done by either, with good views out to the sides and of the road ahead from between the front seatbacks. They also get their own air vents, netted mag pockets, and usable door bins. And their seats are also covered in the same red-and-black leather as adorns the front. In short, you won't hear any complaints from passengers travelling in the rear.

When it comes to practicality the S3 meets its obligations: the 390-litre boot is long and wide and is more than adequate for four people's luggage. If you need to do some lugging then folding down the 60:40-split rear seatbacks opens up an 845-litre loadbay. Below the floor is a space saver spare wheel with room for oddments in four trays. Naturally there's a large luggage net and sturdy bag holders.

Given quattro permanent all-wheel drive (with an electronic differential lock), you just know you're not going to be short on grip. And you're not because the grip is always distributed to where it will do the most good traction-wise.

And that's just the beginning of its talents because the S3 saloon is also fitted with Audi's magnetic ride suspension and Driver Select that lets the driver call up the most appropriate skills-set via five drive style settings, with the Individual mode (driver-favoured accelerator response, steering weighting, and S tronic shift points) offering the most customisation.

Between them the five modes cover the whole spectrum of driving styles (Auto, Comfort, Dynamic, Efficiency, and the driver-tailored mix 'n' match that's Individual) and, of course, the option at any point of taking full control via the paddle-shifters either only whenever it's appropriate, or if you're feeling wired, for the entire journey.

The ride is fine for such a hard-charger: in Comfort that's exactly what you get; in Dynamic the ride is as sporting as you need to exploit the stunning 'grunt' and ardent acceleration while maintaining maximum traction.

The steering keeps up with the handling, which is poised even when you've pinned the loud pedal to the floor, so no worries of the back-end coming round to bite you just when you're having a good time. Brakes are powerful vented discs front and rear, with black-painted S3-branded callipers. Dynamically, the S3 is serious automotive fun; and a serious rival for those also considering potent sporting saloons from other top-badged German marques, BMW and Mercedes-Benz.

The S3's über-punchy powerplant and über-grippy chassis combine to create a characterful, top-notch compact sports saloon that's searingly fast everywhere and in all weathers. Honestly, what more could you want? — MotorBar