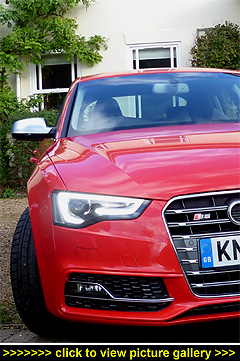 “Launched from Ingolstadt rather
than Cape Canaveral, Audi’s
supercharged S5 rocket-ship has
a maximum terminal velocity of
155mph and fires off the line to hit
62mph in 5.1 seconds...”

ITS COUPE-ESQUE LOOKS neatly incorporate five doors and four seats. For many that won't matter much because they'll only be interested in occupying one of them — the driver's.

You can't really blame them, not with 328bhp and 324lb ft of torque waiting to be unleashed by their right foot. And with quattro permanent four-wheel drive putting all that power unerringly on the blacktop via a seven-speed S tronic dual-clutch 'two-pedal' gearbox, things can only get better.

What really makes this fast (0-62mph in 5.1 seconds) Sportback feel so alive is what lies beneath: the supercharged and direct-injected V6's torque is the pay-off here, delivering an uninterrupted 324lb ft shove in the back all the way from 2,900 through to 5,300rpm.

On the road it feels so spontaneously pokey that you'd swear it's all on tap from the second you pull away; and it's the same in all seven gears. Inside the luxurious cabin, despite the four big tailpipes poking out under the Sportback's tail, the V6 is agreeably quiet — until the rev-counter's white needle closes on the redline, when a lovely turbine-like howl kicks in that almost makes you want to howl along with it…

The seven-speed S tronic deserves to share some of the glory here for the speed at which it changes and the seamless manner it whips up and down the ratios. In Sport mode it's even more impressive. Use the paddle-shifters on the steering wheel and getting from A to B can be delightfully entertaining. Who needs to go to the moon?

Actually, you can almost overlook the 5.1-second 0-62mph figure because this engine's real forte is the stealthy operation of its supercharger that, at any point in the rev-band, just keeps pushing out the power without let-up until you hit the limiter — with this much punch, safe but brutally-quick overtaking is a given.

Talking of which, the official economy figures for the S5 are: 26.4 (urban); 42.8 (extra-urban); and 34.9mpg (combined). After a full week's driving, we averaged 24.4mpg. For those miles spent cruising the motorways, 34mpg was the figure most regularly seen.

And yes, it so looks the part. Identifying marks for the cognoscenti are the aluminium-look door mirror housings and 'V6T' badging on the front wings, four meaty chromed oval tailpipes (a pair on each side), painted 'S5' brake callipers, LED front and rear lights, 'S' body kit and 'S' grille — mean enough to encourage cars ahead on the motorway to peel out of your lane without any need of a polite flash.

Optional equipment includes a Sport Differential, intended to make driving more agile and more satisfying — and not only when you're closing on the S5's limits. It does this by enabling the quattro system to not only transfer torque between the front and rear axles to counter traction losses, but also between the rear wheels. In layman's-speak, during cornering it diverts more torque to the road wheel with grip in order to, literally, push the car through.

The Sport diff has been designed to work in tandem with Audi Drive Select, enabling you to change the characteristics of the engine, transmission, steering, shock absorbers, and the active sport differential to suit your mood and the demands of the road.

Essentially, Drive Select lets you select from five driving modes, each offering a different take on the S5's driving style; and all at the touch of a button — depending on the driving conditions or simply your mood of the moment, you can select from Comfort, Dynamic, Auto, Individual and Efficient.

And the different driving characters are clearly noticeable: for long trips, Comfort serves up a more relaxing ride. Dynamic definitely calls up a very sporty driving experience, sharpening in particular throttle and steering responses. Auto adapts to the current driving situation, while Individual lets you configure the S5's dynamics to your own preferences.

The Efficiency mode shifts up gears earlier and down later in conjunction with more energy efficient operation of ancillaries — the one to use if 'mpg' is more important to you than 'mph'.

Drive Select and Sports Diff or not (our test car had neither), compared to the standard suspension on the A5 the S5 version rides lower and the shock absorbers are modified to limit body movement when pulling away, braking and cornering. So even if you don't specify all the toys, the result — as confirmed by our 'S' fettled Sportback — is assured roadholding, precise steering and an altogether sportier driving experience.

The proof comes — in spades! — when you start throwing the Sportback around. Despite a kerb weight of over one-and-three-quarter tonnes, point its deep-grilled nose into a corner and break out the 328 horses and the S5 doesn't hesitate — it simply hunkers down and spears forward. To be honest, you don't have to do much to maintain very fast progress because your line will be meticulously maintained by the grippy permanent all-wheel drive. What's just a tad uncanny is that the S5 can actually feel like a rear-wheel driver.

The electromechanical power steering is well-weighted and dynamically direct, and it contributes strongly to the Sportback's responsiveness. The brakes, too, come up trumps; but then, with so much power to rein-in, you wouldn't expect anything less from the enhanced 'S' braking system.

Plenty of tasteful matt-brushed aluminium inlays and trim complement the classy tear-shaped satin chrome housings encasing the distinctive 'S' white-on-grey dials. A driver's information screen between the speedo and rev-counter provides all the data you need, while Audi's MMI infotainment driver interface is still the most intuitive of all such systems. The fine leather-rimmed, three-spoke 'S' Sports multifunction steering wheel (with shift-paddles on the cross-bars) is a delight to hold and to use.

Although the SatNav is optional it's worth every penny and provides crystal clear mapping alongside well-timed, accurate and easy to understand directions backed up by a countdown graphic on the driver's display between the dials that clearly shows the distance to the next manoeuvre. Something that's really helpful in heavy traffic.

'In-flight' storage is also good: in addition to a big glovebox and capacious door pockets that can house a large bottle, there's also a decent bin beneath the centre front armrest (which slides as well as adjusts for height) and useful lockers built into the bases of both front seats.

Those travelling in the back of the S5 Sportback will have little to complain about; only, perhaps, that the front is an even more exciting place to be. Access to and from the pair of well-shaped rear seats (virtually clones of the excellent front sport seats, even down to the three-stage heating) is easy.

Once buckled-up, average height rear passengers have decent knee room and a fist of head room (unless they contrarily insist on sitting rigidly upright). There's plenty of foot room although not an excess of leg room but near-six-footers will be comfortable behind similarly-sized adults seated ahead of them.

A big armrest (and we mean big!) with pop-out cupholders delineates each rear passenger's territory in a civilised manner. Adding to the status quo is a dedicated set of climate controls for the 'third' zone. There's also a full-size ski-hatch — not just for show either because this all-wheel drive super-hatch will easily get you and your party up snow-covered Alpine roads.

It may only seat four but there's enough boot for a five-seater: an enormous 480 litres. If you need to move larger loads then fold the back seats and you'll have a level loadbay with a total capacity of 1,283 litres; and all easily accessible through the large tailgate. Sleek and sexy it is, but it's also more practical than its two-door sister, the A5.

The S5 Sportback is competent over all roads in all weathers, goes like a wild thing, and looks AbFab. Yet it's also a versatile, all-purpose, family mega-hatch that's beautifully made and supremely easy to live with. If you've got the cash, enjoy! — MotorBar