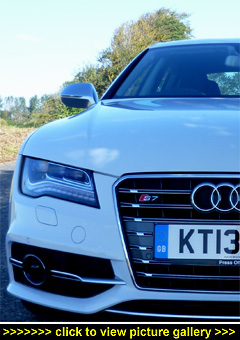 “Little wonder Audi sales are
rocketing. Just look at the selection
of desirable cars they offer. And if
you have a need for speed, then
you’re seriously spoilt for choice —
how about a sleek S7 Sportback to
get the adrenaline surging?”

Even the official combined cycle fuel consumption gets a '4' — regrettably it's at the back rather than at the front: 29.4mpg. Still, for the performance (top speed is 155mph but take off the electronic limiter and Audi engineers reckon the S7 gets closer to 190mph), that's still an impressive figure.

While we're talking economy, a week in the enthusiastic hands of MotorBar's test team saw a real-life average of 22.4mpg. No prizes for guessing why... Not that real-life customers will be crying into their Hendrick's because, like Epicurus, they're philosophical enough to know that everything has a price, including (and especially) pleasure.

You might actually be wondering how a stonkingly potent, petrol-swigging, twin-turboed V8 manages to achieve even 22.4mpg. State-of-the-art engineering is how — Audi calls it Cylinder Management.

This innovative system works on the cylinder-on-demand principle and deactivates four of the engine's eight cylinders when you're cruising in higher gears at constant speed or at low revs; the instant you need more power it switches back to firing on all eight in an instant. And it's this dual-charge ability that improves the effectiveness of the V8, optimising efficiency and economy and helping to lower both fuel consumption and CO2 emissions.

We'd defy anyone to pinpoint the moment the switching between 4-cylinder and 8-cylinder operation takes place — unless they're watching for the telltale graphic that pops up in the instrument panel advising you that you're running on four. Another bit of technical magic, which helps mask the number of cylinders firing, is called Active Noise Cancellation.

This box of tricks (technically it works like noise-cancelling headphones) compensates for any intrusive noise from individual engine speed-dependent frequencies. Via four concealed microphones in the S7's headlining, cabin noise is recorded and then analysed by computer. If any intrusive sounds are detected, it broadcasts an anti-noise signal via the audio system which effectively cancels out the intrusive noise frequency. Amazing. Just don't expect it to work on a nagging spouse…

In an age rich with driving pleasure naysayers, a Lamborghini is a red rag to a bull; an S7, thanks to its deceptively sleek looks, can slip by undetected. But look close and there are clues as to its near-supercar abilities: the mean-looking pair of oval tailpipes each side (not just for show; they emit a clearly audible growl), subtle 'V8 T' badging on the front wings, and 'S7' branded front brake callipers visible through the spokes of the 19-inch alloys wrapped in seriously meaty low-pro Pirellis.

The five-door 'fastback' bodyshell is equally deceptive — your eye tells you it's not as big as its inner space proves it is; a tape measure confirms it's far bigger — at five metres nose to tail — than you think. Swing open a front door and drop into one of the superb leather sports seats — the stitched, diamond-pattern quilted centre panels are as good to sit on as they look. Headrests are built-in, there's full power adjustment of the seat, extending under-knee support, power lumbar, and three-stage heating.

The footrest for your left foot is not just a token perch like so many others but a wide, comfortably angled ramp that helps make cruise control progress physically stress free. The same thoughtfulness has made sure the big brake pedal is in line with your right leg for maximum pressure with minimum physical effort (not to mention physiological comfort); and that the short selector lever's knob fits your palm beautifully.

And the height-adjustable centre armrest doesn't foul the handbrake — actually, the parking brake is an electromechanical one with a fingertip-activated on/off switch as well as an auto function that does it for you every time you stop.

The cabin is unadulterated Audi; in other words, about as good as car interiors get — and there's absolutely no doubt that Audi are the acknowledged meisters when it comes to creating a magnificent cabin ambience.

A large infotainment screen sits atop the middle fascia, perfectly in view, where it can be seen with minimal driver distraction of what's going on ahead (if you're not using it, just press the appropriate button and it conjures itself back into the dash). All switchgear is sited exactly where you'd logically expect to find it; all works faultlessly. As, too, does Audi's insultingly easy-to-use Multi-Media Interface — used to operate numerous functions of the car.

The leather-wrapped, three-spoke red-and-silver badged S7 multifunction wheel, with aluminium paddle-shifts behind the horizontal spokes, feels just right in your hands. You sit low in the cockpit, close to the ground; a palpable hint of race-car. The red-ringed Start-Stop button reinforces the feeling. You also have a fist of air between the crown of your head and the roof; in fact there's plenty of room in all directions.

Five doors it might have but the S7 Sportback is strictly a four-seater. Those travelling in the rear seats enjoy the same comfy, individual, sportily-sculpted seats as those seated ahead of them — only they sit higher, so good views out of the airy cabin are a given. They also share a very wide padded armrest (with storage and cup-holders) that also serves to keep rear passengers firmly in place when the driver is pressing on.

And to guarantee that all aboard keep their cool, the S7 comes with four-zone automatic air-conditioning; rear passengers get their own AirCon controls with vents in the B-pillars. And a Bose hi-fi (admittedly an extra-cost option, but then if you can afford the S7 in the first place…) to entertain them even if the driver's skills don't.

The back seats — armchairs would be more accurate — of an S7 Sportback are a luxurious and relaxing place to be as the miles glide by. And — even riding on 19-inch wheels — glide by they do, thanks to Audi's Drive Select. This lets the driver change the S7's handling dynamics: Comfort, Efficiency, Dynamic, Auto and Individual.

Comfort adjusts the set-up to create a more relaxing ride — in fact, it provides a smooth ride that betters that of many a self-styled 'luxury' car. Dynamic sharpens up the feelsome electromechanical steering and throttle response to deliver what is best described as an über-sporty driving experience — if you're up for it — at a fearsomely quick pace over even the most tricksy of B-roads. Auto adapts the system depending on the current driving situation while Individual does what it says and allows you to configure the dynamics of the car to your own personal preferences.

Open the high-lifting fifth door (use the electronic key and it power opens for you) and you'll find yourself looking into a huge boot that accommodates 535 litres. Folding down the 60:40 split rear seatbacks creates a flat-floored loadbay that will swallow 1,390 litres of 'stuff'. For accommodating longer loads while still using the rear seats, there's a very large load-through panel. Finished? Then press the button in the tailgate and it power closes and locks — no dirty hands!

For the record, a bag of golf clubs can be tossed in without a second thought, as shown in this clip of Audi's tongue-in-cheek S7 ad (it first aired on Audi of America's YouTube channel) which sees Mercedes-driving Leonard Nimoy challenge his time-warped doppelgänger Zachary Quinto and his Audi S7 (Quinto plays a younger Spock in Star Trek and Star Trek Into Darkness).


The 4.0-litre powerplant under the S7's bonnet is a twin-turboed V8. And you only fit one of these if you intend to go fast and furious. With 414bhp and a consistent and unfaltering 405lb ft of torque all the way from 1,400 to 5,300rpm, four-corner adaptive air suspension and four-wheel drive to keep those Pirelli P Zeros in unwavering contact with the road, getting power down is laughably easy.

Stamp the loud pedal, and keep it down (the dual-clutch S tronic transmission's shifts are quick and fluent), and you'll see 62mph blur past in 4.7 seconds. Keep on going and you may even have time to see the lightweight aluminium tailgate's stability-aiding spoiler rise as the S7 powers relentlessly on to its electronically-governed 155mph top speed.

And however hard you're pushing the easy-to-control S7 (unless you're being really stupid), its limits are higher than you're ever likely to need. Progress, slow or fast, in rain or sunshine, in town or on the open road, is always amazingly undemanding. Just so you know: the quattro system generally apportions drive with a rear wheel-biased 60% but, depending on available traction, this can be any mix between 20:80 and 70:30 front-to-rear.

Few other five-door cars can match the understated presence of the S7; few are so versatile; and few are as effortlessly quick — and, crucially, can be so in all weathers. Factor in the wondrously cosseting cabin and you'll have absolutely no problem convincing yourself that never was Ł63K so well spent. — MotorBar