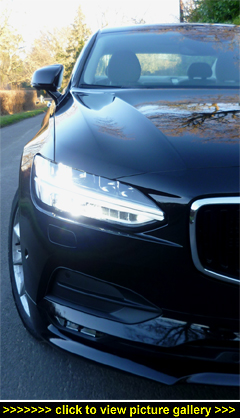 “To paraphrase Ol’ Blue Eyes,
‘Drive me to the moon...’ is how
the handsome S90 saloon makes
you feel. And such is its ability,
don’t be surprised to find yourself
playing among the stars — those
stars being the Audi A6, BMW 5
Series and Mercedes E-Class
saloons...”

BECAUSE, UNLIKE BRANDO in On The Waterfront, there's no 'coulda had class…coulda been a contender…' about it — the S90 has the class and is a contender. It's buoyed-up by all the right premium attributes, of which none is more striking than its luxurious and beautifully-upholstered cabin that offers top-end with a twist — a very Swedish twist.

It's also amazingly comfortable and a treat to travel in. True, some might consider the three-pointed star of a Mercedes-Benz has a stronger gravitational pull, but there's no denying this grand new Volvo saloon is a persuasive alternative to anything 'made in Germany'.

The S90 line-up is clear cut, although more powertrains will be coming along shortly including the T8 Twin Engine petrol/electric plug-in hybrid already under the bonnet of the S90's big SUV sister, the XC90.

Currently you can flip a coin and, depending on what you called, go for either a 187bhp D4 turbodiesel with front-wheel drive or a 231bhp D5 with all-wheel drive. Both are four-cylinder turbodiesel units from Volvo's highly-rated Drive-E range and every version comes with a slick-shifting eight-speed automatic 'box with manual mode. On-the-road prices start at Ł32,955 and top out at Ł42,455.

Externally these S90 saloons are almost as imposing as the XC90. Encountered coming towards you — or seen in your rearview mirror — they look dauntingly wide. And at over over two metres wing-to-wing, they are. But added to that is the slatted black grille, visually 'stretched' by slim wraparound headlamps, and the hewn-from-rock appearance created by a bonnet and front wing tops that are higher off the ground than those of many other saloons.

During our week with the S90, while keeping to 'our' side of the road, we noticed that even usually bullish pickups and Range Rovers — usually the ones with the 'my road' attitude — quickly gave way and flashed us through. So yes, street cred also comes 'standard fit' with the S90.

Inside the classily-styled and strongly protective bodyshell (today more than ever Volvo is a byword for the safest cars you can buy) is another world. For a start, when it comes to leather upholstery most carmakers still only offer Model T choices: You can have black, or you can have... black.

And, sure, you can have black in your Volvo although we think the blond Nappa leather gracing our S90 is the one to go for. Luxuriously soft, stretched over the shapely seats it's a core ingredient of the premium Scandinavian interior design.

Measuring a smidgen under five metres from nose to tail, the S90 has plenty of room for passengers; and its clean and uncluttered cabin architecture is intended to maximise every inch.

Centre stage of the sweeping fascia is a portrait-format, nine-inch tablet-like touchscreen. Volvo's design 'marshals' have cleaned up the 'Dodge' that was the average button- and switch-encrusted car cockpit — the touchscreen (with crystal-clear and pin-sharp text and graphics) now controls almost all of the major functions.

Of course you still need to physically move the selector lever from Park to Drive or when manually overriding the autoshifts, but that's no hardship; and, oh yes, you need to twist the Start Engine knob (easier than the usual keyless button-thumbing).

The handbrake is electronic with an auto hold function that means there's nothing to do even in stop-start traffic. And should you at any time feel like changing the driving mode (Comfort, Eco, Dynamic) there's a stylish thumbwheel in the long, wide tunnel console. Incidentally, you can even customise any of the three drive modes to your own preferences via the touchscreen.

Large glass areas along with upscale but deliciously understated light-toned Swedish elegance create a haven from the stresses of the outside world. Of course, the Bowers and Wilkins sound system helps some!

Keeping the cabin uncluttered is no problem either; you'll find plenty of useful places to stash your stuff, from lined cubbies and accommodating door pockets to the storage bin beneath the central armrest and the good-sized, damped glovebox.

From behind the wheel life couldn't be much better; the beautifully-finished wheel is very tactile with a two-tone rim and mostly blond to match the rest of the décor; and as multifunction as your fingertips might desire.

The front seats (3-stage heated, naturally) are up to Volvo's usual standard — in other word's, some of the very best around. As you'd expect, they're power-operated and offer a huge amount of adjustment. Once you've set your ideal position store it to memory and you'll be comfortable every mile of your trip, no matter how lengthy. Combined with the pampering look and feel of the cabin, they make going anywhere a seriously relaxing experience.

This is a Volvo, so all the safety equipment you could wish for is available. Standard-fit items include City Safety — this provides pedestrian, cyclist as well as large animal detection (a world first) plus a front collision warning with fully automatic emergency braking, including at junctions.

This new ability to recognise large animals such as sheep and deer is potentially a lifesaver — RSPCA research shows that around 75,000 deer are involved in vehicle collisions each year, with 10,000 killed instantly. And it's not just deer that are dying: every year around twenty people are killed in these types of accidents.

Ideally you want to avoid any sort of collision, but swerving to avoid one, especially at speed, can be equally dangerous. But should you need to then you'll be glad of the S90's Run-Off Road Protection — if it senses the car is about to leave the road it will brake and try to steer you back onto it; if that's not possible it will automatically tighten the front seatbelts and should the worst then happen there are plenty of airbags as well as front seat frames with collapsible sections designed to help prevent spinal injuries.

Incidentally, should you ever hit a deer call the police who can organise professional veterinary assistance.

More cutting-edge safety features include Pilot Assist and Adaptive Cruise Control — this semi-autonomous drive technology takes care of the steering (up to 80mph), and accelerator and brake inputs required to keep the car within lane markings and at the desired cruising speed. Don't forget, either, that the D5 comes as standard with an all-wheel drive system that maximises grip to give you ultimate control in slippery conditions.

Other reassuringly useful tech stuff includes systems that alert the emergency services in the event of a serious crash. But the system doesn't just keep an eye on your welfare — its Connected Service Booking automatically alerts your garage if something needs attention or a service is upcoming and enables the car to pre-book itself for a convenient service appointment at your chosen Volvo dealership.

Connectivity is today's in-cabin buzzword and the S90 comes well equipped to manage it for you via the intuitive infotainment touchscreen — in fact, you can do quite a lot just using your voice and give your fingertips a rest. On hand is Android Auto to sync with your smartphone and its apps (Apple CarPlay with two USB ports and an Aux input costs an extra Ł300) while foolproof navigation comes courtesy of Volvo's Sensus Connect system that also allows you to access a range of web apps and browse the Internet.

Not quite so much life-saving as licence-saving are the graphic warnings alerting you to speed cameras with countdowns starting at 400 yards, so time to safely react if you've accidentally strayed over the limit.

Directly ahead of the driver is an active TFT crystal driver's information display with a choice of themes and digitised speedometer and rev-counter, large digital road speed readout (with roadside speed limit signs helpfully displayed immediately below), and the navigation map between the dials. And it works brilliantly — combined with the multifunction steering wheel and comprehensive voice control of the infotainment system, your hands barely need to leave the wheel nor your eyes the road.

It just gets even better in the rear cabin: doors open to almost ninety degrees so entry and exit is as easy as can be. Those travelling in the limo-like back cabin enjoy exceptionally good room and all the space necessary for some seriously lazy lounging.

The seats are shapely and well cushioned with relaxing backrest angles and the wide drop-down central armrest has pop-out twin cupholders. Add in decent headroom, air vents in the B-pillars and elbow-friendly outer armrests and you can be sure of arriving fresh every time out.

Five hundred litres of luggage is what the S90's boot will hold — more than enough for most owners. A power-operated bootlid keeps your hands clean (you can use the smart key or the button on the fascia for both opening and closing) while the 60:40-split rear seats fold down virtually flat for accommodating bulkier items (or IKEA flatpacks!) when they're not required for passengers. Plus there's always the option of towing what you can't, or would rather not, fit inside — up to a braked 2,200kg.

The D5's PowerPulse turbodiesel uses compressed air induction to boost the turbo at low revs and boost off-the-mark acceleration while keeping a lid on emissions. It certainly feels frisky, serving up sharp throttle response and the ability to go for that gap even when you're running in Comfort.

Use Dynamic instead and despite its weight and size the S90 can really get a move on — in fact it feels almost a different car; much more hard-charging. And even when you're taking it easy, the D5 always feels agreeably eager — but let's not forget that under the sculptured bonnet there's 231bhp backed-up by a hefty 354lb ft of torque which will take it to 145mph and accelerate the S90 to 62mph in a crisp 7 seconds.

And Yes, you can hear the turbodiesel working… if you plant your right foot heavily. But driven normally, and when eating up the motorway miles, the D5 fades unobtrusively into the background.

With drive going to all four wheels and that much power our 40.7mpg average recorded over a week of pretty hard driving on a wide range of roads is respectable and would be easy to live with long term. Drive like us (not!) and you could edge pleasantly closer to the 58.9mpg that's the official combined cycle figure.

Generally, big cars handle in one of two ways — either they're just too cumbersome to punt about or they do the job but to do it they ride far too hard. The S90 manages to tread the line between both extremes and while it rides fluently it also feels composed when you pitch in into a bend.

The steering is quick enough and along with plentiful grip from the all-wheel drive ensures reactions are always predictable; placing it on the road and holding your chosen line is easy, and it was reassuring to find that the S90 gamely resists attempts to give up its handling decorum. Hefty vented discs at the front help deliver excellent braking; it's as unruffled shedding speed as it is escalating it. All of which makes it a smoothly assured and easy-to-live-with driving machine.

In all-wheel drive spec with the 231bhp D5 powerplant the S90 proves to be all it's cracked up to be — a spacious and very comfortable mile-eating cruiser but one with the capability to indulge its driver with some entertainment on the back roads, all the while offering high levels of safety. If the names Audi, BMW, or Mercedes appear on your shortlist, you now need to add another: Volvo. ~ MotorBar