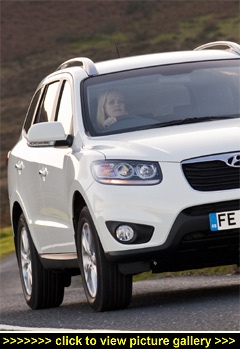 “Named after the famous Santa Fe
Railway, Hyundai’s new mid-sized
4x4 is available with a 2.2-litre diesel
engine, all-wheel drive and with five
or seven seats — and priced from
just Ł21,495...”

WITH A HIGHER BRAND PROFILE, a significantly improved powertrain and sharper styling, the new Santa Fe should now be on the right track to benefit from the worst Winter for three decades — with 4x4s once again high up on the agenda for many new car buyers, it could be the right vehicle at the right time.

Specification, size, build quality, reliability, comfort and attractive pricing have all previously been sound reasons to buy a Santa Fe. And in this respect nothing has changed.

Good news is the new versions are a few hundred pounds cheaper, and with more power and more equipment, than the models they replace. These 'mores' add up to around Ł2,000 better value for money. Prices range from Ł21,495 to Ł25,495. All models have a new 2.2-litre turbodiesel engine with six-speed manual or automatic transmission options and there are five- and seven-seat versions of both the Style and Premium trim levels on offer. Although retail customers make up the majority of Hyundai's current customers, business user-choosers are now looking at the brand because of the lower tax implications, five-year warranty and value for money.

The latest Santa Fe's styling changes are concentrated on the finer details, and its strong silhouette is instantly recognisable. At the front, the black two-bar grille is replaced by a chrome-edged three-bar version that brings more distinction and flows into the strong creases running down the bonnet. Revised headlight clusters sit above a new, more sculpted bumper which also houses new fog lights in a black surround. The rear gains a new bumper that curves neatly into more distinctive light clusters, while trapezoidal exhaust pipes and new alloy wheel designs improve the car's stance and presence on the road.

In the cabin, carbon black trim replaces the previous wood finishes to highlight the Santa Fe's modern feel, and the standard CD/RDS radio now comes with an AUX/USB connection with full iPod control for increased functionality.

The new Santa Fe retains its MPV-rivalling practicality, with the more versatile seven-seat option available for a modest Ł750 on both Style and Premium models. In either version it offers a huge 969 litres of load space in the five-seat configuration rising to a van-like 2,247 litres with all the rear seats folded. This is an increase of 34 litres over the previous model.

Seven-seat versions are also fitted with a self-levelling rear suspension and rear privacy glass as standard, while five-seat versions get a substantial under-floor storage area that is ideal for keeping wet or dirty items away from the main boot area. The really big plus point for seven-seat models is that the middle and rear rows fold easily into the floor to provide a large flat load base.

It really doesn't matter whether you need seven seats or not: leave the rear row folded and you still have huge carrying space and that is important for our modern-day active lifestyles. This feature would be my main reason to buy this vehicle — it is just so practical and user-friendly. But if you want to use it as a towing vehicle — and many people buy an SUV for just that very purpose, be it caravan, boat or horse trailer — the maximum braked towing weight has been increased by 300kg to 2,500kg.

Another reason to buy the new Santa Fe is its new 2.2-litre direct injection, balancer shaft diesel engine. This Euro V-compliant, all-aluminium 2,199cc powerplant offers up 194bhp backed by 311lb ft of torque (322lb ft when specified with an automatic gearbox). This amounts to improvements of 26% and 27% respectively over the previous engine. Peak torque arrives at just 1,800rpm so the unit is responsive and the power progressive and it works well with the slick new six-speed auto gearbox — a nice combination. Top speed is 118mph and 0-62mph takes 10.2 seconds

Performance doesn't come at the expense of economy as the combined cycle figure for manual transmission models now breaks the 40mpg barrier and emissions have fallen significantly to 176g/km, moving it down the Vehicle Excise Duty ratings to Band I which currently costs Ł175 (from April 2010 it will be Ł300 for its first year of registration before dropping to Ł200 a year).

However, choosing an automatic transmission model means higher VED charges: the official combined cycle fuel economy is 38.2mpg — exactly what my test model returned — but with emissions of 194-197g/km this means a Group J VED band of Ł215 a year (increasing from April 2010 under the new first year rules to Ł425 before returning to Ł235). For business users, Benefit-in-Kind tax levels range from 26 to 30% depending on the version chosen. To offset the running costs, service interval times have been doubled to 20,000 miles and the five-year unlimited mileage warranty helps offset tax implications.

The previous Santa Fe always offered a comfortable ride, if perhaps a bit too soft so the handling was on the sloppy side. The new model's suspension has been revised and tuned for UK roads and is certainly firmer (but not so much as to be annoying) and the handling is now sharper, more controlled and relatively precise. And the suspension still makes light work of absorbing the shocks and jolts from the ever-increasing number of potholes.

The Santa Fe has a 4-star EuroNCAP rating for both adult and child occupants. The vehicle is also now fitted with a rollover sensor which detects any possible inversion and automatically deploys side airbags and the seat belt pre-tensioners. All versions are fitted with twin front, side and full length curtain airbags while active head restraints are now standard.

Alongside the on-demand four-wheel drive system fitted across the range, all models now come with ESP in addition to traction control and ABS with electronic brakeforce distribution. In normal conditions the 'torque on demand' system runs in two-wheel drive mode unless sensors detect a loss of grip. Drive is then automatically split between the front and rear axles to maximise traction. The system can be locked into four-wheel drive mode by the simple push of a button but there is no low ratio setting so it's sensible off-roading rather than workhorse traction.

Gripes: foot operated parking brake, indicator/wiper stalks on the wrong sides of the column for UK use, some interior trim is a bit plasticky although it looks okay, not all that cheap to run and residual values need to be improved.

Plus points: very roomy, versatile interior space, good looks, well priced, fine new diesel engine and auto transmission, drives well and the five-year warranty. As a package, the new Santa Fe offers a great deal — and that could be the unofficial 'mission statement' from Hyundai: 'whatever the model, it's a great deal'. — David Miles