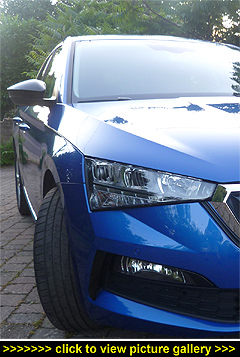 “Just when you thought that Skoda
couldn’t possibly come up with
yet another appealing new model,
up pops the Czech carmaker’s
all-new, lifestyle-focused five-door
hatchback...”

AND SOME ARE SAYING that it's among the best of its kind. Priced competitively from Ł16K to Ł23K, the Scala fits comfortably between Skoda's Fabia supermini and the bigger Octavia models. We've just spent a week driving the line-up's expected best-seller, the petrol-drinking 113bhp (115PS) 1.0-litre in SE trim that could be on your drive for Ł18,585.

Engine choices are predominantly petrol-fuelled, starting with a three-pot 1.0-litre TSI unit that offers two levels of power: 93 and 113bhp. Moving up there's a four-cylinder 1.5-litre TSI that puts out 148bhp. Skoda is sensible to include one turbodiesel in the Scala line-up — a fuel-sipping (combined cycle 53.3 to 57.7mpg) 113bhp four-cylinder 1.6 TDI. Seven-speed DSG autoboxes are available to partner all the Scala powerplants except the entry-level 93bhp TSI, which comes only with a five-speed manual 'box. DIY gear-changers will be well satisfied with the alternative to the auto — a slick six-speed stick-shift.

Potential Scala customers may already have their eye on a new Astra, Focus or Golf but any of these family hatchbacks will cost them more than this new Czech charmer. And even if money is not a burning issue, the Scala offers the most room for passengers and their luggage.

Its class-leading inner space is down to it riding on the very latest platform from the VW Group which endows it with an accommodatingly long wheelbase (2.7-metres) within an overall length of 4.4-metres. Both front and rear passengers gain, with those in the back enjoying the same generous knee room as they'd get in the brand's larger, saloon-shaped Octavia model. Heads, too, benefit — the Scala providing the best rear headroom in its class.

The cabin is refreshingly uncluttered and pleasingly functional with decent fit and finish all topped off by the sympathetic use of interesting-looking materials and smart detailing such as the dimpled metallic decorative strip fronting the dash and door panels. Both the shapely fabric-upholstered front seats (prettified by classy diamond-stitching) are height adjustable and welcomingly supportive, with effective bolstering to keep you in place without being restrictive when it comes to getting out. There's also manually-adjustable lumbar and the long seat bases provide good under-knee support; headroom is especially generous at a fist-and-a-half and there's plenty of shoulder and leg room too, all of which makes them comfortable on extended road trips.

The driving position is likewise spot-on with fine visibility in all directions so placing the Scala accurately on the road is easy-peasy. The matt-black, leather-wrapped multifunction steering wheel feels good in your palms. Seen through its upper arc are a pair of clear white-on-black dials flanking a multifunction driver's computer that includes that all-important digital speed readout; and you can jump and scroll infotainment menus via the wheel-mounted controls. More good news: the Scala's horn is satisfyingly strident — a two-tone 'big' car's note.

In keeping with many other brands, the SE is on-trend when it comes to navigation — it lets you piggyback onto your smartphone's apps, mapping and navigation. However if, like us, you'd rather your SatNav be built-in, you can always tick the appropriate options box for Skoda's Amundsen set-up that comes not only with a bigger 9.2-inch touchscreen but also a bedazzling Audi-style Virtual Cockpit. That noted, the SE model's standard eight-incher is intuitive to use, and quick and responsive. Another plus — the free-standing screen is sited high on the fascia so is a minimally distracting glance away when you're on the move.

Aside from the Comms equipment there's plenty of kit included even on the SE (only the second trim above 'S' but below the 'SE L' and the just-added, highly-specced and sportier 'Monte Carlo'): very efficient AirCon with a pollen filter, cruise control and speed limiter, front and rear electric windows (all one-shot-op), tinted glass, auto-dimming rearview mirror, electrically-adjustable heated door mirrors, rear parking sensors, and a set of 16-inch alloys.

In-cabin storage is also fit-for-purpose with 26 litres of it provided by a deep storage box beneath the padded and slide-adjustable front centre armrest, a neat and lined mini-glovebox in the dash to the right of the steering wheel, a drop-down glasses storage case in the headlining, a good-sized cooled glovebox, dual-use triple cupholders alongside the trad-style pull-up handbrake, usefully long bottle-holding door bins, a deep rubber-lined tray ahead of the gear lever and handy, lidded storage compartments built-in under both front seats. Oh, yes, and some 'simply clever' Skoda touches — a compact umbrella that slots neatly into a dedicated holster in the driver's door plus some nifty pockets on the top inner sides of both front seatbacks.

Plenty of cars come with 'five doors and five seats' but the term is only as meaningful as the physical packaging allows — in the Scala's case its seat-count is an honest one that offers room for three side-by-side in the back. In and out is easy through wide opening doors (that shut with a well-engineered 'thunk') and said passengers will travel comfortably thanks to decent legroom, loads of footroom and almost a fist of headroom even though they sit noticeably higher than those up front. Consequently views forward and out to the side are excellent.

Making it all more civilised are dedicated central air-vents, a pair of charging USB ports, two front seatback pouches, door pockets game for bottles, and big outer armrests. When it's youngsters being carried, driver's will be glad of the Isofix fastenings on the outer rear seats (and, for the record, the front passenger's too).

The standard alloy wheel size for SE models is 16 inches but our test car rolled on optional 17-inchers wrapped in more sporty 205/50 profile Bridgestone tyres; even so, it rode exceedingly well, cushioning jolts from potholes and rough roads without any drama and in a Golf-like manner that makes the Scala feel very comfortable on the move wherever you're sitting.

These days triple-cylinder engines are becoming the norm as drivers realise their downsized benefits. The 113bhp 999cc three-pot (and predicted Number One engine choice) nestling in the Scala's engine bay is everything good we've come to expect of them — power delivery is strong from the off, and its eagerness is carried through well into the middle of the rev-band; plus its 147lb ft of 'grunt' syncs well with the manual box's six ratios. Top speed is 125mph and the more relevant zero-to-62mph acceleration takes a crisp 9.8 seconds although it does feel a mite quicker.

Keeping the three-pot in its sweet spot is a doddle courtesy of the manual gearbox's slick gearchange action (aided by a nicely-weighted clutch pedal) which in turn makes stop-start driving in heavy traffic and pootling around town decidedly unstressful. And with a top speed well in excess of the 'ton', cruising motorways at the legal limit is a fairly serene affair even with just three cylinders.

A gallon of unleaded also goes quite a way in a 1.0-litre Scala — using the latest and more meaningful WLTP tests, the official Combined Cycle consumption is given as 44.8 to 49.6mpg. In the real world, a hard-pressed week saw us record a pound-stretching 47.6mpg. Which means most drivers should crack 50mpg. And so far as 'greenness' goes, CO2 emissions are a reasonably climate-friendly 113g/km.

Buyers are more likely than not to be seeing the Scala though 'family' eyes, so will want 'safe and predictable'. And this is exactly what they'll get. The steering is pleasantly light but not so light that the driver goes short of feedback; in fact the helm is precise and, combined with ample grip, ensures the Scala sticks to your chosen line through fast-flowing bends and stays focused when pressing on along twisty B-roads.

In town, drivers will be glad of the tight turning circle and when it comes to parking 'manoeuvrable' is the Scala's middle name. The brakes too are praiseworthy, with a progressive action that scrubs off speed reassuringly from big numbers to small. Overall it's enjoyable to drive and Yes, you can have some fun should you wish.

Step around to the Scala's lifestyle estate-style rump and pop the tailgate; it opens high and you'll find yourself staring into one of the largest boots in the segment — 467 litres of regular-shaped luggage space with the back seats occupied. For the record, that's appreciably bigger than what you'll find in a Golf. Drop the flat-folding 60:40-split rear seatbacks and it just gets better (and bigger) with the boot extending to create a 1,410-litre loadbay — not bad at all given that the Scala is a proper hatchback not an out-and-out estate car.

The rear load cover is of the parcel shelf variety and totally hassle-free to use. Sturdy pop-out bag hooks are provided along the boot's sides along with a number of versatile stretchy luggage nets and bags (including a netted 'hammock' under the parcel shelf which proved unexpectedly useful!). You'll find a space-saver spare beneath the boot floor. And if you're planning on a spot of towing the 113bhp three-pot will cope with a braked 1,200kg — in which case you might like to add the optional powered towbar that's deployed at the press of a switch in the boot.

This new Scala from Skoda has only been on sale a very short time but already it's being talked about — and liked — a lot. Appealing not only to established Skoda fans, it's competent enough to snatch sales from rival brands. Real-world motorists will appreciate its easy driveability, roomy and well-finished cabin and — even when driven hard — its 50mpg economy. Five doors, five seats and a lot of family car for your wampum! ~ MotorBar