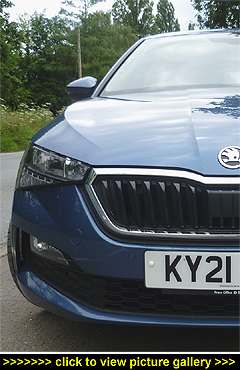 “Okay. We get it. Not everybody
wants to drive a Crossover or SUV.
Or even a saloon or estate. But if
you’ve got a family, where does that
leave you? Knocking on Skoda’s
door — its Scala provides an honest-
to-goodness five-door in a sharp-
suited hatchback bodystyle that can
satisfy all your motoring needs...”

A STYLE ALL OF ITS OWN would be a fair description of its looks but many buyers will be eyeing it up for another reason: economy. A week's hard driving in the real world saw us record a smile-inducing 48.4mpg — indicating that driven with a tad less gusto, the happy side of 50mpg should be what most owners get.

And that wallet-friendly figure doesn't come at the expense of progress. Top speed is 123mph with 0-62mph taking a crisp 10.3 seconds — not bad at all from a 999cc, petrol-drinking, three-pot engine that musters a feisty 108bhp. And while its one-litre capacity might on paper appear small, it nonetheless puts out more than enough zip whenever you pull away or overtake courtesy of its 147lb ft of torque.

For a three-cylinder unit it's not too vocal even when accelerating hard, and the seven-speed dual-clutch autobox helps ensure there's always sufficient focus and pace to overtake with confidence; slot it in Sport mode and it really gets up and goes. The autobox also has a useful manual mode for whenever you want absolute control of the shifts. It's also a real mile-eater when cruising motorways, and you really don't notice it working away in the background, or ever think about it having just three cylinders.

If you're expecting to regularly drive with four seats occupied and luggage in the boot, you might consider the 1.5 TSI 150PS which ups the power to 148bhp, knocks a full two seconds off the 0-62 time (taking it down to 8.2 seconds), and extends the top speed to 139mph. Officially it does all this while still returning a combined consumption of between 47 and 51mpg!

With a whiff of lifestyle estate around the rear-threequarters and tail and topped off by a rakish, cab-forward glasshouse, the Scala's sharp-edged bodyshell catches the eye. Based on the same platform as Skoda's larger Octavia, the Scala takes up the same amount of road as a Golf or Focus but trumps them for space — the first thing that comes to mind when you settle in your seat is that old saying about 'room to swing a cat'. For lots of drivers, the Scala's USP will be its roominess: six-footers can sit comfortably with legs stretched.

It's a welcoming cabin too; airy and with a broad, aluminium-look décor strip either side of the large glitzy glass touchscreen at its heart. The well-padded seats are smartly finished in fabric and microsuede, and are shapely and supportive, particularly for your shoulders, with contrasting-coloured bolstering. And not being leather they'll be cool in summer and cosy in winter. Both front seats have height adjustment and large easy-to-use knurled knobs for the backrest rake; both also get adjustable lumbar.

Sitting in the first-rate driving position behind the two-spoke multifunction wheel feels very reassuring; with the seat set high there's still a fist+ of headroom and the view ahead is as good as it gets courtesy of the generous glasshouse glazing and slim windscreen pillars. Unlike many of today's hatchbacks the Scala fields plenty of glass, particularly on the tailgate which makes over-the-shoulder views confidence inspiring when you need to reverse — judging where the corners are is easy-peasy. There are also rear sensors and a camera to help, should you prefer using them to traditional turn-your-head manoeuvring.

Adding to the driver's 'toys' is a Virtual Cockpit digital instrument panel. Not only does it display a pair of stylishly digitised dials bookending a variety of other information, but you can choose from five presentations, including active navigation mapping — whatever you decide, everything is laid out with foolproof orderliness, and all views show the posted speed limit as well as your road speed. Shortcut buttons either side of the central free-standing 9.2-inch touchscreen also ensure quick menu jumps.

Using the infotainment or SatNav is a walk in the park and the Scala's Amundsen setup is without doubt one of the better systems out there even when matched against those in more expensive cars. Along with a dedicated set of physical buttons and switches for the efficient two-zone climate control, it make it very easy for you to keep your eyes on the road.

Naturally you get SmartLink (includes Apple CarPlay, Android Auto and MirrorLink) so you can make full use of your smartphone's apps. There's also Infotainment Online, giving you access to online features such as traffic and weather reports as well as an SOS button in the roof console. On the entertainment front you get an eight-speaker stereo and DAB radio, plus Bluetooth is also on hand. So, all bases covered then.

In-cabin storage is equally well addressed with a large chillable glovebox, generous front door bins that hold large bottles, a decent-sized box under the sliding centre armrest, siamesed cupholders alongside the trad-style handbrake, a tray ahead of the selector lever served by a pair of USB-C ports, another useful cubby in the right-hand side fascia, out-of-sight storage compartments under the front seats, and a sunglasses holder above the rearview mirror. And you don't even have to bring an umbrella because you'll find a compact brolly already waiting for you, holstered in the driver's door!

Other standard equipment not already mentioned includes keyless entry and Start (having the engine Start button on the steering column where an ordinary blade key would go is a logical touch, and especially welcome when driving at night), powerfolding door mirrors (on demand and automatically when locking and leaving), auto-dimming rearview mirror, all one-shot electric windows, privacy glass, cruise control, speed limiter, and auto lights and wipes as well as auto main/dip beam switching for maximum night-time vision without dazzling other road users. Seventeen-inch alloy wheels are standard-fit (although our Scala was fitted with the optional eighteens).

The rear cabin is seriously family friendly with decent headroom and substantial legroom and plenty of room for feet. A drop-down central armrest with built-in cupholders, dedicated central air vents, real-word door pockets, nicely canted backrests with comfy headrests, and large windows, together combine to create a nice place to kick-back in.

Add to that a satisfactory ride quality that — even rolling on 18-inch alloys — is compliant enough to filter out the worst of the lumps and bumps that are the norm on today's urban blacktop. Running free on A-roads, the Scala's suspension does a fine job and, combined with the quiet cabin ambiance, takes all the sting out of long distance trips.

A likeable ride doesn't mean it's not wieldy to drive; with progressive steering weighting, well-managed body control and strong grip, it flows confidently though the twisties, all the while feeling safe and predictable. Exactly what you want from your family transport. It's equally at home in the cityscape where its calm and tidy handling, predictable pedal feel, and good all-round visibility really come into their own.

At 467 litres the Scala offers one of the largest boots in its class; its practical square shape lets it swallow more luggage than its main rivals — with the parcel shelf still in situ you can fit in up to seven carry-on cases. Folding the 60:40-split back seats opens up a substantial 1,410-litre loadbay. Adding to the versatility are strong bag hooks and a Spiderman-esque net hanging from the underside of the parcel shelf. And while it's not the world's biggest powerplant, the Scala's 1.0-litre three-pot is macho enough to tow a braked 1,200kg.

Especially easy to live with, Skoda's Scala serves up an appealing mix of comfort, space and level-headed practicality topped off with some nicely laid-back driving manners. Choosing one will save you thousands when set against some of its class competitors — buy one and you'll get a smart and versatile family hatch plus, as they say, change! ~ MotorBar