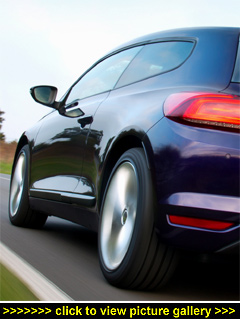 “We Brits certainly like Sciroccos —
after China, the UK is the second
largest market world-wide for the
Scirocco, with over 4,000 of VW’s
muscular two-door, four-seat sports
coupes taking up residence here
last year alone...”

THE RANGE HAS A SCIROCCO FOR EVERY FAN — from those who lust after its looks but still want economy to those who want it because of its looks and for its dynamic ability. Four trims levels are available: Scirocco, Scirocco GT (the likely best-seller expected to take over half of all sales), Scirocco R-Line and Scirocco R.

For those drivers keen to keep costs down there will be something suitable under the Scirocco's bonnet: six turbocharged, direct-injection petrol or diesel engines comprising 1.4 and 2.0-litre petrol units plus a 2.0 diesel that between them cover the power spectrum from 123 through to a beefy 280bhp. Fuel consumption figures run as high as 67.3mpg — and even the 155mph R model manages 35.3mpg despite demolishing the 0-62mph sprint in 5.5 seconds.

Offering perhaps the best mix of miles-per-gallon and miles-per-hour is the GT 2.0 TDI. It's available with either a six-speed manual or DSG autobox, the stick-shift version of which we put through its paces last week.

First, let's get the official economy figure out of the way. As everybody knows, replicating the EU-generated lab results in the real world is not easily done; and is sometimes nigh-on impossible. Making it harder to get every drop of fuel to go as far as possible on real (not rolling) roads is even trickier — and we have to say that it's all Volkswagen's fault!

Because they've gone and made the Scirocco handle. And it's the kind of handling that puts a smile on your face — and then keeps it there all day long.

So while you may start out with noble ideas (or, more likely, purely financial motives) about saving fuel, in reality the Scirocco first seduces and then rewards you with its dynamics to the point that you realise mpg is not the be-all and end-all of motoring life.

Here at MotorBar we do tend to drive our test cars fairly hard but not just to indulge and quantify the fun factor — we want the average motorist to get the same, or better, mpg from their new car that we recorded. Over the course of a hard-driven week 'our' 2.0-litre TDI manual six-speeder averaged 47.2mpg. For a more-ishly driveable sports coupe that was pretty good and, as you can guess, involved a lot of smiling!

At a wieldy 4.3-metres long the Scirocco shows off classic coupe proportions — a low, wide stance that benefits from a low centre of gravity. It puts its power down through its front wheels and from the off the very first thing you grasp is how 'planted' it feels on the road.

Handling is wieldy and well balanced; it conducts itself well when pressing on, grips through corners with minimal body lean, steers precisely (with the bonus of decent feedback) and scrubs off speed with composure.

And, in case your enthusiasm gets the better of you and you overcook it, there's a sure-footed electronic stability system to keep it all shipshape. For a hard-charger, it also shows a good accommodation with ride quality, something that endows it with legitimate 'grand tourer' capability and makes it as easy a car to live with as it is to sling around.

The icing on the handling cake is VW's Dynamic Chassis Control (an Ł820 option fitted to our GT model) that modifies the throttle response, dampers, and steering map to deliver three distinctly different driving modes: Comfort, Normal and Sport. And it works like a charm.

Sport will be the mode new owners will be most keen to try; and they won't be disappointed because unlike the 'sport' settings on some cars, the Scirocco's means 'sport' and not rock-hard 'track' — perfect for public blacktop. Normal is a fine commute fallback and doesn't short-change you when it comes to C&C (command and control) either in the steering or dynamic departments.

Some people still harbour a blind spot about diesels, thinking them both noisy and slow. They need to get out more — with an accomplished driver in the likes of this Scirocco…

With an unwavering 251lb ft of torque on tap from 1,750rpm there's plenty of 'grunt' more or less whenever you want it — and you don't have to rev the nuts off the four-pot to get it. But you need to watch out because while it's quiet at speed it has a 'natural' gait close to three-figures.

This 2.0-litre turbodiesel is also satisfying to drive — be it fast or slow. And neither is its general refinement spoilt by the likeable 'working' soundtrack when boosting the pace.

It may look compact from the outside but inside the Scirocco's cabin makes excellent use of its long wheelbase (2,578 mm) to ace the acid test for coupes: a six-footer can travel behind another of the same height doing the driving. The interior decor is black with black but it's all put together very smartly, and bounded by slim front windows capping the Scirocco's high waistline the cabin feels both sporty and airy (more so if you opt for the panoramic sunroof).

You sit low, which is all part of the Scirocco's racy appeal. Gripped lovingly by the tactile suede-and-fabric upholstered sports seats, the driving position is spot on; ahead of you beautifully clear dials are read easily through the upper rim of the flat-bottomed leather-bound multifunction wheel.

The fist of headroom is as nice as it is unlooked-for; there's ample elbow room for quick press-on steering and, for those times when the adaptive cruise control is taking the strain, proper rests for both your clutch foot and your right foot.

Neither does your left hand have to stray far from the wheel to palm the clean-changing, short-throw gearlever (or use the traditional handbrake); adding to the 'chequered flag' aura is an auxiliary instrument cluster centred atop the fascia reporting on turbo boost and engine oil temperature, and with a stopwatch/lap timer. This is cockpit designed for keen drivers.

Passengers will be relieved to discover that Volkswagen consider the Scirocco's two rear seats as important as the front pair — if you can't take the helm or ride shotgun up front, then you'll be content to travel in the back where good foot and knee room await and where there's space above your head.

From the back cabin you can easily see the world flash by, courtesy of seats set six inches higher than those in the front. Getting out again is as easy as getting in, thanks to driver and front passenger seats that tilt and slide smoothly forwards.

The Scirocco packs a practical surprise in its tail — the deep boot is a usable 312 litres. Not as tight as those pronounced haunches and tapering fastback imply. To put that in perspective, it's 68 litres shy of a three-door Golf's boxier hatchback luggage area, and just a few litres more than the 305 you'll get in an Audi TT Coupe.

Better still, the Scirocco's 50:50-split seatbacks fold down to create a handy 1,006-litre loadbay so if your best friend has four legs instead of two, then the hound can come too! Leave the pooch at home and visits to garden centres and DIY outlets aren't off the weekend menu.

With its distinctive silhouette and wide, low stance, this new-last-year, third-generation Scirocco, in 'GT' spec, backs up strong kerb appeal with an impressive blend of fuel efficiency and dynamic ability. Phwoar! — MotorBar