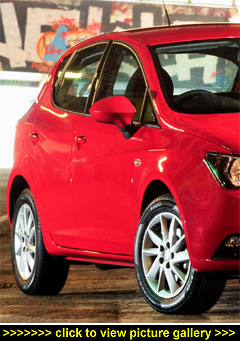 “The fifth generation of SEAT’s Ibiza
range of superminis has just arrived
in the UK with SC three-door, five-
door and ST estate body styles with
sharp new styling and sharper prices
to suit cost-conscious motorists...”

WITH PRICE REDUCTIONS of between £300 and £1,100, the new Ibiza line-up kicks-off at £9,995 and tops out at £17,085. To achieve these attractive new prices the equipment levels have been adjusted but so buyers can still get their ideal spec, the range of extra-cost options has been increased.

E, S A/C, SE and FR are the four trim levels and the most popular body style is the sportier looking three-door SC which up to now has accounted for 44% of sales — a whisker ahead of the 43% achieved by the more user-friendly five-door versions. The ST five-door estate also appeals because it retains a sporty profile yet easily accommodates all of the family clutter, the dog, or the mobility aids of the less mobile.

The ST also benefits from a very low rear sill over which to lift luggage or cargo and its square load space takes 430 litres with the rear seats in place; fold down the split rear seats and this increases to 1,164 litres. Depending on the model, towing weights range up to 1,200kg.

As for petrol and diesel power options, these are well known throughout the Volkswagen Group. Petrol engines can be: 59/69bhp 1.2-litre normally aspirated; 83bhp 1.4; the highly rated new 103bhp turbocharged 1.2; or another turboed unit — the 147bhp 1.4-litre.

Diesel customers have the choice of a 73bhp 1.2-litre TDI, 103bhp 1.6 TDI or a 141bhp 2.0 TDI. Most engines have five-speed manual gearboxes as standard but the most powerful petrol and diesel units are mated to six-speeders. A high-tech seven-speed DSG automatic transmission is available with the 103bhp 1.2 TSI and the 147bhp 1.4 TSI petrol engines. Due to the wide range of powerplants, insurance group ratings vary from a low 3E to 22E.

Competing in the supermini sector against the likes of the Ford Fiesta, Vauxhall Corsa, Peugeot's new 208 and VW's Polo, the new Ibiza needs to look 'the biz' — continuing the sporty image long-associated with the SEAT brand, the new model's body now shows off an edgier look, with sharp crease lines on the front wings and a new defining centre crease for the bonnet; headlights are also new with signature daytime running light strips, and frame a more aggressive upper and lower grille. At the tail, new rear light units are underscored by an angular rear bumper.

By comparison the cabin is on the bland side with lots of dark hard and soft-feel textured plastics that look durable rather than inviting. The fascia panel is brightened by some fresh graphics for the dials but most useful is the much larger glovebox which, following customer feedback, is now twice the size.

As with SEAT models of the past, the ride is still on the firm side (although not as hard as before) and the Ibiza can still give a stiff account of itself on poorer road surfaces. My advice — don't opt for larger wheels; the best size will be the 15-inchers. Also on the subject of wheels, I was not impressed by the fact that if a customer wants that all-important spare wheel, they have to pay an extra £95 for the pleasure. Naughty, although SEAT aren't the only brand guilty of doing this.

First to be put through its paces at this week's UK press launch was the three-door 69bhp 1.2-litre petrol model in S A/C trim with an on-the-road price of £10,930. Officially this model returns 52.3mpg but I reckon most drivers will see around the 40mpg mark.

This version is cheap to buy but performance is no more than adequate: a 101mph top speed and zero to 62mph taking a lengthy 13.9 seconds. With CO2 emissions of 125g/km, the first year's road tax is £0 and then £100 per annum thereafter.

Next in the firing line was the £13,205 ST five-door sports estate with the most popular engine in the range, the 83bhp 1.4-litre petrol unit.

Naturally the performance is a shade better than that of the 69bhp 1.2: top speed is 110mph, 0-62mph takes 12.4 seconds, and officially it will return 47.9mpg. While this unit is no ball of fire, it will fit the bill for most people. I like the ST's estate body style because it offers the most flexibility for daily use and, even when the full extent of the estate's carrying capacity is not being utilised, it drives like a five-door hatch. Furthermore, the real-life consumption was an acceptable 42.5mpg.

Star of the engine line-up is the 103bhp (105PS) turbocharged 1.2-litre TSI petrol unit, a much more modern low-CO2 unit. With maximum torque of 129lb ft delivered from 1,550rpm, it's much more responsive and nicer to drive despite its small engine capacity.

I tried this unit in the five-door with the most popular SE trim level. Strangely, this £14,105 SE model with this engine only comes with the high-tech DSG seven-speed auto 'box — no manual transmission is available unless you take the higher FR specification.

The DSG auto lifts the top speed to 118mph and sharpens up the zero to 62mph time, which drops to 9.7 seconds even as the official fuel consumption improves to 53.3mpg. My figure was 42.4mpg — virtually the same as the older 1.4-litre engine but much faster and serving up much better response and flexibility. With CO2 emissions of 124g/km the first year road tax bill is £0. After that you'll pay £100 per annum.

The downside? A bland and dark interior, firm-ish ride and unsettled on poorer road surfaces. That noted, of the three models tested the 103bhp TSI would be my overall choice because of its great modern technology engine, fast and seamless double-clutch automatic transmission and easy-to-live-with five-door hatchback body. It's also well equipped, competitively priced and wears a smart new suit. — David Miles