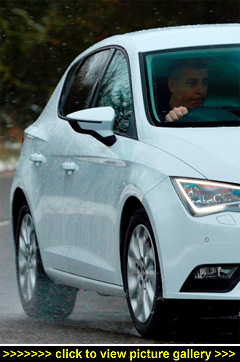 “The racy and roomy all-new Leon
is being billed as SEAT’s biggest
launch, under the marketing strap-
line ‘Enjoyneering’ — explained to
us cynical media types as a word
combining Spanish design with
German engineering...”

PRICES FOR THE INITIAL NEW LEON LINE-UP of seven petrol variants range between Ł15,670 and Ł21,835; the seven diesel derivatives will cost from Ł17,370 to Ł22,635. In UK showrooms this month, the five-door Leon will be selling against the Ford Focus, Vauxhall Astra, Honda Civic, VW Golf and Skoda Octavia.

It will be joined in July by a three-door SC range, and later this year a Sports Tourer, which will first be shown at the Frankfurt show. More engine options will be added to the line-up this year, with the sporting Cupra version topping the range in Britain by early 2014.

The all-new Leon arrives after five years of increasing sales for SEAT UK which have lifted registrations by over a third at a time when the market has been contracting overall. In fact, last year SEAT sold 39,978 new cars in the UK — an all-time record. The two previous Leon generations since 1998 have between them put over 133,100 models on UK roads — and it accounts for a third of SEAT sales in the UK.

All Leon models have MacPherson-type coil over strut front suspension with a semi-rigid rear axle; those above 147bhp benefit from a multi-link set-up at the back with FR models having 15mm shorter and stiffer springs and shock absorbers.

The Leon has a UK sales mix of 50:50 between retail and business user-chooser customers. The most popular engine will be the 1.6-litre TDI — taking 54% of all sales because of its official 74.3mpg and 99g/km CO2 emission figures, which due to the BIK tax penalties are significant for company drivers.

The most popular petrol engine will be the highly rated and high-performance turbocharged 1.2-litre TSI unit, expected to take 14% of sales. This gem of an engine — despite its seemingly small capacity — is ideal for retail customers because of its lower purchase price, the cheaper cost of petrol over diesel, 57.6mpg fuel economy and 114g/km emissions. Consequently road tax is Ł0 for the First Year and then just Ł30 per annum for the second year onwards.

SEAT's motorsport DNA shines through with the new Leon. Whilst its Volkswagen Group fellow family members also use the same new platform, the Leon is clearly the sharpest and sportiest for exterior styling. The new Golf still looks like a Golf; the new A3 looks like a conventional (but still classy) Audi; the Skoda Octavia looks bland but roomy. But the Leon looks edgy, purposeful and full of racy intent.

Sharp styling lines include sculptured side panels and an angular grille. Overall, due to its longer wheelbase, it looks well balanced. Another improvement is the slimmer front pillars which also significantly improve front-quarter visibility.

The Leon's designers have done a good job creating a more driver-focused cabin, better controls layout and softer surfaces although there is still plenty of 'blackness' which lessens the light and airy feel offered by the new Golf and A3.

Seven airbags protect occupants but owners can also specify additional safety items with driver assistance and technology packs. The all-new Leon has also received five-star safety recognition from Euro NCAP testers. Most versions are fitted with an electronic differential which gently brakes the inside front wheel through a corner to improve grip.

Sitting on a longer wheelbase and wider track than the second-generation Leon, the new model exhibits better stability and handling characteristics; the suspension is now more compliant and the ride more comfortable than any other SEAT.

This third-gen Leon is the most technically advanced version yet to hit the roads and features full LED headlamps. Depending on the specification level chosen there is also the SEAT Drive Profile which has Normal, Sport, Eco or Individual modes covering adjustments for performance of the engine and gearbox, steering input, climate system and ambient lighting.

During my brief test drive I tried the best-selling 103bhp 1.6-litre TDI engine and for high-mileage fleet and company car drivers this will be the engine given to them. It was smooth, responsive, fleet-of-foot and returned an impressive 59.1mpg during my drive over winding and hilly Cotswold roads.

With no road tax costs and only 13% company car tax I can see why fleets will go this route. However, it costs Ł18,490; that's Ł1,700 more than the four-cylinder 1.2-litre direct injection and turbocharged petrol unit which has the same power output. And don't forget that diesel fuel now costs more at the pumps.

For myself, I would opt for the 1.2-litre TSI 103bhp turbocharged direct injection petrol engine — it's available in other VW group ranges and is rightly regarded as one of the best engines available today.

It kicks out 129lb ft of torque from only 1,400rpm so is fantastically responsive, accelerating from low speeds without hesitation, and it has a slick six-speed manual gearbox (or a seven-speed DSG twin-clutch auto which is even more fuel- and CO2-efficient).

Today we must adjust our view as to just how well smaller capacity petrol engines actually go because small doesn't necessarily mean low power and sluggish performance. The development of turbochargers used in conjunction with direct fuel injection and variable valve and injection timing now gives a 'small' 1.2-litre the performance we would once have expected from a 1.8 or 2.0-litre petrol engine. All with low CO2 emissions and fuel economy that's getting close to that of a diesel.

The big payoff is that these new petrol engines are cheaper to buy than diesel units, and petrol is cheaper than diesel. Sometimes these days it clearly pays to think small!

Other reasons to buy include the sharp and sporty styling, improved interior space, better build quality, lighter weight with better agility, improved and more comfortable ride quality and, of course, that gem of a new-generation petrol engine. — David Miles