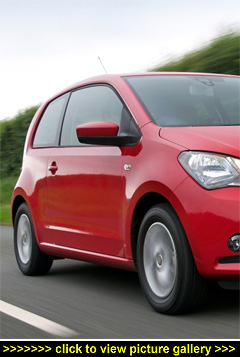 “SEAT’s city car, the Mii, might be
a small car but it also has a small
price and small running costs.
Plus it can be had with three or five
doors. Sounds reasonable...”

AS FAR AS PRICE GOES the Mii, SEAT's version of the VW Up and Skoda Citigo, starts from just Ł8,060 (the Skoda from Ł7,990 and the VW from Ł8,265). All three ranges offer 1.0-litre, three-cylinder petrol engines with the choice of 59 or 74bhp power outputs.

What first impressed me about the Mii was the low cost of actually buying one using Seat's PCP personal credit purchase scheme. My test version, the 59bhp (60PS) three-door in Toca trim, is Ł79 a month for 36-months with a deposit of Ł2,719. A more usable five-door Toca model costs Ł85 a month.

Not to be outdone, Skoda have just started advertising their Citigo 59bhp SE three-door for a Ł69-a-month fee with 0% APR finance after a deposit of Ł2,427 — and they are also including three years' free servicing.

VW's offering for their three-door Up starts from Ł99 a month for 35 months with a deposit of Ł2,743 and includes free insurance for owners aged 21 years and over. All offers, of course, have various conditions to them, so read the small print carefully.

In real terms what that means is that for Ł79 a month — the equivalent of five pints of lager or five glasses of wine a week — I could get mobile with a new set of SEAT Mii wheels. Bear in mind industry figures show that between 80 and 90% of UK customers now buy or lease a new car using finance of one form or another. In these uncertain financial times, and in spite of the poor interest rates on savings, it appears we still like to hang on to our cash for possible 'rainy days'.

The three-door SEAT Mii with a 59bhp 1.0-litre engine and Toca trim is priced at Ł9,995 — and its throaty sounding, three-pot petrol engine will officially return 62.8mpg in the Combined Cycle. On test, covering my usual motorway, country A/B roads with some in-town travel, the test drive figure was 55.4mpg.

However, going into the on-board computer's data I found the long-term average was 45.6mpg; some previous users had either driven it much harder than me or spent more time on motorways. It's my experience that these small engines suffer more than 1.4/1.6-litre petrol units at 70mph motorway cruising speeds so far as fuel economy goes simply because they have to work harder.

The Mii's little engine is no ball of fire on the open road either, as shown by its zero to 62mph acceleration time of 14.4 seconds (the maximum speed is 99mph). Driving up hills takes its toll on performance, as too does carrying passengers — and overtaking slower traffic on A/B country roads needs a little forethought. On the plus side, CO2 emissions are only 105g/km so road tax is Ł0 for the first year and then only Ł20 for year two onwards. Insurance is rated at a very low Group 1.

Additionally, for this 59bhp engine, there's an Ecomotive level of specification. The power is the same but the torque's a shade less, at 68lb ft instead of 70lb ft. However, the CO2 emissions are only 96g/km so currently road tax is free every year. Both versions have a five-speed manual gearbox fitted as standard.

The 74bhp (75PS) version of the 1.0-litre unit (available with manual or auto gearboxes) has the same 70lb ft of torque but its official average fuel consumption is 60.1mpg; CO2 emissions are 106g/km so road tax is the same as for the lower powered model. With a manual 'box the top speed goes up to 106mph and zero to 62mph takes 13.2 seconds.

Confirming the appeal of the Mii's low purchase price and fuel economy potential, the 1.0-litre 59bhp unit is the most popular in the UK with three-door models (Ł350 less in price than five-door versions) accounting for just over half of total sales.

When it comes to specification choices buyers still want more than basic levels, as shown by just 4% of UK customers going for the base S level cars: 10% opt for the S+AC (AirCon) version; 4% for Ecomotive; 28% for SE, 41% for Toca; and 13% for Sport.

All the controls are well placed and simple to use. Visibility is also first class — ideal for a city car. The interior fascia and door trims use a combination of painted metal surfaces and rigid plastics for durability but there's an appealing element of modern chic about them. The cloth covered seats add a little 'warmth' to the overall interior appearance.

At the rear is a small, deep boot of 251 litres with the only drawback being the high rear sill which means heavy bags have to be lifted over it. With the rear seats folded the load space goes up to 951 litres. While its exterior styling looks a bit anonymous, there's no denying that it's fit-for-purpose.

The ride comfort is generally quite good for a small car given the limited suspension travel these cars generally have. Potholes or sunken trenches across poorly maintained roads will cause it to hop around a bit, even at low speeds. On the plus side, parking is easy due to the excellent visibility and its compact 3.5-metre body length. Just don't expect rear seat passengers to enjoy their 'Mii time' because of the limited legroom and far from easy access afforded by the three-door bodyshell — the five-door version is much more convenient.

Plus points include low-cost finance purchase option, low-cost road tax, low-cost insurance, reasonable real-life fuel economy, nippy to drive in urban conditions, easy to park, and a price that's down on VW's Up.

To answer several questions I received during my personal 'Mii time'. It's pronounced 'Me' and SEAT says the word Mii has no meaning. But after a little research online it's clear that many think 'Mii' follows Nintendo's use of 'Wii'. Others suggest 'Mii', used in Spanish as 'my' as in 'my name is' — seems logical for a Spanish brand.

Whatever Mii is taken to mean, for SEAT it's undeniably a price-leader range for what is an increasingly popular brand: SEAT's UK sales have increased this year by a healthy 15.2%. and figures just released show they have already sold more new cars so far this year than they did in the whole of 2012 which was itself an all-time record year. In light of that, Mii could be taken to mean 'Mii too'. — David Miles