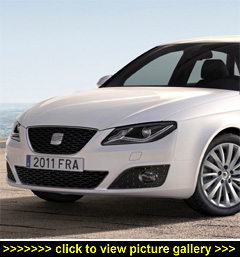 “SEAT’s latest Exeo has been face-
lifted, but only mildly — the only
surface changes are LED running
lights (this year’s motoring ‘shoulder
pads’), new wheels and some cabin
tweaks. Nothing major then...”

SEAT IS, HOWEVER, INJECTING some fresh brand identity with a new concept called the IBL — a four-door coupe à la VW Passat CC. It's a good-looking machine and SEAT really needs this kind of ID boost — the current Exeo is essentially an old Audi cast-off (the previous-generation Audi A4, merely rebadged) and doesn't help the Spanish spirit of bravado…

Given its recent makeover, now seems an appropriate time to get reacquainted with the Exeo. In addition to the external tweaks, this year has also seen the arrival of a new gearbox in the Exeo range: Multitronic. Like the car itself, Multitronic comes from the workshops of Audi.

SEAT describes its Multitronic gearbox as smooth and efficient. Frankly, if you've tried the VW Group's excellent DSG sequential manual gearbox, Multitronic is going to be something of a letdown.

Multitronic is not a DSG-style sequential manual but a true automatic using CVT (continuously variable transmission). It lives up to its 'smooth' billing all right, with a seamless flow and effortless progress.

But like all CVTs, it has a tendency to drone when you're accelerating: the engine revs rise and just stay there until you lift off the gas, especially when you're in Sport mode. Wearisome is the word for it.

Multitronic does also offer stepped gearchanges via steering wheel-mounted shift paddles, but these are a pale imitation of the razor-sharp DSG gearbox: the changes are sluggish and artificial in feel.

However, if you like the idea of Multitronic, the only engine it comes with is the 143bhp 2.0 TDI CR diesel. This is a well-known engine, used widely in VW Group products — and with good reason: it's punchy (143bhp), torquey at low revs (236lb ft) and well-matched to the automatic 'box.

SEAT claims a respectable, if unspectacular, average of 48.7mpg for it, although I averaged only between the high-30s to low-40s. The main and only problem with this engine is its refinement: by modern standards, it's noisy.

The recent changes to the Exeo have improved the one big bugbear of the old model: rear seat space. Reshaped seats release an extra 44mm of legroom although it's still not what you'd call class-leading. On the other hand, there's plenty of boot space in the ST estate's capacious rear.

The interior remains the Exeo's strongest suit, with Audi levels of fit and finish and superb quality throughout. Indeed, this is the Exeo's big attraction: a car that's basically an Audi but priced at bargain levels. — Chris Rees