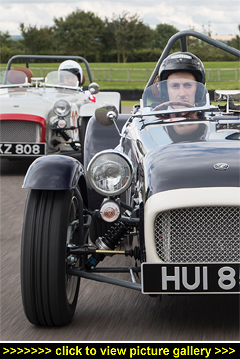 “In 1958, a certain Graham Hill took
delivery of the very first Lotus ‘Super’
Seven. What’s surprising is that
Lotus-founder Colin Chapman’s
iconic Seven was never conceived
as a racing car...”

NEVERTHELESS, RACING DRIVERS were drawn to it because it could not only win races out of the box but also because it was, quite simply, the purest sports car around.

Some things never change. Sixty years on Caterham is still making the Seven — and it's still the purest sports car on sale. And I suddenly find myself imagining I'm Graham Hill behind the wheel, thanks to Caterham's latest Seven: the special edition SuperSprint.

The SuperSprint is a brilliantly detailed, race-themed throwback. Achingly redolent retro touches are everywhere you look; for instance, the wheels are not alloys but old-school steelies with a delightful cream finish, while the front wheels are protected by 1950s-style cycle wings.

Ardent drivers familiar with Colin Chapman's 'add lightness' diktat can keep the faith and order their SuperSprint with either one or two seats; and 'my' test car was a single-seater. For the record, Lotus never made a single-seater version of its Seven in the Sixties but if they had, this is what it would have looked like.

The passenger side is covered with a Mohair tonneau, while the rollover bar has a special 'solo rider' shape. There's no windscreen — just a single 'Brooklands' aero screen to blow every conceivable cobweb to oblivion — while the four-point race harness underscores the Graham Hill vibe.

Sitting ultra-low in this tiny car, you're greeted by a sea of exposed metal and bespoke-finished wood. The Innes Tan dashboard is bedecked with period-style Smiths dials and the steering wheel is a rather fab Moto-Lita wood-rimmed item. To start the engine you twist the chromed battery switch (it really looks the part) and press the starter button.

The sound that's emitted on doing this is unexpected — well, at least for a Caterham: a soft off-beat thrum rather than an ear-splitting rasp. That's because under the lift-off bonnet there's a Suzuki-derived three-cylinder turbo engine. It's been tuned by Caterham Works Racing to deliver 95bhp, all from just 660cc.

95bhp may not seem much for a real sports car, but since the SuperSprint weighs just 490kg it's actually more than enough for surprisingly nippy performance (0-60mph in 6.9 seconds). The turbo means there's always plenty of torque, so the SuperSprint is very easy to drive at any speed. It also means you don't need to change gear very often, which is a shame in my book because one of the joys of a Seven has always been wielding the super-snicky gear lever across its ultra-fast gate.

The steering, as with all Caterhams, is an utter joy: completely analogue and ripe with feedback. The suspension set-up is race-inspired and adjustable. You still have a live rear axle, though, which is very 1960s. On narrow Avon 155/65 R14 tyres it's easy to get the rear-end to move around whenever you want, and at comparatively low speeds, so there's endless fun to be had and all without breaking any speed limits.

That's precisely the genius of this SuperSprint: it's hilarious fun at any speed. I've always thought the essence of the Seven's appeal boils down to being ultra-simple — a box the SuperSprint ticks fulsomely.

At Ł30K the SuperSprint isn't cheap — and that's without options such as a windscreen. But you're spared the quandary of whether to buy one because all 60 examples of the special edition were spoken for within seven hours of going on sale. Shame. Still, you can always buy a Seven 160 (priced at a bargain Ł17,495) and invest in a few period accessories. The message to Caterham is clear: Please Sir, can we have some more retro! ~ Chris Rees