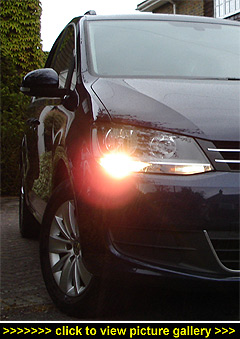 THANKS TO ITS ONE-BOX body shape, the new Sharan's cabin is welcomingly spacious with decent headroom in all seven seating positions. It's also well-furnished and well-fitted and, in addition to the generous head, elbow, leg and foot room, there are multiple storage solutions and cup-holders including smooth-running, good-sized drawers under both front seats along with some 'secret' storage bins hidden beneath the mats in the second row floor — all essentials for a family-themed carrier.

For those drivers tasked with chauffeuring around six others — whether they are major or minor others — the Sharan's well-padded individual seats are all easy to reach. Big front doors make getting in a doddle and access to the second and third rows is about as easy as it gets courtesy of the wide, sliding rear doors. Big windows ensure the cabin remains light and airy, even during a gloomy winter's day.

Once aboard the Sharan you'll enjoy a commanding driving position with clear views forward and to the sides — it's an easy vehicle to place accurately on the road. The steeply raked windscreen runs fluently on from the noticeably sloping bonnet and the fixed quarterlights, as well as looking neat, do help with visibility.

The patterned cloth-upholstered front seats have loads of height adjustment (and the headroom to go with it) and lumbar adjustment; the driver benefits from 6-way power adjustment along with 4-way powered lumbar support and height and reach adjustable steering. Side bolstering on the backrests and the seat bases is light but effective — and all seven individual seats are equally supportive; and all provide good back and shoulder support, too.

The wide, well-padded centre armrest can be slid forward as well as adjusted for height; and you can make full use of it as there's no handbrake lever to get in the way — all models, from the entry-level S up, have an electronic parking brake with auto hold function. The three-spoke, multifunction steering wheel has a smooth leather rim that's good and grippy in your hands and the switches are clear, crisp-acting and feature high-end finishing with satin chrome filleting. The fascia is equally well finished and logically laid out — as you'd expect; it is a Volkswagen!

Other nice touches include remote locking of the sliding rear doors — especially reassuring when you're carrying small passengers. And if you specify the optional touchscreen SatNav with voice control and rear-view camera (Ł1,885) you'll enjoy first class navigation guidance and 3D graphics. The rear camera is a definite boon when reversing as it provides an undistorted view of what's behind you with accurate guidelines to follow.

Mechanically green it may be, but the latest Sharan's 2.0-litre turbodiesel has a lot of 'pulling' power — 258lb ft of torque at 1,750-2,500rpm. And whatever gear you're in, it's never further away than a squeeze on the accelerator pedal. Zero to 62mph takes 9.8 seconds. Top speed is 130mph and you need to keep an eye on the speedo because, unchecked, the 2.0 TDI Sharan eats hills for breakfast and romps along motorways with ease so you can suddenly find yourself travelling well above the legal limit.

Mated to a six-speed manual gearbox (with a rewarding slick and accurate change action), the Sharan BlueMotion's 167bhp TDI engine is well suited to its 'green' people-carrying role — not only is it a gutsy powerplant that's agreeable to drive but it's also fuel-efficient and cleaner-breathing, so owners get more miles for their pounds and pay less pounds for their taxes.

Volkswagen certainly knows a thing or two about the ride-handling conundrum — and it shows on the road, where the latest Sharan rides well over poorer surfaces and speed humps as well as, out on the open road, handling well. In fact, it handles with far more ability than you might expect for something with an MPV body.

This new Sharan can be hustled without hassle, making it rewarding from behind the wheel, and proves that there can be 'fun' in function and that the two don't need to be mutually exclusive.

Driven around the houses, the Sharan is pleasantly undemanding and its well-weighted, speed-sensitive power steering makes light work of both city driving and parking.

In addition there are active front head restraints, Isofix child seat preparation on all five rear seats and more airbags than you can shake a stick at: driver's and front passenger's front and side airbags, curtain airbag system for front, second and third row passengers, side airbags for the second row and also one for the driver's knee.

The Sharan's seven-player seating plan is a conventional 2-3-2 layout and the easy-to-use sliding rear doors are a standard feature and make it easy to step inside. And, good news for school-runners, they also make it easy to shepherd in small children quickly and safely.

Our test car had the optional powered sliding doors — and well worth the extra Ł625. Conveniently, these can be operated using the switchgear on the doors themselves (inner and outer), remotely via the centre stack or by pressing the key fob either from inside or outside the car. A warning beep lets you know they're powered shut. Talking of locking, the door locking and unlocking settings (one, all, etc.) are easily customised via the onboard computer.

Row two offers passengers a choice of three individual seats, all of which can be slid fore and aft (or folded) to suit. Those sitting here have loads of legroom to stretch out and backrests that adjust. Sturdy pop-up tables are fitted to the rear of the front seatbacks; raised, they are strong enough for writing on (so good for crayon-wielding kids as well as organised adults!). Each has a cup/beaker holder and there's also a bag hook under each tray.

Second row passengers also have access to large bottle-holding door pockets, their own lights and their own dedicated air vents. The sliding doors are especially easy to open and close, both from inside and outside the vehicle.

Row three — always seemingly the first choice of children — also welcomes adults; not only are the full-size pair of seats comfortable, they're also very easy to get to (as well as to get out of again!) from either side of the car thanks to the smooth-acting tilt 'n' slide action of the second row's two outer seats — so you just step in and sit down.

Even in the third row you'll find headroom, adjustable backrests, efficient air vents and adequate built-in storage boxes. All five individual seats in rows two and three have full three-point seat belts and headrests that drop down to maximise the driver's rear visibility when not in use.

Like every over people-carrier on the market, fill all seven seats with bodies and you reduce space for their luggage. That noted, what is available with seven aboard the Sharan — 375 litres — is very much worth having. Equally important in max-capacity mode, all six passengers and their driver enjoy plenty of personal room. And with just five aboard, you'll be hard pressed to fill the Sharan's deep and accommodating boot.

Fold the second and third row seats into the floor and you have a cavernous 2,297 litres of load space with a completely flat load floor. And if you really want to max-out the loadbay, all five seats in rows two and three can be removed. Loading is easy in all weather as you're 'shaded' by the big, high-opening tailgate.

At 4.85 metres long and 1.9 metres wide, the Sharan is no supermini but even so running costs won't bite too hard — our week-long test average of 47.2mpg (officially 38.7, 48.7 and 56.5mpg respectively for urban, combined and extra-urban) will make most BlueMotion owners feel the opposite of 'blue'. It also makes for a feasible 700-mile range between visits to the pumps.

While the Sharan is composed and reassuring and handles very much like a family saloon, its primary appeal is as a 'people shifter' — and it doesn't take many miles to appreciate that its core strength is without doubt all about comfortable carrying. It makes a great long-distance 'ride' and is relaxingly smooth on motorways, where the restful, well-insulated cabin makes it a great place to chill when there are miles to cover. — MotorBar