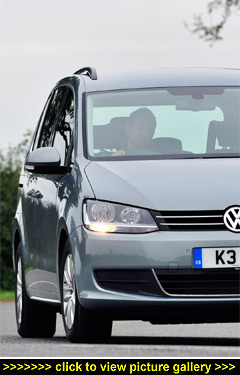 “After 15 years, the new generation
of VW’s large seven-seat MPV,
the Sharan, is in the showrooms —
and the only parts carried over are
the front sun visors!”

THE DISTINCTIVE NEW VW FAMILY 'FACE' is used, giving the latest Sharan a really modern appearance for what is an out-and-out people carrier. Now, too, thanks to rear side sliding doors, access is much improved for middle and rear row passengers.

Around 60 per cent of sales are projected to come from fleet customers and these will include business chauffeur, taxi, private hire and minicab operators. Prices range from Ł22,980 up to Ł31,680 and the main selling version, the 2.0-litre TDI 138bhp turbodiesel with SE trim and equipment, costs Ł26,370.

Key features of the new model include seven seats with a new EasyFold seating concept, side sliding doors, a range of direct injection and highly economical petrol and diesel engines as well as a high standard specification.

The 1.4-litre TSI and 2.0-litre TDI 138bhp manual versions are available from launch, with other engine options following at the start of 2011. All Sharans, except the petrol 197bhp variant, are designated BlueMotion Technology models and feature Stop/Start and battery regeneration systems as standard.

Safety is a primary concern to drivers of people carriers and, reflecting this, the Sharan comes well-equipped. Standard safety equipment on all models includes ABS, Electronic Stabilisation Programme (ESP) and seven airbags with a knee airbag.

Four trim levels will be offered in the UK: S, SE, SEL and an Executive version with six seats, aimed at the business market.

For maximum convenience, sliding doors are now standard and the EasyFold seating system ensures easy access to the rear row of seats. What's more, priced at Ł580, the second generation of Park Assist is also available on the Sharan. Not only does the new system require less space to perform automatic parallel parking manoeuvres, it also allows the Sharan to be parked in spaces at ninety degrees to the kerb.

We drove the 2.0-litre TDI 138bhp SE with the six-speed manual 'box (the predicted main seller), priced at Ł26,370. First impressions are of the first class and much improved ride comfort and sharp handling characteristics that shine through even with this large people carrier.

The equipment level, even for the SE version, is very high so electrically-operated windows, mirrors, air conditioning and a DAB radio/sound system are just some of the items included.

The styling looks really smart and business users or retail customers should be happy to be seen driving an MPV. Importantly, the fold-flat seating is very easy to use in its various combinations and if all rear seating is folded flat there is a massive space for load carrying. It would double as a weekend family vehicle and weekday workhorse really well. — David Miles