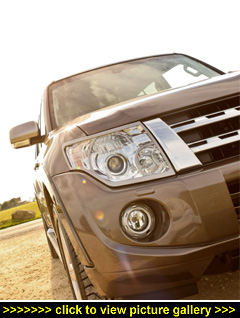 WHAT'S EVEN BETTER NEWS in these days of ever-escalating fuel costs is that this revamped 3.2-litre engine can, despite the Shogun's big seven-seat dimensions and serious 4x4 hardware, muster 33.2 miles to the gallon in the official combined cycle. Our week's test average, on mixed roads with a large chunk of town driving thrown in, was a creditable 28.6mpg.

This latest generation 3.2-litre four-cylinder, common rail, direct injection turbodiesel is Euro V-compliant and kicks out 197bhp with less noise than previous units — and more torque. And despite being a four-pot it still produces sufficient 'grunt' (325lb ft from 2,000rpm) to tow 3,500kg (braked).

Top speed is 111mph with 0-62mph shrugged off in 11.1 seconds. Drive is through a five-speed auto 'box and those eleven seconds feel quicker than they sound on paper. At the same time tailpipe emissions are leaner — now down to 224g/km.

The automatic transmission might only have five forward ratios but it delivers the power smoothly and you can, at any time, nudge the lever to the left for manual gear changing, sharper acceleration or effective engine braking. Manual mode is very likeable — we used it a lot. The currenty selected gear is, helpfully, always clearly shown in the rev-counter.

Press the accelerator hard into the SG3's overmat and you'll hear the turbodiesel working. I like that; you feel connected and in control. And, besides, there's more than enough 'muscle' to keep the Shogun alert in town as well as on the motorway. Travelling at speed, it's quiet and relaxing.

Putting a Shogun on your driveway will cost you between Ł29,499 and Ł40,999 — not bad when you consider what an entry-level Range Rover costs: Ł69,485 for TDV8 power and five seats. For your Mitsubishi money you'll get an authentic, go-anywhere 4x4 with seven seats that's trustworthy both on and off the road.

When you've finished pressing switches you can settle back in the driver's seat and revel in the commanding driving position — visibility is excellent (even to the rear) thanks to slim A-pillars, deep windows, big door mirrors, a near full-width rear screen and the Shogun's 'squared-off' bodyshell.

Being able to accurately place the five-metre-long Shogun is not just an advantage in cut-and-thrust traffic but equally vital when steering a safe passage through the rough.

And when it comes to off-roading the Shogun has been engineered for a life in tough terrain of all kinds. A combination monocoque bodyshell incorporating a hefty ladderframe chassis is used to provide a robust and torsionally stiff body. The knock-on from this is predictable handling and consistent driving control.

The Shogun is a long, tall vehicle and, not unexpectedly, there's some (actually, surprisingly little) body roll during hard cornering but it stays composed even negotiating quite testing bends — in other words, it does nothing to undermine your confidence when getting a move on.

The power steering has enough 'give' to prevent broken fingers off-road and is perfectly okay on the tarmac, where the Shogun feels decisive — particularly so in 4WD high.

The suspension, while easily up to coping with demanding conditions off-road, contributes to a firm-ish but comfortable ride on the blacktop, smoothing out the worst of the bumps and the ever-increasing rash of potholes. The smart 18-alloys don't degrade the ride but it helps that they're wrapped in 265/60 Dunlop Grand Trek rubber. The brakes (vented discs front and rear) are nicely progressive; there's good feel and real bite — and they're more than up to the job of reining-in the heavyweight Shogun.

On road or off, the Shogun is a proven, no-nonsense machine with all the essential hardcore 4x4 essentials: four-wheel drive (selectable on the move); 2WD high (driving the rear wheels only); and low ratio 4x4 with a locked centre differential — the various 2/4WD modes are selected by a lever alongside the auto's selector stick as opposed to an electronic 'all-terrain' rotary dial as now found on the likes of the Range Rover. A display between the speedometer and rev-counter shows the prevailing 2/4WD mode.

The Shogun will also wade 700mm-deep water, climb 48-degree slopes and can keep all its wheels on the ground even when driven sideways across a 45-degree hillside (not for the faint-hearted!). For additional on-road safety, active stability control and traction control are standard-fit items. Snow? Pah! The Shogun laughs in its face.

All of which explains why Shoguns appeal to, and are so popular with, a wide range of users from the police and rescue services to businesses, ordinary motorists and even school-run mums.

Space-wise, the Shogun's large, light and airy cabin offers plenty of room for the driver and six passengers. The comfy second row will take three adults without compromise (there's loads of leg and knee room plus good foot room for all three pairs of feet); alternatively, two can really settle-in and lounge either side of the padded centre armrest (with pop-out cup-holders). Rear passengers also have their own fan and temperature controlled air vents, reading lights and sturdy grab handles (front passengers also have them on the A-pillars).

And although the rearmost pair are less padded than the second row, they're proper, easily accessed seats although generally best suited for kids. Third row passengers also have side-hinged windows that open about an inch — enough for some extra summertime ventilation. When not required, the rearmost pair of seats easily fold down into the loadbay floor.

If you're running five-up, you can also carry a respectable amount of luggage. And with all seven seats occupied, you'll find some extra storage under seats six and seven.

However, should your cargo needs take priority over passenger room then maximising load space is straighforward: fold and tumble the second row seats and you'll have a very accommodationg 1,790 litres with a long, flat loadbay at your disposal. Loading is hassle free courtesy of the wide, side-hinged rear door and mid-thigh-height cargo bay floor.

You sit upright in the Shogun so the tilt-only steering wheel is not a problem, and the supportive two-stage, heated and electrically adjustable driver's seat ensures you're well placed behind the good-to-hold multifunction (audio, 'phone and cruise) leather-wrapped wheel.

For a driver, it's a particularly relaxing environment to climb up into — a full-length sidestep and large door openings ensure getting in and out is easy. Another good feature is the doors — not too wide, so car park use is not a squeeze. Both front seats, incidentally, have 8-way power adjustment and height-adjustable seatbelts. Cabin fit and finish is fine and there are lots of built-in storage spaces throughout the cabin (including a large glovebox and front door pockets) and in the boot area.

Along with substantial space and versatile people/cargo and work/leisure flexibility, the handsome and well-dressed Shogun delivers dependable go-anywhere ability, more than enough kit to satisfy and, if you're into long-term relationships, a toughness that means it will be with you for as long as you choose. — MotorBar