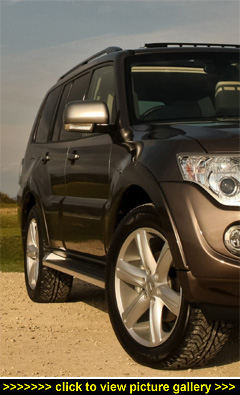 IN ITS LATEST 2012 INCARNATION, Mitsubishi's long-serving figurehead 4x4 comes with an improved specification, a cleaner 3.2 diesel engine and substantial towing weights to keep it competitive in its sector.

Nowadays it faces competition from the improved Land Rover / Range Rover brand as well as from 'softer' SUV 4x4s such as Audi's Q5 / Q7 and BMW's X3 / X5 / X6 models as well as from less expensive and cheaper to run lookalike 2/4WD crossovers such as the Ford Kuga and Nissan's Qashqai.

The 2012 Shogun range still offers both three- and five-door bodystyles — all powered by the latest 3.2-litre, four-cylinder DI-DC direct injection turbodiesel engine. Additionally, all come fitted with four-wheel drive with high and low ratio gearing. Prices start at Ł30,099 and range up to Ł42,799.

Trim levels have been renamed for these revamped models: the best-selling five-door, seven-seat Shoguns are now labelled SG2, SG3 and SG4 and have been joined by a special edition Black version sporting more bling — big shiny black alloy wheels designed to appeal to non off-roading business users with a desire to affirm their street cred. The SG2 level offers a choice of auto or manual transmission; all other specs come only with an automatic transmission.

Visual changes outside are minor and inside there's an improved look to the cabin; but the most significant change to the latest Shogun is under the bonnet. In three-door manual guise the 3.2-litre DI-DC turbodiesel now returns 36.2mpg in the official Combined cycle (up from 30.7mpg); the five-door auto manages 33.2mpg (up from 26.7mpg).

Emissions are also better: 213g/km (previously 246g/km) on manual variants and 224g/km (down from 280g/km) for automatics. These are significant improvements that have dropped the three-door by one road tax band and the five-door variant by two. Confirming that the Shogun hasn't 'gone soft', the braked towing capacity for all models remain the same: 3,000kg for the three-door SWB; 3,500kg for the LWB five-door.

The Shogun enjoys a wide range of customers, from yummy mummys to professionals such as the Police and Rescue Services and business user-choosers. It serves as faithfully as a lifestyle vehicle as it does as a workhorse, both off road and on. You're as likely to spot them on the school run as you are towing a traveller's caravan — its appeal really is classless.

At the heart of that appeal is a durable body/chassis. Underpinning the Shogun's distinctive long and tall monocoque bodyshell is a cleverly-integrated ladder-frame chassis. The benefits of this rugged set-up are strength, durability and the torsional stiffness essential for good body control.

Consequently, on road driving is good and well controlled. Perhaps unexpectedly (due to its tough off-road appearance: pronounced ground clearance and muscular wheel arches), the ride comfort is generally first rate due to the front wishbone and the sophisticated multi-link rear suspension.

There's some body lean during cornering but the handling is predictable and the suspension, even with the large 20-inch wheels on my test drive SG4 model, proved to be really good at ironing out the worst of the bumps and potholes. The only issue was the inconsistent feedback from the power steering.

During my test drive of the updated 2012 model year five-door I was only able to drive it on road, where the fuel consumption averaged a creditable 30.2mpg.

Over the years I have driven Shoguns off-road in countries as far afield as Australia and the States; in mud, rock, desert conditions and even — yes! — in the sea. And they have always been superb and trustworthy at all times.

I have also used many Shogun models throughout many generations as my company car, both in three- and five-door body forms, so I know from firsthand experience just how competent they are both when the going gets tough and when used for day-to-day business work on traffic congested roads. The fact that our Police forces use them says a lot about the Shogun's competence and reliability.

Six cylinders is more common in this heavyweight 4x4 sector but the Shogun uses a four-cylinder 3.2-litre unit. While it puts out 197bhp and a relatively modest (in this class, at least) 325lb ft of torque from 2,000rpm, it lacks big engine 'muscle' and responds a little more slowly to a push on the accelerator. Of course, the five-speed auto 'box slows reaction times. Nevertheless, top speed is 111mph with a not too shabby 11.1 seconds needed to get it off the line to 62mph. It's also fuel frugal — 30.2mpg during a week-long test.

The drivetrain includes all-wheel drive: two-wheel high ratio driving the rear wheels; four-wheel drive selectable on the move. And you can call on 4x4 traction in low ratio with a locked centre differential. All modes are selected though a transfer box lever, not an all-terrain rotary dial as is now found on many large 4x4s. Also incorporated is active stability control, traction control, and ABS with brake-force distribution.

The 'kit count' is high for all models — and the SG4 model is higher still. All the essentials are included: keyless entry, multi-speaker Fosgate sound system, leather upholstery, electrically-adjustable and heated front seats, integrated Bluetooth, powered sunroof, electric windows and door mirrors, on-board computer (with a compass, barometer and altimeter), automatic lights and wipers and AirCon (front and rear).

You also get seven seats in three rows — the third row easily folds away into the load area floor when not in use. There's up to 1,790 litres of load space should you have need of it. And mounted externally on the side-hinged rear door is a proper spare wheel.

Against? The latest large premium SUVs have better road manners and brand desirability but there are many good reasons to buy the Shogun: good looks, seven seats, high specification, and comfort. It's also a genuine 4x4 with great off-road capabilities.

Although the competition from newer big 4x4s is very strong, today's Shogun should not be overlooked because it can still give a good account of itself whether used for very hard work, just work or family leisure. However you use it, it remains a tough, roomy and reliable 4x4. — David Miles