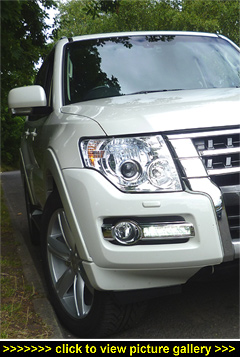 “Shogun — a fitting name for an
all-conquering car and used to great
effect by Mitsubishi for its take-no-
prisoners 4x4. Shoguns first came
ashore in the UK back in 1985 —
and were an instant success.
Thirty years on and it’s still here, its
reputation for toughness, longevity
and off-road ability undiminished...”

SPORTING BIG, BOLD DON'T-MESS-WITH-ME LOOKS, the five-door, seven-seater Shogun exudes real presence. Heading up Mitsubishi's other crossover/SUV models — the ASX, Outlander, and not forgetting the Japanese brand's lifestyle-oriented pick-up, the L200 — the Shogun is the 'godfather' of the range.

Like the Hummer, that may be part of the Shogun's appeal; on today's mean streets some 'attitude' doesn't goes amiss. Yet check out the pictures and it's essentially a very polished design — finished in the gleaming white of our test car, it's a fashion icon that's come out of left field. A strong chromed grille flanked by deep headlamps leads back to a clean bonnet and a fairly upright screen.

Colour-coded, heavy-duty body cladding fills in along the flanks between flared wheelarches, themselves chock-full of 20-inch alloy wheels shod with meaty 265/50 Yokohama rubber. The neatly finished tail is defined by a large, side-opening tailgate. Tinted and privacy glass delineate the deep glasshouse. It's easy to see why people would want to travel in one of these imposing go-anywhere, do-anything behemoths.

Climb aboard and that feeling is strongly reinforced by the big, well-padded chairs. It's an easy up-and-in with grab handles on the A-pillars making entry even easier — each doorframe also has an overhead grab, just in case, plus the side steps are very usable.

For the driver, the high-riding driving position is perfect, with excellent visibility all-round; one can see to the end of the bonnet — crucial when tackling challenging off-road work. The high-set heated seats are set well above the floor but headroom and legroom are still generous.

The multifunction (voice, phone, cruise control, media, etc) leather-wrapped steering wheel adjusts up/down for rake but not reach — that said, we were all able to set a first class driving position in seconds. The seats are particularly supportive for both your back and lower back, with comfortable bolstering; the driver also benefits from power-adjustable lumbar support.

Appreciated touches include the deep sun visors with extending inner sections to cover the dazzle spot behind the driver's mirror missed by nearly all carmakers — but not Mitsubishi. And the centre armrest with a big, practical storage bin under the padded top that extends forward for comfort without cramping the traditional handbrake, and the pin-sharp 3D navigation mapping.

The fascia is substantial and contributes to the feeling of invincibility you get just sitting in the Shogun. Switchgear and controls are all logically sited with two clear dials either side of a driver's information display dead ahead of the driver. In addition to the usual range, mpg and external temperature data, Shogun drivers can call up a compass as well as check their height above sea level and predict the weather using a barometer.

Well sited vents on the centre stack either side of the seven-inch touchscreen keep you adequately 'aired' while the 860W Rockford Fosgate music centre integrates audio, onboard navigation and other communication systems, as well as delivering in-car entertainment.

The Shogun's rear cabin falls into the 'right royal' category — there's enough headroom in the trademark tall greenhouse to wear a crown and you sit majestically high with imperious views out of the long, deep windows. As at the front, sturdy fixed hand-grips are attached to the B-pillars with overhead grabs although the average person should be able to hop into the back easily enough without using them.

Three adults can travel side-by-side or two can share the comfy armrest (with a pair of pop-up cupholders) and stretch out and chill while entertaining themselves people-watching, playing computer games or catching a DVD on the nine-inch LCD screens on the backs of the front headrests (wirelessly, of course, so as not to disturb the driver) and all the time keeping as cool or as cosy as they desire using the rear cabin's dedicated climate controls.

If it's been a long day and you passengers want to snooze the miles away, no problem; not only do the backrests recline enough to get you totally relaxed, but they recline to the point where they're actually flat enough to sleep on.

Most of the time most owner will use their Shogun in spacious five-seater configuration but if you need to carry an extra body or two then simply fold out the third row of two individual seats (complete with integrated headrests and seatbelts) from the boot floor.

Third row passengers also benefit from roof-mounted vents for the AirCon as well as front-hinged opening side windows. Adults can use them at a pinch although youngsters seem to love sitting there (you wouldn't understand — it's a kid thing). Even with seats 6 and 7 taken, there's still a practical 215 litres of luggage space behind them.

The Shogun's spacious boot is easily accessed via the massive side-hinged (on the driver's side) tailgate; an easy locking stay keeps it open on slopes. There's a sizeable 663 litres for cases or cargo even with five aboard but if you need to move home then fold the 60:40-split second row and the 50:50 split third row and you'll have a cavernous 1,790-litre loadbay.

And in a Shogun you can also pull a braked 3,500kg trailer… or a caravan, power boat, or horse-box across a muddy field. And there's no space wasted on a spare wheel — Yes, the Shogun does have one (essential when you're far from civilisation) but it's mounted externally on the fifth door and is protected by a secure, streamlined colour-coded cover.

With a potential full-load stretching to seven people, the Shogun needs a powerful engine under its bonnet. And it's got one — a 3.2-litre, four-cylinder, direct injection turbodiesel with intercooler that puts out 197bhp and a strapping 325lb ft of torque.

Together they endow the Shogun with all the power it needs to satisfy any workhorse duties. Left to its own devices in Drive, it's an able performer. If you want more control when towing or off-roading (or even around the houses) there's a sequential manual Sports mode.

Flat out it runs to 111mph with the 0-62mph 'dash' done and dusted in 11.1 seconds. Officially the five-speed auto will return 33.2mpg in the Combined Cycle and our week's hard testing saw it post an overall average of 27.8mpg, putting 30+ within reach of ordinary drivers.

For those whose priority is for a 4x4 that's unafraid of getting to grips with the wilderness rather than just clambering over a kerb, and for something with the guts to tow and go just about anywhere its nose is pointed, there really isn't anything like a Shogun.

No doubt why Shoguns are prized by the likes of the emergency and rescue services and many others who depend on being able to operate far from the safety of the tarmac and need to be out and doing in all weathers.

The driver-operated leather-topped transfer shift lever sits alongside the autobox's selector and allows on-the-fly switching at road speeds of up to 60mph between 4H full-time four-wheel drive and 2H rear-wheel drive (fine for urban driving in clear weather and it helps economy some!).

4H delivers full-time all-wheel drive and is the standard operating mode for the Super Select system. On tarmac surfaces, torque is asymmetrically split 33:67 front:rear to cater for a wide range of driving conditions. On wet or low-friction surfaces, up to half the torque can be sent to the front axle for enhanced traction and stability — ideal for driving over packed snow, icy or flat dirt surfaces.

Selecting 4HLc locks up the centre differential so that drive is transmitted through all four wheels to deliver grippy performance when driving in soft snow, sand, dirt or other high-resistance conditions. And in 4LLc (low gear with centre differential lock-up) the Shogun can effectively negotiate rocky terrain or swampy conditions where extra traction is called for.

The Shogun's fully-selectable go-anywhere four-wheel-drive is complemented by 210mm of ground clearance and long-travel off-road suspension that's more than capable of shrugging off the worst shocks away from the blacktop — and as you'd expect, poor road surfaces are given short shrift. It will also wade 700mm deep water, and has Approach, Departure, Ramp Break-over and Climb angles of, respectively, 34.5, 24.5, 22.2 and 45 degrees.

With its authentic all-terrain 4x4 and towing abilities, the 'go anywhere and do anything' seven-seater Shogun will fit your whole family while taking all the stress out of daily driving. Actually it's fun to drive and for the money (Ł28,599 to Ł36,799) it's hard to think of anything that does it better. — MotorBar