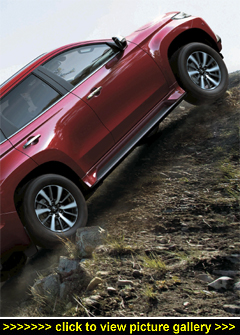 “Mitsubishi’s tough-as-nails Shogun
earned a five-star reputation
for its all-terrain toughness and
reliability, so is their new off-road
flagship — the seven-seater Shogun
Sport — even more  formidable?”

HEADING UP A PACK OF DUAL-PURPOSE Mitsubishis (that includes compact crossovers) the Shogun Sport is the Japanese brand's latest full-size SUV. And when it comes to both off-road ability and lifestyle versatility the Sport is the biz: not only can it accommodate six passengers and a driver but it can haul a braked 3,100kg and confidently tackle all types of tricky terrain.

If you like the cut of its jib, choosing what goes under the Sport's bonnet is a no-brainer because there's just the one engine available — a gutsy 178bhp 2.4-litre all-aluminium turbodiesel; but it's a good one given the muscular 317lb ft of torque it brings to the party. Despite the government's anti-diesel stance (definitely a case of throwing out the baby with the bathwater), diesel still delivers the torque essential for effortless towing and off-roading (and, of course, for hauling around a full complement of passengers).

Mitsubishi has chosen to partner the 2.4 turbodiesel with their new (and exclusive to the Shogun Sport) eight-speed automatic transmission. And while the official Combined Cycle figure is listed at 32.8mpg, our test average came out at a very liveable 37.8mpg — impressive for a large, sturdily built, 4x4 automatic.

Left in auto, the eight-speed autobox is fine but you also have the option of using the column-mounted paddle-shifters behind the wheel or the shift lever to change gear manually whenever you wish (for downhill engine braking or overtaking) either temporarily in Drive or more assertively in Sport Mode manual override. Do either and the gearshifts are positive and immediate. The 2.4 powerplant delivers more than enough oomph and the Sport zips along keenly.

The autobox also benefits from an advanced adaptive control that lets it apply the optimum gearing for different driving situations: Uphill Control (also useful for towing); Downhill Control (to exploit engine braking); Throttle Release Control (upshifting is temporarily prevented when the accelerator pedal is released to provide engine braking plus instant engine response once the throttle is re-applied); and Rapid Kick-down Control.

Swing open a door (front or rear) and you'll find sturdy pillar-mounted grab handles that make it easier to climb aboard; although most people probably won't need them, they're handy to have. The big electrically-adjustable leather-upholstered front seats are both supportive and invitingly padded, and once seated you'll enjoy clear views out.

The driver enjoys a commanding view of the road over the bonnet along with unrestricted visibility all round which makes placing the Sport accurately a breeze; great news on narrow country lanes but even better news when scrambling over rough terrain. The leather-wrapped multifunction (adaptive cruise control, audio system, 360-degree camera, etc) steering wheel is good to hold and paddle shifters for the automatic transmission are mounted on the steering column.

The high and wide centre tunnel console flows up to meet the logically laid-out dash's centrally-mounted seven-inch infotainment touchscreen, creating a cosy twin cockpit ambiance. That noted, there's plenty of inner space to go around, all made even more liveable by soft leather and piano black finishings.

DAB radio and Bluetooth connectivity with music streaming are, of course, standard-fit items but you'll need your smartphone if you want directions because there's no built-in SatNav — instead you get Mitsubishi Motors' Smartphone Link Display Audio infotainment system which supports Apple CarPlay and Android Auto through which you can use voice control or the touchscreen to get traffic-optimised navigation directions, make and receive calls, access text message, and listen to music. Another thing that's different from most other UK market cars are the Sport's column stalks: they're switched — the indicator wand is on the right; and that for the wipers is on the left. Not a problem — you quickly adapt!

'In-flight' storage is also well-specced with a real-world damped and lockable glovebox, long bottle-friendly front door bins, two handy 'pockets' built in either side of the central tunnel, plus dual-usage twin cupholders ahead of the armrest (with a useful box beneath the nicely padded 'lid') between the front seats.

To the above the Ł2K dearer '4' adds heated front seats (two-stage), a 360-degree around-view monitor system (uses four cameras at the front, rear and in the side door mirrors to display a bird's-eye view of the vehicle's perimeter on the touchscreen along with a guideline overlay for reversing), adaptive cruise control, an upgraded sound system with additional tweeters and a 510W amplifier, Forward Collision Mitigation with automatic emergency braking, blind spot warning, and headlamp washers.

The 60:40-split middle row seats are also well padded, comfy and supportive and there's decent foot, knee, and leg room along with a fist of headroom even for taller passengers. A large centre armrest with built-in cupholders drops down between two adults to ringfence their personal 'territory' — reclining backrests and long outer armrests add to the comfort.

Adding to the practicality on offer are large magazine pouches, bottle-holding door bins, and dedicated roof air vents. For owners needing to fit child seats, the outer rears have the necessary Isofix mountings.

Unlike some seven-seaters, the Shogun Sport genuinely welcomes adults to its rearmost pair of seats, where they'll find reclining backrests, decent knee room — and no 'sardining'. Dedicated roof level air vents and armrests with built-in cupholders help keep it all civilised. And kids just love sitting back there.

The Sport rides surprisingly well given its first-class abilities in the rough; there's a multi-link rear suspension set-up to enhance handling and ride, and the dampers have been tuned for comfort. It's predictable and sure-footed on the blacktop, with body lean effectively managed despite the high riding stance, and a decent turning circle (just 11.2 metres — impressive for a vehicle of this size). Show it a motorway and the Sport will show you a composed and relaxing gait that takes the strain out of very long trips.

To provide the toughness essential when venturing far from the beaten track, the Sport makes use of a strong and sturdy body-on-frame construction similar to that found on its stablemate, the L200 pick-up. And while Mitsubishi's Super Select II all-wheel drive makes it unquestionably fit-for-purpose on-road during the snow and ice that paralyses 2WD vehicles each winter, at heart the Shogun Sport is an authentic off-roader.

The Sport's all-wheel drive can be manually engaged by twisting the rotary controller close to the selector lever to either shunt all of the power to the back wheels or to activate full-time four-wheel drive — anytime on the fly, at speeds of up to 62mph. The default 2H mode is for normal driving, with drive going only to the back wheels to reduce fuel consumption and provide the best performance and enjoyable rear-wheel drive handling. Selecting 4H on all surfaces sends drive to all four wheels (split 40:60 front to rear), making it easy for drivers to adapt to changing conditions on the move such as muddy roads or crosswinds when towing.

For the ultimate off-road performance there are two more settings: 4HLc locks the centre differential to provide optimum traction on snow-covered roads or high-drag surfaces such as sand; 4LLc uses lower gears to maximize the levels of traction that can be exploited. When still more traction is needed in either 4HLc or 4LLc the rear differential can be locked via a dashboard button.

Another very useful 'tool' is Terrain Control that, also at the touch of a button, gives the driver a choice of four off-road driving mode settings that deliver maximum traction in mud and snow, gravel, rock, and sand.

Also very important off-road is Hill Descent Control — this maintains a constant speed when travelling down a steep or slippery gradient by controlling vehicle braking. The system operates between the range of 1 and 12mph and is speed adjustable via the brakes or accelerator.

Then there's the 218mm ground clearance, accommodating suspension articulation (which explains the marked clearance between the tops of the tyres and wheelarches), 30-degree approach, 23.1-degree breakover, and 24.2-degree departure angles, and 700mm wading depth perfect for tackling deep fords, rain-lashed trails or flooded country lanes (note that the Sport's front-end had been specifically designed to limit water splash when fording) together add up to unfazed all-terrain ability). All-in-all this new Shogun's all-terrain suite enables the Sport to boldly go off-road.

With all five seats in the first two rows reserved for peeps and seats 6 and 7 folded away flat the boot is perfectly adequate, measuring 502 litres; but fold all the seats in rows two and three and you'll end up with a 1,488-litre loadbay. Admittedly, with seven seats in use there's not much room left over for luggage — 131 litres to be precise; however that's sufficient for several squishy bags. Unexpectedly, beneath the rear boot floor there's a very useful deep, full-width, multi-compartment tray.

Whatever your daily drive throws at you, the genuine seven-seat Shogun Sport will take it all in its capable stride; whether its apocalyptic weather, heavy-duty hauling or multiple-passengering, the multi-tasking Sport won't let you down. ~ MotorBar