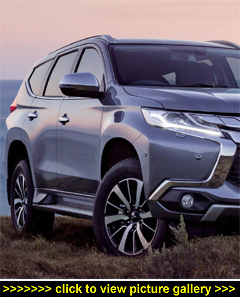 “If tackling tough terrain, laughing
in the face of rogue climate-change
weather, towing seriously heavy gear
or needing six or seven seats, then
Mitsubishi’s Shogun Sport could be
your perfect partner...”

MITSUBISHI'S NEW OFF-ROAD flagship, the Shogun Sport, has been produced for those who need authentic off-road performance and all-terrain surefootedness. And with eighty years' of 4WD know-how under its belt, the Japanese company knows exactly how to come out on top in the worst conditions.

Which is why they've equipped their Shogun Sport with the best hardware to cope including a tough and durable chassis, a four-wheel drive system with a locking centre differential, high and low ratio gear sets, a terrain control system that, at the touch of a button, offers four bespoke off-road driving modes (Gravel, Mud/Snow, Sand, and Rock), a driver-activated rear diff lock, a boulder-clearing ground clearance of 218mm, and a 700mm wading ability. It that lot can't get you through the rough stuff, nothing will!

The sharply-hewn front-end (designed, incidentally, not just to grab attention but also to reduce water splash-over when wading) with its curvy chrome grille bars and combined LED headlamp-and-daytime running light clusters give it enough in the looks department to appeal equally to the school-run brigade alongside seven-seaters from the likes of the Land Rover stable. However, follow a Shogun Sport and you'll instantly identify it by its equally striking vertical design tail-light treatment.

But just because it will plug-the-mud doesn't mean it has to be Mad Max utilitarian on the inside. And it's not. Swing open the driver's door and get yourself up into the elevated cabin (there's a sturdy 'grab' on the A-pillar door frame should you need it). Headroom is extremely generous (two fists' of it), shoulder and elbow room is equally good, there are acres of black leather, and the large front chairs are 2-stage heated and power operated.

The ergonomics are clear and silver trim spreads some glitter round the 'cockpit' style interior that's created by a dash that flows into the centre stack and high central tunnel combined with deep, well-padded seats with comfortably plump bolstering. But it all works well to deliver A1 visibility from the helm that makes placing this 4.8-metre 4x4 a breeze even along narrow country roads and off-road. The big powerfolding door mirrors are welcome too.

The trad-look chrome-rimmed dials are easy-to-read and the 2-zone climate controls foolproof. The wheel is a multifunction four-spoker with a nicely grippy rim and paddle-shifters. Down to your left and close to hand on the wide central tunnel is a short and sturdy selector lever for the autobox; switches for the hill descent and wading mode are a finger's stretch away, as too is the rotary knob for the all-wheel drive. Big siamesed cupholders are, of course, also nearby.

In a big car you expect los of places for stowing your personal bits and bobs; and in the Shogun you get plenty of in-cabin storage including large bottle-holding door bins, a drop-down overhead glasses case, slim pockets both sides of the transmission tunnel, a good-sized lockable glovebox, and a large storage bin under the wide central front armrest.

Some smartphone-savvy drivers prefer using their own navigation apps so some carmakers now no longer offer a built-in SatNav. The Shogun has gone down this route and fits its Smartphone Link Display Audio infotainment system instead of an integrated SatNav. Not a problem as this supports Apple CarPlay and Android Auto for those who wish to link-in and light-up a nav app — such as Waze — to receive traffic-optimised directions (there's accompanying voice control too) as well as to make calls, access text messages, and listen to music.

The infotainment package also brings Bluetooth connectivity with music streaming, a DAB radio, and a Mitsubishi Power Sound System with additional tweeters and a 510W amplifier. The new 'must-haves' — fast-charging USB ports — are also dotted around in the front and rear.

Seating for up to seven means three rows. The middle one gets the lion's share of the room and offers masses of leg- and knee-room; more than enough to jiggle those pins. And thanks to just a blip of a tunnel hump in the floor, passengers occupying the centre spot won't be straddling anything so lots of room for feet too. The wide drop-down centre armrest features the de-rigueur cupholders (individual pop-out items) plus there are overhead air vents, a pair of fast-charge USBs, roomy seatback pouches, entry 'grabs' on the B-pillars, and privacy glass. The nicely plumped seats are also set higher than those in front so good views out both forwards and through the large side glazing.

The 60:40-split seats can be folded down or tumbled forward to increase cargo capacity, or tilted-and-slid to access to the third row (after which they return smoothly to their original setting). Another big plus: the second row's backrests can be individually reclined through 45- and 90-degrees.

As usual, kids seem to love travelling in the third row even if they don't have to. Go figure! Actually, even adults can fit in the Shogun's third row which offers fairly respectable accommodation. The two individual seat bases are angled up for better comfort and there's surprisingly good knee-room and air between heads and the roof lining. And yes, a couple of grown-ups can be shuttled around without sparking a mutiny. Cupholders and overhead air vents are provided plus, especially welcome if you have kids aboard, is a seatbelt-on warning that shows if somebody's not buckled-up.

The Shogun rides well — as it needs to, given that crossing wilder terrain in some 4x4s can be like riding a bucking bronco. Well plumped seats help absorb the worst and the Sport manages to be surprisingly civilised in the rough. On blacktop, body lean is well managed, particularly for a SUV with a high centre of gravity, and you can barrel along without unsettling your passengers. No worries in corners and through the twisties either.

The power steering serves up lighter steering at lower speeds so in urban areas you don't need Popeye-arms to park pretty; you'll also be glad of a tighter turning circle than is the norm for big SUVs like these. Stopping, progressively and without drama, is never a problem thanks to meaty ventilated discs front and rear.

Selected with a twist of the dial located on the centre console, the Shogun's 4WD system offers the choice of four transmission modes: 2H for normal driving and with drive directed to the rear wheels only to favour the fuel consumption; 4H can be engaged on the fly at speeds of up to 62mph on all surfaces and sends drive to all four wheels in a 40:60 front-to-rear torque split; 4HLc locks the centre differential to provide optimum traction on snow-covered roads or high drag surfaces such as sand; and 4LLc uses the lower ratio gear-set to maximise traction (when still more grip is required the rear differential can be locked via a dash button when in 4HLc and 4LLc modes).

There's also Hill Descent Control (maintains a constant speed of between 1 and 12mph when travelling down a steep or slippery gradient) plus a Terrain Control System which offers four off-road driving modes, engaged at the touch of a button. These are Gravel, Mud/Snow, Sand, and Rock. All are intended to maximise traction in extreme situations. Extending its all-terrain capability further is a 218mm ground clearance and Approach, Break-over and Departure angles respectively of 30, 23.1 and 24.2 degrees. Deep fords (or flooded country lanes) can also be confidently tackled courtesy of the Shogun's 700mm wading depth.

While electrified powertrains are relentlessly pushing combustion engines aside, they're still quite a long way from being over-run. For the present the Shogun is continuing with oil-burners on the basis that only diesel can deliver the torque needed to tow, ramble off-road or carry six passengers and their driver.

Consequently, under the bonnet sits a turboed 2.4-litre all-aluminium diesel unit kicking out 178bhp and a muscular 317lb ft of torque. It's partnered with an all-new eight-speed automatic transmission with a spread of closely-stacked ratios. That's enough to zip up to motorway cruising speeds without really noticing (top speed is 112mph; and zero to 62mph comes in at 11 seconds).

The autobox shifts pretty fluently but if you want extra control and more immediate responses you can select Sport Mode: do so and, using either the selector lever or the column-mounted paddle-shifters, you can change gears as you wish for punchier on-road performance, downhill engine braking, or a spot of purposeful overtaking. Officially the Shogun will return 32.8mpg but despite some hard driving our week's average came out at 34.9mpg — very liveable given its size, spec and capabilities.

With the front two rows seating people, the boot will accommodate 502 litres of luggage — that's more than enough to pack a family's holiday luggage. Fold down all five rearmost seats and the resulting tall, long and completely flat-floored loadbay stretches to 1,488 litres. For the record, with all seven seats in place there's still some room (131 litres) plus an under-floor locker easily accessible with seats six and seven in use. The Shogun Sport also offers a notable towing capacity of a braked 3,100kg; top-of-the-class for seven-seater SUVs. And it says a lot about its hauling abilities that nine out of ten Shogun owners specify towbars.

As with all cars, the Shogun Sport tends to attract owners attuned to its core skills set — and who intend to make maximum use of them. So, if rugged on the underside and shiny and granite-hewn on the outside is the mix for you, you'll also be delighted with its abilities to carry six passengers, haul sizeable loads (even off-road), face down floods and blizzards, and keep calm and carry on far from the beaten track. Fit for purpose? You betcha! ~ MotorBar