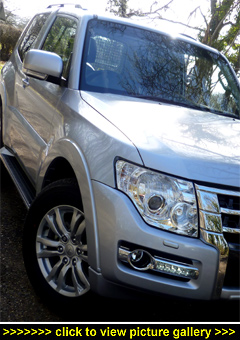 “Size isn’t always everything,
especially when it comes to a set
of wheels that will take you most
places on and off the beaten track;
places that could quite likely be
starred on your bucket list...”

FOR THOSE FREE-SPIRITED TGIF-ers fortunate enough to be able to sling their gear in the back of their car every Friday after work and take off for the hills or to hit the waves, a set of wheels with plenty of manned-up space to stow their gear is de rigueur.

You may be thinking Jeep Renegade or crossover here, but what makes an even better rootin', tootin' 4WD carryall is Mitsubishi's square-jawed, short-wheelbase, three-door Shogun. While it's available in the indisputably macho Barbarian trim rolling on snazzy 20-inch alloys, the one to take into the wild is the stripped-out Commercial version.

Don't panic. When we say 'stripped out' we don't mean literally, like a club racer. What's gone is the second row of seats which still leaves the two up front — one for you and one for your best friend (two-legged or four).

Which means plenty of room behind for 'stuff'. The large cargo space is separated from the main cabin by a steel mesh grille. Access is through the full-width side-hinged tailgate; and it couldn't be better because it's hinged on the offside and opens to almost ninety degrees. Plus the load sill is back-friendly — just above knee height. A foolproof lock clip ensures it can't slam back on you even on very steep slopes or windy days.

A full-size spare — absolutely essential if you're going places even Green Flag won't go — is mounted on the outside of the tailgate but set low so there's no restriction of the view behind though the large rear screen. A colour-coded hard cover keeps it all looking neat plus it'll still be there when you return — wheel thieves won't be able to get it off because the spare wheel has to be released from inside.

The cabin is spacious and the chairs welcoming with plenty of shoulder room — the gulf between the seats' inner edges is about ten inches — and long outer armrests. They're also well shaped with just enough side bolstering to enhance comfort rather than hinder it. A wide, padded slide-adjustable centre armrest adds to the comfort as does the fabric upholstery that will help you stay cool and dry on sticky summer days and cosy on icy winter mornings.

Entry — keyless — is easy through the big doors. Side steps make it even more accessible, as do the substantial grab handles on the A-pillars and overhead. Once in you sit high and enjoy A1 visibility over the bonnet, to the sides and through the tailgate's rear screen.

You do, however, have to adjust to the lack of rear three-quarter views as the Commercial SWB comes with blackout glass instead of the lightly tinted rear side windows you'll find in the Warrior and Barbarian versions. However, there is a plus side: nobody will see what it is you're carrying through them. The doors mirrors are helpfully large and, to a degree, cover the blind spot

The smooth leather-wrapped wheel is good to grip and even with four spokes looks sporty; remote buttons on the horizontal spokes control the audio and cruise. Although it only adjusts for height there's enough manual seat adjustment (the driver gets front and rear seat base height adjustment) to set a decent driving position.

Big boots? Not a problem — the footwell is roomy enough for size elevens and includes a decent rest for your left foot. And don't worry about mud — the floor is protected by tough 'n' tailored rubber mats.

You'll find a USB connection in the lit and lockable glovebox along with a dedicated compartment for a small USB device and 12v sockets in the storage box under the centre armrest as well as on the centre stack. You can also take for granted twin cupholders, a drop-down glasses case, and a CD/radio unit.

A driver information display is sited top-dead-centre of the deep fascia and shows all the essentials: average mpg, range, and outside temp, along with elevation and barometer readings. Also appreciated is the illuminated keyhole on the steering column and the standard-fit tyre pressure monitoring system.

The two major dials are each housed in their own nacelle: the speedo incorporates the fuel gauge; the rev-counter also shows the coolant temperature as well as the currently engaged gear (D, M1, M2, etc). Between them is a graphic indicating the active drive mode (2H, 4H, etc). Sticking with tradition, the handbrake is the kind still favoured by most drivers — a smooth-action pull-up lever.

One-shot power windows and on-demand powerfold and heated door mirrors are also standard, as too is a fast-acting automatic climate control system (with easy-to-operate rotary controls) and quick-warming, two-stage heated seats, so you're covered whether it snows or shines.

If it's the former then the Shogun's tough and authentic all-wheel drive system is there for you. Switching from two- to four-wheel drive (or vice-versa) on-road can be done on the fly — just move the smaller transfer box lever (alongside the auto's leather-topped selector). For more dire conditions and challenging terrain the same lever can engage either 4HLc (locks up the centre differential) or 4LLC. In 4LLC — for extreme low-ratio off-road work, be it rocky terrain or swampy conditions — there's not much the SWB Shogun won't take a run at, clamber over (210mm ground clearance) or ford through (700mm wading depth).

Back on the blacktop it's equally at home. The 3.2-litre turboed and intercooled four-pot diesel's hefty 325lb ft of torque — so crucial off-road — is put to good use in more civilised surroundings. Along with 197bhp, it's all you need to cruise mean city streets. The autobox offers a traditional P-R-N-D gate along with a 'Sports Mode'.

If you want a bit more vim then just flick the selector to the left out of Drive for sequential manual shifting that puts control totally in your left hand.

This also comes in useful when you're towing — a task the three-door Shogun is also happy to perform up to a limit of 3,000kg braked. Along with the selectable four-wheel drive, there's also traction and stability control systems fitted as standard to keep things shipshape, particularly when pulling a trailer or horsebox.

The elevated driving position makes the Shogun easy to place accurately on the road (and, more importantly, off it!) and if you were expecting a rough ride, well, you'll be disappointed — this SWB version is as much at ease on tarmac as it is on tundra.

It's also quiet at speed and has an easygoing gait on motorways where it runs true and feels stable even on windy days. It also brakes well, steers well (a power-assisted rack-and-pinion steering set-up), and is reassuringly predictable.

Officially it will average 34.4mpg with 28.2 and 39.2mpg respectively for Town and Touring. In the real world most owners should be confident of matching our hard driven 32.1mpg average.

While the family-sized five-door seven-seater 4WD Shoguns can be most things to most customers, the breed's three-door versions continue to provide a competent off-road-capable go-anywhere solution for more demanding crossover fans who want substantially more than just socially acceptable SUV looks and LED running lights from their 4WD — MotorBar.