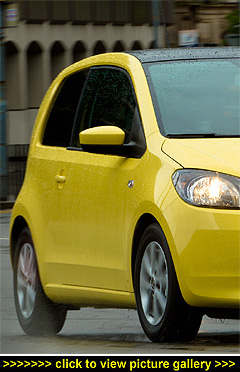 “If VW has the Up, does that make
Skoda’s version Down? It certainly
does in terms of price — the cheapest
Citigo costs È365 less than the VW
Up. But will the baby Skoda also be
‘down’ with city car buyers?”

LET'S BE HONEST: given the choice most buyers will buy a VW rather than a Skoda. Since the VW Up is almost exactly the same car as the new Citigo, the Skoda's main appeal to buyers comes down to this — price. With the base 59bhp S model starting at È7,630, the Citigo is certainly great value — indeed, it's one of the cheapest new cars on the market and, crucially, is È365 cheaper than the Up.

The comparison with the VW (and indeed SEAT's forthcoming Mii) is inevitable. There are a few differences, but they might be decisive. Mechanically they're all but identical. The Skoda has different (and rather less funky) styling both front and rear. The cabin has the same layout, too, with only a few differences in trim and materials. Overall, it must be said, the effect is slightly more dowdy and down-market than the Up.

Skoda boasts that the Citigo has the longest wheelbase in the city car sector. Should you care? Well, it does make for an exceptionally comfortable ride, coping superbly with speed humps and potholes. It also makes the Citigo very stable in a straight line.

The steering is precise and very light in feel — ideal for a city car, if not the last word in sportiness. Speaking of sporty behaviour, the Citigo corners well enough, though understeer always threatens to scrub off excess speed.

Another benefit of the Citigo's long wheelbase is generous cabin space. The doors are massive for such a small car, which could prove awkward in tight parking spots, but they do open up on to a surprisingly capacious amount of space for a car that measures a measly 3.5m from stem to stern. Four adults (this is a strict four-seater car) should find things fairly comfortable; even six-footers should have enough headroom and shoulder room in the back seats, although legroom is a bit tighter.

Open the Toyota Aygo-style glass tailgate and you're greeted by one of the biggest boots in the city car class. There's a movable boot floor, which when you drop it down opens up 251 litres of space. Fold the rear seats and that grows to a remarkable 951 litres (959 on the 5-dr models), with a two-metre-long load length too.

The steering wheel adjusts for height (though not for reach) and the pedals and gear lever are well positioned. Visibility is pretty good all round, with the exception of thick front screen pillars.

So what about engines? You can pick from either a 59bhp or a 73bhp 1.0-litre three-cylinder petrol unit. Neither is what you'd call quick (0-62mph in 13.2 seconds in the quickest version) but for city use they're fine. If you ever need to venture out of town, the 73bhp version is definitely preferable.

Neither are they particularly refined. Any throttle pressure at all produces a lazy rasp from the engine bay; however, at cruising speeds and a light throttle, it's not too bad. A five-speed manual transmission is standard but ASG automatic transmission (something that VW doesn't offer on the Up at present) is optional at È565. A five-door Citigo arrives later this year and, despite a È350 premium over the three-door, it's expected to take 60% of sales.

The base-model S version will only account for one in ten Citigo sales. UK buyers have always preferred higher-spec models, and there will be a pretty even split between plusher SE and top-spec Elegance versions.

One of the most appealing things about the Citigo is its PID (that's portable infotainment device) — a five-inch detachable touchscreen which combines SatNav with phone connection, car info and a media player. It's a brilliant device that's bound to have huge showroom appeal and it's standard on the top model, optional on the others.

Running costs should be ultra-low. Insurance groups are either 1 or 2, depending on model, and depreciation is predicted to be excellent — after three years and 30,000 miles, the Citigo should be worth around 50% of its purchase price.

Fuel economy is also thrifty — the official figure is 62.8mpg for the manual-gearbox 59bhp model. You can get even better than that with GreenTech, which is available on SE and Elegance models. For an extra È360, it adds stop-start, battery regeneration and low rolling resistance tyres to improve fuel consumption to as much as 68.9mpg, while CO2 emissions plunge as low as 96g/km, meaning you have free car tax, too.

So, is the Citigo the best city car you can buy? Very probably, although I strongly suspect that buyers are more likely to choose that alluringly Volkswagen-badged alternative. — Chris Rees