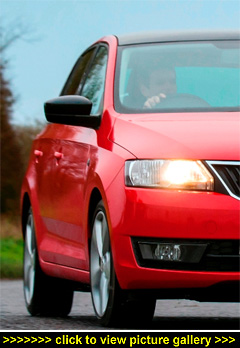 “Exactly one year ago Skoda
introduced the Rapid four-door,
five-seater compact saloon
designed to give class-leading
rear seat passenger legroom but
still with a large boot. On sale in
the UK from January 2014, the
new Rapid Spaceback is a genuine
five-door family hatchback with
a proper tailgate...”

ADDING THE WORD 'SPACE' to the newcomer's badge would suggest this new Rapid variant is even roomier than the original Rapid saloon. Not so, because the Spaceback is actually a few millimetres shorter than the saloon which is why it offers 415 litres of boot space instead of the saloon's 550 litres.

With the rear seats folded the Spaceback has 1,380 litres of space against the Rapid saloon's 1,490 litres. According to one of the car's designers attending the UK media launch, the word 'Space' refers to the extra 'spaciousness' provided for rear seat passengers by the extended roofline and larger rear side windows. Right. Got it.

Prices for the Rapid Spaceback start from £14,340 and rise to £18,900. Although offering less load space, rather confusingly these prices are around £450 to £650 more than for the slightly larger Rapid saloon.

Sam Ashworth, Skoda's UK's product manager, explained this by saying the Spaceback has different levels of specification, some different engine power outputs, and a wider range of options.

She also said that Skoda expect to sell around 8,000 Spacebacks in the UK in 2014 plus about 4,000 of the 'original' Rapid saloons. The most popular Spaceback version is expected to be the 88bhp (90PS) 1.6 TDI turbodiesel with SE trim priced at £17,280. The next most popular model will be the 84bhp 1.2 TSI turbocharged petrol unit, again with SE spec, and priced at £15,480 which will appeal to 24% of Spaceback customers.

I have just driven the 88bhp 1.6 TDI SE Sportback as it is forecast to be the best-selling version despite it being £1,800 more expensive than the 84bhp 1.2 TSI SE model which, for retail customers, I think would be the better choice.

With the 1.6 diesel having CO2 emissions of 114g/km and the 1.2 petrol emitting 119g/km, they both fall into the £0 cost first year road band; for year two onwards road tax only goes up to £30 per year. For company car drivers the petrol engine actually incurs less BIK tax (15%) compared to the diesel, which is rated at 17% because of the extra 3% tax levy on diesel.

As for fuel economy, the petrol unit will return 55.4mpg in the official Combined Cycle (45.4mpg on test), whilst the four-cylinder 1.6-litre direct injection turbodiesel will return 64.2mpg although only 49.4mpg on my test covering the same route.

The petrol unit was quieter, nippier and more responsive although the performance figures are much the same; around 113mph with zero to 62mph taking around 11.9 seconds.

High-mileage customers should go the diesel route; lower mileage users should take the petrol engine. The cheaper cost of unleaded combined with the lower purchase price of the 84bhp 1.2 petrol-engined model makes the 1.2 TSI the best option for most retail buyers.

In terms of handling sophistication or ride comfort the Rapid Spaceback doesn't match the VW Golf or Ford Focus — but it's not far behind. I drove one version on the standard 15-inch alloy wheels and the ride was more compliant and less noisy than the model I tried with the optional 17-inch wheels. So my advice is to stay with the standard 15-inch ones but instead pay £300 extra for the more supportive, larger sports front seats.

Where the Rapid Spaceback does score strongly over the Golf and Focus is in having more rear seat legroom. In fact, in this area it scores over all the other cars in its class. That noted, it's disappointing that the Spaceback doesn't fully live up to its name by offering more load carrying space over the standard Rapid saloon, although the Spaceback is actually best in its own hatchback class.

Against? The rear seatbacks do not fold completely flat for ease of loading long items, it's not as spacious for load carrying as its Rapid saloon sibling, the standard front seats feel small so the sports seat option (£300) is recommended, there's some cheap feeling plastic trim, and the optional larger wheels give a harsher ride.

However, plus points are good and include class-leading load space, a wide range of engine options, and the range is well equipped and attractively priced. And, just like it says on the tin, the Spaceback is spacious for passengers. — David Miles