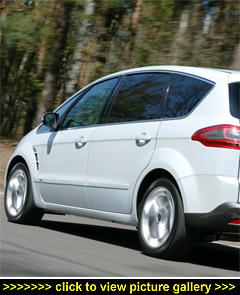 “The most significant thing about
the new 2010 S-Max 7-seat sporty
people carrier is not the many styling
changes, better levels of equipment
and classier looks but the new
Blue Tag lower pricing policy which
means good news for buyers...”

PRICES ARE REDUCED BY 10 to 12 per cent over the outgoing model bringing Ford's official prices down in line with the actual transaction costs being promoted by dealers and so clearing up the confusion on what the real price is — prices now start at Ł20,645 and range up to Ł29,495.

Although currently 94 per cent of S-Max models sold in the UK are diesel powered, Ford expects the petrol engine share to increase because of the introduction of their new 200bhp 2.0-litre EcoBoost direct injection turbocharged unit.

Having driven the first left-hand drive S-Max versions earlier this year it's now time to see if the new model impressed on UK roads — and they impress more now we know the lower pricing structure.

In addition, the new S-Max has the first application in a larger vehicle of Ford's twin-clutch PowerShift automatic transmission which comes as standard with the new EcoBoost petrol engine and is optional on the 2.0-litre 138/160bhp turbodiesel units. Around 50 per cent of people-carrier users and retail customers in the UK choose the automatic transmission option. The seven-seat S-Max is not, at least according to Ford, an MPV even though it carries up to seven people in three rows of seats. It is apparently an extension of the Mondeo family even though it shares the same platform with the seven-seat Galaxy which is… an MPV! However, S-Max is designed to look and feel sporty and be fun to drive and, in styling terms, certainly doesn't shout 'family bus'.

As for the other changes for the new 2010 model year car, the S-Max gains from Ford's on-going plan to give all their models a more premium look and feel and that has been achieved. There is the choice of Zetec, Titanium and Titanium X Sport trim levels, with Titanium taking 60 per cent of sales followed by 30 per cent for Zetec.

Inside, the S-Max benefits from Ford's 'fold flat' seating system for the second and third rows of seats while high series models get a panoramic sunroof, power blinds, LED interior lighting and a premium sound system. And all UK models now have ESP electronic handling programme as standard.

Handling remains sharp, precise and agile and copes with our poor UK road surfaces really very well. However, the larger the wheel size, the more road noise is evident inside the vehicle; 16-inch are best, 17-inch are okay but the 18-inch wheels are too noisy.

The new 2.0-litre, 200bhp EcoBoost petrol engine, with direct injection and turbocharger, is impressive: 221lb ft of torque from 1,750rpm gives it 'turbodiesel' responsiveness and, on my twin-clutch automatic test car, 27mpg. The reduced CO2 emissions over the outgoing 158bhp 2.3-litre petrol unit has reduced by a significant 19% (to 189g/km) even though it has over 25 per cent more power. This translates into an official combined cycle fuel consumption of 34.8mpg.

That noted, most customers will still choose diesel power and there are 2.0-litre engine options with 113, 138 and 160bhp outputs as well as a 2.2-litre 172bhp unit although not all engines are available with all levels of specification.

In its favour the new S-Max has lower pricing, is refined and fun to drive with smarter new looks, offers versatile seven-seat/load carrying layout (285-2,000 litres), a higher quality specification, a wide range of engine options and a seamless-shifting six-speed twin-clutch auto gearbox. Against is the road noise intrusion from the larger wheels and limited headroom in the rear row of two seats.

The performance results detailed below are from my test drive of the best-selling 138bhp (140PS) turbodiesel, which is just about the right unit for most people. — David Miles