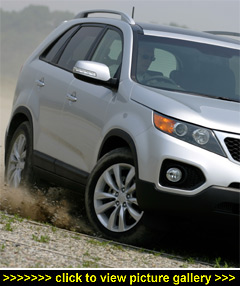 “Kia’s new Sorento owes much to
the changing face of lifestyle all-wheel
drive buyers — as the macho 4x4s
fade away to be replaced by sleeker-
looking, urbanised family-friendly
vehicles, the new-style 4x4s are
increasingly being driven by women;
particularly well-off, younger
women...”

THE RESULT IS less focus on out-and-out ruggedness and go-anywhere ability and more in the way of design, refinement and real-world practicality — seven seats, for instance. Run your eye over the Sorento's distinctive lines — the trapezoid C-pillars and 'wedge' profile — and it's no surprise to learn that Kia's all-new family-focused SUV was styled in a Californian design studio.

On first sight the Sorento's 'softer' looks are well matched to the cityscapes that will no doubt form the backdrops for the majority of them. There's still just a hint of rough 'n' tough — despite wearing chunky 18-inch alloys, there's room to spare in the accentuated wheel aches.

But that's where, visually at least, it ends. Like many SUVs sporting premium badges, the Sorento's not a serious off-roader in the mould of, say, a Land Rover Defender; but then it doesn't need, or want, to be.

Like many similar vehicles, the Sorento runs in two-wheel drive most of the time to save fuel, automatically switching to all-wheel drive only when the front wheels lose traction.

However, the centre differential can be locked at any time to keep the front-to-rear torque split at 50:50 for extreme conditions.

This split is maintained up to a speed of 19mph (at which point it is automatically disabled until speed falls back below 19mph) so it's ideal for deep snow or tricky forest trials.

In addition to Electronic Stability Control there's also Downhill Brake Control to maintain a steady speed of 5mph on steep descents. And a Hill-start Assist Control that helps to prevent wheel spin or roll-back when pulling away on steep or greasy slopes.

However, the 'new' in 'all-new Sorento' refers to more than just the lower, longer and smarter body style fronted by a new variation of Kia's 'tiger nose' grille. It also refers to the new state-of-the-art 2.2-litre diesel engine and new six-speed automatic transmission of Kia's own design (it's the most compact six-speed unit currently available anywhere in the world) that's smaller, lighter and more efficient and which boosts fuel consumption by up to 12 per cent. The third major improvement, based on the idea that families can never have too much room, is seating for seven as standard.

Where to begin? Under the clamshell bonnet is as good a place as any. The four-cylinder 2,199cc turbodiesel outperforms most four-pot and many V6 diesel units from rival brands. Extracting 194bhp is pretty good going from this hi-tech, smaller-capacity turbodiesel; even more impressive is the 311lb ft of torque, on tap from 1,800rpm. All that torque also comes in useful in another key lifestyle area: towing — trailers, boats, caravans, etc, you name it and up to 2,500kg (braked) the Sorento will pull it.

The new auto 'box is well-matched to the engine's power and torque bands — shifts are seamless; press on and it surges satisfyingly through the gears. There's also a sport mode and you can, if you wish, make sequential changes up or down using the selector lever. Cruising is relaxed, helped by 70mph calling for just 2,000rpm in top gear.

Given the strong power outputs, it's no surprise that the new 2.2 Sorento goes pretty well: 10 seconds is all it needs to sprint from rest to the benchmark 62mph.

Work it hard and, like most high-output small-capacity diesels, the 2.2 unit makes itself known but the moment you lift off or reach a steady speed, mechanical noise dies away. As you rarely need to work it hard, for most of the time it remains pretty quiet.

As mentioned, a seven-seat configuration is standard although a five-seat option is available but many buyers clearly favour the flexibility the MPV-like seven-seat arrangement provides — even if for most of the time the 50:50-split third row is folded into the floor to maximise boot space; in this format, boot capacity is 516 litres. Talking of boot space, there's a secure luggage box under the floor and a full-size spare wheel — and it's a proper matching alloy.

Working from back to front, the higher-set, third row seats are easily called up: a quick pull on a strap and they spring up from the floor. The Sorento is a genuine seven-seater but while the rear pair are comfortable they're best restricted to shorter adults and children. Even with them in use there's still a handy 111 litres behind the seatbacks for bags, shopping or family 'stuff'. Incidentally, the outer nearside centre row seat double folds for easy access to these rearmost two.

The centre row, also set higher than the front row, has ample room for three sitting side-by-side (there's more shoulder room, and headroom and legroom are up by 64mm and 102mm on the previous model). The 60:40-split middle row seats — each with adjustable reclining backrests that can be set all the way to 45 degrees for passengers in need of a snooze — double fold to create a cargo hold of 1,525 litres that can easily accommodate extra-long loads. For those travelling in the centre row there's generous foot room under the front seats; even the 'piggy in the middle' has plenty thanks to the very low transmission tunnel. Well-padded outer armrests all help to make travelling that much more enjoyable.

Glazed areas are large so the cabin feels nice and airy even when all the seats are taken. Adding to the pleasant atmosphere is a two-part glass roof. The rear section is fixed while the front section is powered (one-shot operation) and can be tilted for ventilation or slid fully back. Multi-position blinds let the passengers decide on how much shade they want.

With its shapely, well-padded leather chairs — very good back and shoulder support; and comfortable from the moment you first sit in them right up until you leave — set well off the floor, the front cabin is a pleasant place to travel, whether you've got the helm or are just being passengered.

The Sorento provides its driver with a comfortable 8-way, power-operated seat, a belt that adjusts for height, a wheel that adjusts for rake and reach and a driving position with a commanding view of the road ahead. Visibility is good in all directions, even through the rear screen. The footwell is large enough for driving with your hiking boots on, and the left foot rest is restful. Also contributing to the Sorento's 'here to serve you' character is 'smart' keyless entry and push-button, start-stop ignition.

The four-spoke steering is leather-wrapped and feels right in your hands. Lower spokes have a metallic-effect finish while the horizontal bars house the remote cruise control and audio buttons. A nice change, too, to find a horn with a note that commands respect. Through the wheel are reflection-free dials with clear, white-illuminated graphics. Not everybody likes them, but the American-style foot-operated parking brake (push on-push off) didn't cause us any problems — but you can forget Miami Vice-style J-turns!

There's a 'clean' fascia with metallic accents that match those on the door cappings but the heart of the interior is the tall, neatly-ordered centre stack with three distinct levels and displays, all backlit in red lighting, separated by rows of large, logically arranged switchgear. Build quality is good and the trim feels sturdy enough to shrug off wear and tear from kids, dogs and all the other perils of family life. And you'll be hard pressed to fill all the cabin storage spaces, from the large lockable glovebox to the massive bin under the centre front armrest.

There are a lot of thoughtful touches — the rear parking camera's colour display; stay-where-they're-put sun visors that have extending sides to cover the usually missed sections either side of the rear-view mirror; the glowing red 'Sorento' door sill kick plates; and the red LED mood lighting that's particularly effective at night.

Even the wipers deserve a mention: they're quiet and clear a lot of screen, right to the top and all the way to the edge on the driver's side. It's these little extra touches that make a car that more satisfying to live with.

Note that SatNav is not an option on the KX-3 or lesser models. However, a touchscreen navigation system will be fitted to 'KX-3 SatNav' models, available from January 2011.

Safety kit is also good: front-seat occupants are protected by front and front side airbags with curtain airbags running the full length of the cabin. ABS with Brake Assist and traction control are standard, as too are active front headrests. All-weather safety is ably covered by the on-demand four-wheel drive. The Sorento also scored a maximum five-star rating in the EuroNCAP crash tests. Family drivers will also appreciate the automatic drive-away central locking.

Sitting in the Sorento you realise that it is indeed a big car. But thanks to the good visibility, it's also an easy car to place on the road. Helped by the fact that it's so undemanding to drive. The speed-sensitive steering is precise and the Sedona goes where you point it. It also stops exceedingly well: a progressive pedal and reassuring bite from the discs can be taken for granted.

Up the pace somewhat, particularly along country roads, and you'll be more aware of the Sorento's bulk. However the grip is good, the ride's well controlled and it handles competently with a decent balance to it. The ride is noticeably good on motorways, which are cruised smoothly and in a civilised, mile-eating manner.

The all-new Sorento definitely has a lot going for it. It's a good-looker and undeniably fit for purpose as both a load-lugger and versatile seven-seat family charabanc and comes well specced and with enough all-wheel drive ability to keep you going in all weather conditions — enough, too, for some recreational off-the-beaten-track exploring without incurring the downsides of a full-blown 4x4. Add to that a 5-star EuroNCAP safety rating, decent fuel economy and Kia's unrivalled seven-year / 100,000-mile transferable warranty and it's definitely a player. — MotorBar