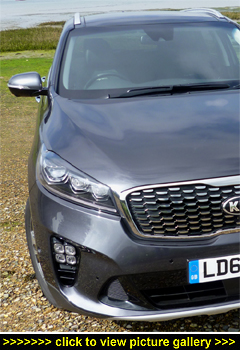 “Kia’s Sorento covers all the
numbers that matter to SUV fans:
it has four-wheel drive; five doors;
and sixth and seventh seats.
Better still, the numbers making up
its price are much more affordable
than many of its competitors...”

WITH PRICES KICKING OFF from Ł29K, Kia's flagship sports utility makes prestige rivals seem overpriced — and for those with a big family or the need for a cavernous hold, it's impossible to ignore. Further boosting appeal are two new range-topping 'GT' versions; the GT-Line and GT-Line S. Sharper looking, they come with cosmetic enhancements including 19-inch alloys, red brake callipers, 'ice cube' fog lights, twin tailpipes, and stainless-steel side steps, plus a new smooth-shifting eight-speed automatic transmission.

Whichever spec Sorento you're planning to splash the cash on (you could spend as little as Ł29K or splurge Ł42K for the top GT-Line S) your money will buy you the same muscular engine — a 197bhp 2.2-litre turbodiesel with a stump-pulling 325lb ft of torque. The real surprise with this unit is its near-40mpg real-life average fuel economy — with all-wheel drive, automatic transmission and a two-tonne 4.8-metre long, generously kitted-out seven-seater body, that's pretty damn good.

While Kia doesn't ask you to pay a premium price for a Sorento they still give you premium looks at no extra cost. Fronted by a striking 'hot-stamped' upright version of the brand's trademark tiger-nose grille and slim swept back headlamp units cut into a profiled bonnet and a lower grille bookended by clustered 'ice-cube' LED fog lights, and topped off by a long, elegant glasshouse, the Sorento has real physical presence — you certainly won't have any trouble spotting it in a car park.

Getting on for five metres long, the Sorento is a bit of a behemoth — in the nicest possible way! — and stands purposefully high off the ground, but it is incredibility easy to get in to and get out again; the seat bases are the perfect height off the ground to simply perch on and swing in your legs with minimal physical exertion.

The Sorento's cabin is big on space, big on quality and big on equipment. The chairs, with plenty of surrounding space, are first-rate; deeply-padded with cosseting bolstering and ventilated leather trimmed with contrasting piping, they're supportive wherever they touch your body.

Three-stage seat heating and three-stage cooling is standard, and it's fast and effective, and both front seats are power-operated: 10-way for the driver (includes 4-way lumbar and a two-setting seat/mirror memory recall); 8-way for the front passenger (with 2-way lumbar). The comfort shouldn't be underestimated — even stocky six-foot adults will feel they're sitting in first class.

The driving position is as commanding as they come and making life even smoother is the easy-entry feature that power-slides the driver's seat forward to your personalised position after you initially settle in and back a ways when you turn off the engine for an easier exit. Visibility is first class; from behind the heated, four-spoke multifunction wheel with perforated leather-wrapped rim, the Sorento is satisfyingly easy to place accurately whether you're in packed town traffic or driving down narrow country lanes.

One of the roomiest cars in its class, the Sorento's airy cabin ambiance is satisfyingly upscale with plenty of soft-touch trim materials and everything in its proper place; lots of storage means a place for everything too.

An eight-inch infotainment touchscreen sits top dead centre of the dash; navigation (with full postcode destination input) is foolproof thanks to utterly reliable spoken directions that, importantly, are given in good time for the driver to process and act upon. Also much appreciated are the pin-sharp 3D maps and crystal clear motorway junction graphics. True to say that U-turns hardly ever happen in a Kia!

Tapping screen icons is not always easy on the go so there are 'hard' jump keys either side of the display that will take you direct to specific menus in less time. Views from the parking camera are seen on the infotainment screen and you can also take for granted a 10-speaker harman/kardon premium sound system, DAB digital radio, Bluetooth with music streaming, and USB and AUX connections, as well as smartphone mirroring via Apple CarPlay and Android Auto with voice control.

While droves of drivers have adapted to pure fingertip control, many still prefer to use their digits to operate physical rather than virtual controls for the climate system — and it's they who will be delighted to find, immediately below the touchscreen (and high enough to require only the briefest glance whilst driving) a three-dimensional control panel for the automatic dual-zone climate system.

Switchgear is tactile, the main dials are traditional über-clear white-on-black items separated by a seven-inch LCD driver's information panel (a large digital road speed figure is one of many readouts), and it's an easy glance to your left to take in the touchscreen which, conveniently, is set at the same height.

Kia's 2.2-litre turbodiesel is a fine choice for a full-size SUV — not so big that it guzzles fuel, and lively enough to ensure wafting through rush-hour traffic is always a breeze. Hooked up to the eight-speed torque converter-based autobox (also used in Kia's hard-charging Stinger sport GT models), there's always plenty of 'surge' on call from the 325lb ft reservoir of torque without hitting the high revs; put the pedal to the metal and this beefy seven-seater will readily post a 9.1-second 0-60mph time. Along with paddle-shifters for some DIY shifting, Kia's Drive Mode Select system lets you switch between four different driving programmes whenever you wish: choose from Smart, Sport, Comfort, and Eco.

You never really notice the eight-speed autobox shifting gears and driving the Sorento is quietly gratifying, particularly when loping along at motorway speeds when you'll barely hear the turbodiesel working — even when pushed (something you rarely need to do), it sings with a likeable gravel-throated warble. Also operating virtually unnoticed in the background is an economy-boosting stop-start system.

A demanding week's driving on a mix of roads including traffic-choked towns and time-tight cross-country runs saw an overall average of 37.1mpg recorded — officially the combined figure is 43.5mpg, with 47.1mpg for what, before the EU had its say, was more accurately know as 'touring'. Exercise a lighter right foot than our testers and you could see closer to 50mpg.

The overwhelming sensation you get riding in the Sorento is a feeling of security. It feels big and tough and even on windy motorways and driving through torrential rain it feels totally planted. The handling is reassuring and predictable, the all-disc brakes quick to take down your speed, it rides level, and the steering is adequately weighted and precise. The result is a hassle-free drive whether you're chauffeuring the family to their summer staycation, commuting solo or towing a boat.

The 4WD drive system is paired with Kia's Advanced Traction Cornering Control and in general use the intelligent electronically-controlled all-wheel drive delivers maximum driving torque to the front wheels but the moment road conditions deteriorate, or to enhance cornering stability, it can adjust this up to a maximum 60:40 front-to-rear.

And it's not just tough in the city — off-road it's more than ready to rumble in the jungle thanks to 185 millimetres of ground clearance and a suspension set-up man enough to tackle demanding cross-country terrain aided by approach and departure angles of, respectively, 16.9 and 21 degrees, plus a ramp angle of 18 degrees, and a driver- selectable Lock mode that maintains the torque-split at 50:50 to maximise traction on especially slippery surfaces until you decide otherwise.

Unlike some SUVs, the Sorento is one of the big boys and made for much more than just bumping up city kerbs to park. Incidentally, running over blacktop, the suspension smoothes out ripples and potholes to serve up a compliant ride; bumps really don't trouble it or its passengers, and usually tiresome long-haul journeys are something to look forward to courtesy of the laid-back ride.

The other major benefit of the Sorento's torquey engine and autobox paired with all-wheel drive is, of course, towing ability — it's more than capable of hauling a braked 2,000kg, all made more predictable, and safer, by the standard-fit self-levelling suspension and Trailer Stability Assist.

If you're not travelling up front you've got it made because the second-row offers limo-like seating, a fist of air above your head and room to truly stretch those shanks. If you're sharing with one other you can totally lounge, arms supported by a wide, comfy central armrest and an equally soft outer one on the door. Depending on how chilled you wish to be, you can tilt your backrest by as much as 45-degrees.

Furthermore, you'll benefit from a heated seat, dedicated air vents, and 12v and USB charging ports, and can store your drinks bottle in the door bin or park your espresso takeout in the cupholder. And if the sun's too bright or there are paparazzi about, you can raise your side window blind. If you must share with two others, the completely flat floor and no central tunnel means decent room for both yours and your neighbour's feet.

Seats six and seven pull up out of the boot floor and lock into place whenever needed — head and leg room are okay for adults but it's younger bloods who seem to rate travelling at the back most highly. And why not — the third row gets its own AirCon, storage and cupholders. Important too is the fact that the third row seats can be accessed from either back door — commendable if you need to embark or disembark passengers on a busy road.

Much of the time Sorento drivers will be using their SUV in five-seater mode — with the third-row seats folded away under the floor that means a generous 605 litres for luggage. And when heavy-duty hauling calls, it takes just a quick pull on the remote folding controls at the rear of the boot to drop the second-row seats — which will hand you a 1,662-litre loadbay with a seamless and totally flat and level cargo bay floor easily accessed via a high-opening tailgate. For the record, even with seats six and seven is use, there's still 142 litres left over for a few squishy bags.

Also strongly appreciated is the power-operated tailgate which can be opened and closed again from inside the cabin as well as outside using the key fob. And good, too, to find that the boot's cassette roller blind cover can be stowed away in its own customised slot below the boot floor. Also down there is a very large storage bin along with a full-size alloy spare wheel. Other appreciated touches include the lip-free load sill and a boot floor height that makes loading and unloading a back-friendly task. And any driver who's ever had to mess with a tyre repair kit will be further cheered to discover the Sorento's full-size spare wheel.

Should you wish to mix 'n' match cargo and passengers, rejigging the layout couldn't be easier thanks to the 40:20:40-split (and individually-sliding) centre-row seats that move fore/aft by 270mm giving you the choice of varying the boot length or adjusting leg room for those sitting in the second or third rows.

And what won't, or can't, go in the boot can always be towed — the 2.2 turbodiesel is more than up for a spot of hardcore hauling; it's happy to pull a braked 2,000kg. Oh, and don't forget you can carry a useful 100kg on the roof bars. Not only is the Sorento designed to accommodate all manner of tasks, from cargo-carrying to transporting people of all shapes and sizes and their luggage, it does it all with a smile.

Ł42K is a very persuasive figure for a comfortable and spacious seven-seater SUV, especially one equipped with all the bells and whistles. Add to that its seven-year, 100,000-mile transferable warranty and you can understand why some Audi Q5 and BMW X5 owners have been quick to trade them in for a new Sorento. ~ MotorBar