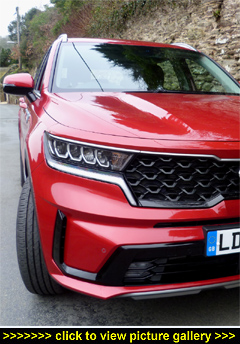 “Motorists are finally getting an
appetite for all-electric cars
although many have stopped short
of choosing pure electric having
discovered the equally sweet taste
of ‘hybrid’...”

Hybrid as in Kia's impressive new 7-seater Sorento HEV (Hybrid Electric Vehicle). With demand for diesel falling as the clock ticks down to an all-green 2030, petrol has found a new lease of life by partnering with electric — in the HEV this sees a turboed, direct injection 1.6-litre petrol engine combined with an electric motor that together deliver a gutsy 226bhp.

One of the most appealing aspects of the HEV's hybrid powertrain is never having to plug-in to charge up the battery pack — it does it for you as you drive. However, Kia hasn't turned its back on customers who still crave the diesel torque that's so good for towing: included in the new Sorento range is a 199bhp 2.2-litre diesel powerplant (another completely new engine, this one puts out 325lb ft of torque compared to the hybrid's 258lb ft) that will pull a full-fat braked 2,500kg (the hybrid is good for 1,650kg).

This fourth-generation Sorento sports a sharp new look that subtly camouflages its footprint, making it look 'faster' even standing still; a rakish, swept-back silhouette accentuated by eye-catching styling cues and contemporary geometric-tech detailing that gives it enough kerb appeal to compete even with premium rivals such as the Land Rover's Discovery Sport.

And, looks aside, when it comes to accommodation the Kia really does provide genuine space for adults in all seven seats. And talking of 'seven', the Sorento has something else none of its competitors can match — an industry-leading seven-year warranty.

So, step forward and swing open a door. You don't feel that you've climbed up into the classy cabin but once there you know you're riding tall. It feels massive inside and gives the impression of being as spacious as some bigger SUVs such as BMW's X5 and Audi's Q7. The driving position is lofty and even when you crank up the seat height the headroom seems to go on forever. The smart cloth-upholstered chairs feature textured centre panels and are big, supportive, well shaped, nicely bolstered and comfortably cushioned. Another key 'plus' — their fast-acting three-stage heating.

Not surprisingly, the driving position is spot-on; the view of the road ahead is superb and there's never any doubt as to what's going on to the sides or behind you. Instead of the usual selector lever the six-speed autobox is controlled by a space-saving rotary knob (R-N-D respectively at 11-, 12- and 1-o'clock, with a central press-button to engage Park) that works brilliantly plus you get paddle-shifters on the steering wheel for those times when you would prefer to take full control of the change-points yourself.

The central infotainment touchscreen incorporates Apple CarPlay and Android Auto and because the '2' doesn't get a built-in SatNav (unlike '3' and '4' models) you'll be glad of the smartphone mirroring enabling navigation apps for directions. There's also a DAB radio with a multi-device Bluetooth connection and voice recognition, music streaming, and Ecall which automatically summons the emergency services in the event of an accident. Also much appreciated by all aboard are the USB sockets fitted in all three rows so everybody can charge up their device while travelling without any turf wars.

The graphics on the black glass-faced eight-inch central touchscreen are crystal clear and the whole thing works fluently thanks to quick responses and foolproof menus. A welcome feature is the clearly identified — and non-touchscreen! — buttons and controls for the climate system that make adjustment on the fly far less distracting than taking your eyes off the road to finger-tap; you can adjust the interior temperature with a 'nudge' of either side's neat rocker switch.

To the right of the central display is a driver's digital instrument panel with easy-to-read virtual dials; the multi-configurable information panel between them is controlled using buttons on the steering wheel, displaying all the info you want at a glance including the two most important figures — a large digital readout of your road speed alongside the posted speed limit.

More good family news: you'll find an abundance of cubbies throughout the massive cabin for all your 'pocket lint' including a decent-sized lockable glovebox, a huge storage bin hiding in plain sight under the wide armrest separating the front seats, drop-down glasses holder, big door pockets, large dual-use cupholders, and a deep lidded tray at the base of the centre stack with three USB slots (two of which are fast-charging) and a shelf that makes a neat bed for your smartphone.

You not only feel very safe and protected just sitting in a Sorento but making sure it's more than just a feeling is plenty of active safety tech and assists starting with Forward Collision Avoidance which incorporates city, pedestrian, cyclist and junction detection (this spots an oncoming vehicle from the other side of the road when turning at a junction; if a collision appears likely, it applies your brakes to stop the car).

Moving on to the middle row, it's immediately obvious that this SUV is far roomier than many others of the seven-seater breed. There's a lot going on here in terms of seating options given that the 60:40-split second row backrests recline and each section individually slides fore and aft so legroom can best be shared out between those in seats six and seven and those using the middle row.

In their default positions the room is limousine-grade with plentiful headroom (a fist-and-a-half of it), sprawling leg room (Six-footers? Bring 'em on!) plus loads of width for three to travel companionably side-by-side; and whoever is sitting in the middle still enjoys a fist of headroom. Throw in huge side windows, great views out, a very wide made-for-sharing drop-down central armrest with built-in siamesed cupholders, dedicated air vents, a cupholder incorporated into each outer armrest, usable door bins, fast-charge USB ports, twin-pocket seatback pouches and shapely feelgood seats and you have a foolproof recipe for six very contented passengers. Can your SUV do that?

And then there were two… rearmost seats, that is. Accessing them is easy-peasy: press the button on either side's second row outer seat and it smoothly tilts and glides forward, making a big space for no-hassle entry to seats six and seven. The Sorento's third row is far more liveable than the 'perches' provided by some rivals — the Kia gives you shapely seats with comfy backrests set at a comfortable angle with decent room for knees and feet.

The views out are good too, with plenty of extra light coming in from the third side windows. Each seat has its own directional air vent with fan speed control, USB slot, armrest-cum-smartphone tray, cupholder, and air between the passenger's head and the roof. All of which combine to make it a pleasant place to travel even for grown-ups although they'll have to fight off the young 'uns first because kids just seem to love it back there.

For a family-oriented SUV you'd expect the ride to be comfortable — and it is. The fully-independent suspension does a fluent job of smoothing out bumps (while remaining firm enough to avoid any feeling of float or bounce) while '2' trim's deep-sidewalled 235/65 x 17" Continental rubber helps minimise any jolts from broken blacktop around town. Combined with good body control, the Sorento is a satisfying way to travel whichever of the seven seats you happen to be occupying, and all made infinitely better by the quiet ambiance.

Kia's new 1.6-litre hybrid powertrain puts out a combined 226bhp backed up by 258lb of torque. Quite a punch; and it more than delivers with plenty of zip pulling away and strong performance on the run. Low speed motoring is hushed because on a lightly loaded accelerator it will do its best to stay in EV mode.

Press down harder and the four-cylinder petrol engine will join the party but the 1.6-litre is no rowdy gatecrasher — most of the time its soundtrack is pleasantly laid-back so the cabin's refinement is not compromised and you certainly won't need to turn up the stereo. Ask it to and the Sorento will breeze past 62mph from standstill in a speedy 8.7 seconds. Officially the hybrid powerplant returns 40.9mpg and we actually bettered that, recording 41.6mpg over a week's pretty determined driving.

You can't carry seven in comfort without a large body. The Sorento measures 4.8-metres from nose to tail but it's nevertheless surprisingly easy to drive courtesy of the fine visibility and commanding driving position, and feels perfectly manageable around the houses and in the city (it's über-easy to park, too).

The quick and direct steering makes placing it a no-brainer as the Sorento responds confidently to the helm; taken through the twisties it feels sure-footedly composed and planted and you won't hear any complaints even from those sitting in the third row. Grip is always strong allied to well-managed body control and overall it serves up a satisfying drive whether you're flying solo, the designated driver for the school run, or when all the family are going on a summer holiday! The brakes are strong, progressive and completely drama-free, even in an emergency stop.

Swing up the Sorento's easy-lift, high-opening tailgate and Wow! Now that's what you call a boot! With seats six and seven folded away into the floor you'll be faced with a vast luggage hold — its whopping 813-litre capacity can manage an entire family's self-catering staycation luggage, swallowing up to ten carry-on suitcases stacked below the luggage cover roller blind.

Anytime you'd rather not pay for a night in an Airbnb just tumble the third row then press the switches in the boot to automatically fold down the second row to create a cavernous 1,996-litre loadbay with a flat, seamless floor that's also perfect for a good night's sleep! And whatever it is you plan on loading you can be sure of one thing — doing so will be totally hassle-free.

For the record, even when the third row of seats is occupied there's still 179 litres behind the backrests for a number of bags. Finally, the roof rails are not just for looks but will also carry stuff. And don't forget that the hybrid Sorento has the grunt to tow a braked 1,650kg — enough to haul a medium-sized boat or caravan.

The self-charging hybrid Sorento is priced from Ł39K which, compared to some rivals, makes it look a lot like Christmas. As well as 4WD, seven seats and an industry-leading 7-year warranty, it's smooth and easy to drive with sensible running costs, well stocked with kit, and offers an enormous seating arena with superb cargo flexibility. Don't even think of buying a 7-seater SUV until you've sampled one of these top-notch new Sorentos! ~ MotorBar