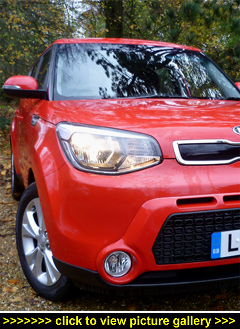 “Kia’s Soul has been well-received
by UK buyers since first setting foot
on British soil — now the bigger,
roomier, all-new second-generation
version is here to further capitalise
on its inimitable MPV-cum-crossover
persona and appeal...”

ALONGSIDE ITS UNASHAMEDLY EXTROVERT LOOKS, also a big hit with drivers is its higher-than-average seating position, something that takes much of the hassle out of negotiating our ever-more congested and tricksy roads.

Front-wheel drive (rather than fuel-sapping four-wheel drive), five doors and five seats are all also major pluses, even for those who mostly only use the front pair, leaving plenty of back-up room for extra passengers whenever as well as providing plenty of versatility for load-lugging or school run and even family pooch duties.

Note also that this latest generation Soul offers other worthwhile improvements: greater space in a refreshed cabin; improved safety; and, courtesy of an all-new platform based on the Kia cee'd, sharper driving dynamics.

Talking about those dramatic looks… 'dramatic' is no exaggeration — the Soul's splendidly boxy design, unusual 'tiger-nose' vertical front grille echoed by the floating body-colour 'backpack' panel set into the squared-off tailgate, itself edged by slim, high-mounted stacked tail lamps, and the lo-pro clamshell bonnet running level with a high-level waistline above strongly defined wheel arches all come together to create unabashed individuality.

Surprisingly for such a standout bodystyle, the Soul can also wear a striking paint finish without looking flash or in the least over-blinged. And, if you have the extrovert character for it, Kia offer some very eye-catching metallics such as Acid Green and Inferno Red.

Looks aside, whatever your personal fuel preferences — unleaded or diesel — there's a Soul to suit. Both 1.6-litre capacity units, the choice is between a 130bhp/119lb ft direct-injection petrol engine or a 126bhp/192lb ft turbodiesel. For labour-saving drivers, diesel models have the added advantage of an optional automatic transmission.

If neither fossil fuel type is green enough for you, then you'll be pleased to know that Kia also offer zero-tailpipe-emissions motoring — their 100% electric Soul EV is already on sale here; and it really does deliver the clean 132-mile range it says on the box.

Sticking with the conventional powerplants, there's a choice of five trim levels: Start, Connect, Connect Plus, Soul Mixx, and Soul Maxx. Whichever particular Soul you choose to be your 'mate', it will come well kitted-out. The 1.6-litre turbodiesel we've been driving for the past week is the middle-of-the-range Connect Plus.

Once in you sit high in supportive and comfortable seats upholstered in smart fabric with defining neat overstitching; great for visibility and great for lower leg comfort. And there's an abundance of headroom: even six-footers will have air between their crown and the roof lining.

It's a well-dressed cabin with plenty of premium high-gloss black finishes. The focal point of the fascia is a pin-sharp, eight-inch touchscreen that serves the SatNav and displays views from the reversing camera. Navigation graphics are 3D and spoken directions unmistakably clear. Helpfully, posted speed limits are also shown.

The three-spoke wheel has a very tactile leather rim and is seriously multifunctional with clear-cut controls for audio, voice, phone, trip, cruise, speed limiter, and the Flex Steer. Also easy to use while driving is the climate control system, which you really can set and forget.

Attention to detail can't be faulted; combined with genuine roominess — in particular masses of headroom even with the height-adjustable seats jacked up along with plenty of space between the driver and front passenger as well as between elbows and doors — it makes the Soul's cabin a very pleasant place to spend time.

And at a time when we're all carrying more personal kit than ever before (smartphones, tablets, etc), it sometimes seems that apart from cupholders you don't get any storage room in modern cars — thankfully the Soul isn't one of them and you'll find more than enough spaces to store all your 'stuff'.

If 'sounds-r-u' and, like an increasing number of people who now rely on their smartphones or MP3 players for their in-car music, you'll appreciate the Soul's DAB radio with USB and Aux ports. Another nice touch is the music-synced front speaker mood lighting.

Entering and exiting the rear cabin is easy thanks to low step-in and hip points. Once aboard, passengers sit higher than those in front with comfy outer armrests on the doors, plentiful leg- and foot-room and impressive headroom, all while enjoying good views out both to the sides and ahead between the front backrests. Best of all, the seatbacks are tilted back at an angle that's conducive to some full-on lounging — plus three can sit side-by-side in a civilised manner.

A head-friendly tailgate grants access to a more than reasonable 354 litres of boot space. For load-carrying just drop the 60:40 split-fold rear seatbacks — doing so expands the boot into a 1,367-litre loadbay. Extra versatility is provided by the two-level boot floor which in its higher setting makes loading easy as it sits level with the cargo-bay floor. And should you ever suffer a puncture you'll find a space-saver spare wheel beneath the lower boot floor.

Dynamically this reborn Soul is a sharper driver, due to it having both a substantially stiffer bodyshell as well as now using the same platform as Kia's competent cee'd models.

Handling is predictable; it's actually pleasurable to drive and can be hustled along very briskly, both on the straight bits as well as through the bends and corners. During our week we encountered some pretty filthy weather and plenty of flooded

Even with 17-inch alloys the suspension manages to keep its self-assurance on much of the UK's shabby blacktop and rides well.

In town its compact dimensions come in handy plus, of course, there's the three-setting electric variable power-assisted steering which we found delivered just the right assistance-feedback mix when in its Sport mode — so that's where it stayed!

On the move the turbodiesel's 192lb ft of torque is responsive and willing to pull; getting power down on the road through the front wheels is made easy by the slick-changing six-speed manual gearbox.

Flat out the Soul will hit 112mph; on the way up there the benchmark 60mph is passed in 10.8 seconds. Fast-moving motorways are taken in its stride — longer journeys are made even more pleasant by the quiet cruising ambience — plus there's ample heft to tow a braked 1,300kg.

Yet another easy-to-live-with car from Kia, the Soul really does make you feel you're being well looked after whether you're behind the wheel or behind the driver. With 50mpg taking good care of what's in your wallet as well! — MotorBar