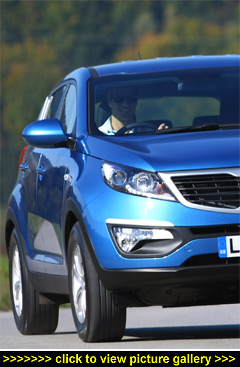 “With the looks of a mid-sized SUV
but the footprint of a family-sized,
five-door hatchback, Kia’s new
1.6-litre petrol-powered Sportage
crossover is here to dispel some
of those Budget Blues...”

WITH THE MISERLY CUT IN FUEL DUTY in the Budget grabbing the headlines, the 'news hounds' more or less overlooked the fact that many car owners will, from April, and due to the changes just announced, be paying more for their road tax, BIK company car tax and the fuel benefit charge.

Vehicle excise duty, for instance, will increase for all cars emitting CO2 emissions of 121g/km and above. The lowest increase is Ł5 for the 121-130g/km group for the Standard annual rate, rising to a Ł50 increase in the First Year rate for cars emitting over 255g/km.

Even the new budget-friendly Kia Sportage 1.6 GDi EcoDynamics has not been exempt from the increases in April. Its VED road tax goes up by Ł5 (to Ł130) and BIK company car tax goes up by one per cent (to 19 per cent) and increases to 21 per cent in 2013.

The award-winning Kia Sportage crossover range has now grown to 16 models with petrol and diesel engine options and, depending on engine choice, two- and four-wheel drive. Their latest frugal addition is the 1.6 GDi (Gasoline Direct Injection) models available with '1' and '2' grade trim and equipment levels.

This GDi engine joins the recently-added 1.7-litre CRDi diesel unit to run alongside the existing 2.0 CRDi diesel and the 2.0-litre KX petrol versions.

All-wheel drive is standard on 2.0-litre petrol and diesel models while the new 1.6 and 1.7 units are front-wheel drive only — labelled 'EcoDynamic', they feature ISG (Intelligent Stop and Go) technology.

Prices range from Ł17,015 to Ł26,740 with the new 1.6 GDi 1 2WD variant being the least costly. These new models are, of course, covered by Kia's much-publicised seven-year, 100,000-mile warranty which has the added advantage of being transferable between owners.

The Kia Sportage crossover has the looks of a mid-sized SUV but with the footprint of a family-sized, five-door hatch. It competes for sales against the sector-leading Nissan Qashqai as well as Peugeot's 3008, the Ford Kuga, Mitsubishi ASX and Volkswagen Tiguan. The Sportage also has competition from Kia's parent company in the form of the same sized and similarly styled Hyundai ix35 which has the same engine and drivetrain options and is marginally cheaper but only has a five-year unlimited mileage warranty.

Having the exterior styling and the elevated seating positions of an SUV but with the compact size and fuel economy of a family hatchback have been the 'drivers' for the success of the crossover market. Kia expects to sell around 10,000 Sportage units in the UK this year, with the 1.6 GDi petrol accounting for 25 per cent of sales, the 1.7 CRDi diesel 39 per cent, the 2.0 CRDi diesel 25 per cent and the 2.0 KX petrol 11 per cent. This equates to 64 per cent diesel sales and, ironically, 64 per cent sales for two-wheel drive models. Retail customers will account for nearly 70% of UK sales.

Priced at a very attractive Ł17,015, my most recent Sportage test model was the new 1.6 GDi gasoline direct injection petrol version with front-wheel drive, a six-speed manual gearbox and with level 1 specification.

For me, as a country person, I would always go for a 4x4 SUV or crossover bearing in mind the ice, snow, rain and mud we usually encounter plus the potholed state of our roads — but 64% of Sportage customers choose 2WD models. If it looks like an SUV I believe it may as well be one, but I can see the attraction for young families and older empty-nesters that need roomy, stylish but fuel-friendly motoring and live or travel in or around towns and cities.

The Sportage has distinctive styling; it looks good on the road and kerb-appeal is important even in these frugal times. The wedge-shaped profile and high ground clearance makes it look an expensive product. The high waistline results in relatively shallow side windows and the tailgate window design also limits visibility.

However, inside the Sportage the five-seat cabin is relatively conventional and seems well put together although the rear seat backs do not fold completely flat to maximise load carrying when required. Boot and load space is 564 to 1,353 litres.

As for the engine, well it copes with most driving conditions as long as you're patient. GDi direct injection petrol technology was invented by Mitsubishi Motors some 15 years ago. It allowed high-pressure fuel injection providing the meanest use of fuel/air mixture with the maximum fuel economy and lower CO2 emissions. The technology also included variable injection timing — multiple input of the fuel/air mixture through the cycle of each piston's induction and compression cycle.

Today this technology has been adopted by most manufacturers and also now includes variable valve timing and turbocharging, which all add up to getting more power from smaller capacity engines while still achieving better fuel economy and less emissions.

The only drawback to the Kia/Hyundai 1.6 GDi engine is that it does not have a turbocharger to boost the acceleration response from low to medium speeds that other manufacturers have adopted. This means liberal use of the gearbox — thankfully it's really slick to use. Rolling starts away from road junctions or roundabouts are sluggish. Just getting a low-pressure boost at low rpm speeds would really improve the overall performance, just as it does with MINI/BMW, Ford, Vauxhall and VW Group lower capacity direct injection petrol units.

Once underway and in the engine's powerband, acceleration is fine; it's responsive, and cruising on motorways is quiet and smooth. It just needs that low-down 'kick' from low speed to make it competitive. On the plus side, the overall fuel economy was 39.4mpg which included all types of driving from motorway cruising to in-town trundling.

Officially, the Combined Cycle consumption is 44.1mpg with CO2 emissions of 149g/km, meaning a road tax bill from April of Ł130.

Performance figures are almost irrelevant these days but the 1.6 GDi Sportage has a top speed of 111mph and zero to 60mph takes 10.7 seconds — not fast but quick enough for most sensible users.

The ride comfort and road holding is acceptable for a tall SUV-type vehicle — not as good as the Peugeot 3008 crossover — but it's the purchase price, fuel economy and high specification plus the good looks that will appeal. For: the looks, very well equipped, practical, delivers relatively good fuel economy and is the best value for money model in the range. Against? Lacks the low-down engine response a turbocharger would give and the rear seats do not fold fully flat.

The Sportage 1.7 CRDi diesel model costs Ł1,535 more than the GDi petrol version with the same specification and both with 2WD. Even allowing for the Ł15 a year less road tax and for the official 10mpg better fuel economy offered by the diesel unit, the saving on the purchase price for the GDi version over the 1.7 diesel model is considerable and that saving will buy quite a lot more fuel. — David Miles