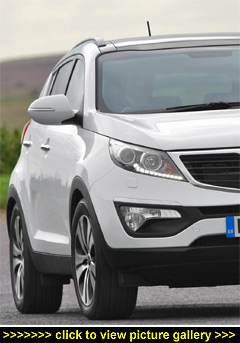 “When is a Crossover really an SUV?
A difficult question to answer. The
easiest definition is that as soon
as a crossover has a 4x4 drivetrain
then it’s a compact SUV. So, what
does that make Kia’s latest Sportage
2WD — a crossover, SUV or 4x2?”

MANUFACTURERS USED TO BE SHY about labelling their compact 4x4s as SUVs because of the latter-day backlash against 4x4s of all types. But then someone came up with the 'crossover' tag. As the segments of the new car market become even more blurred, the term 'crossover' has really come into its own: we can have crossover hatchbacks with MPVs; hatchbacks with SUVs; hatchbacks with estates; and so on...

Following the recent bad winters, sales of 4x4s of both crossovers and SUVs are now once again big business, with these types of vehicles now accounting for one in ten new cars sold in the UK — that's around 200,000 units a year.

The Kia Sportage five-door range, launched in August 2010, comprised, until recently, of all 4x4 models with 2.0-litre petrol and diesel engine options but carrying the crossover classification.

Kia recently introduced two additional new engines, both with emission reducing technology and with two-wheel drive only. So, like the sector's sales-leading Nissan Qashqai and the Sportage's sister models from Hyundai (the ix35), these line-ups are now a mixture of crossovers and 4x4s — or should it be 4x2s and 4x4s?

Whatever we call them, the fact is that the Sportage range now includes a 133bhp 1.6-litre GDI (gasoline direct injection) petrol engine and a 114bhp 1.7-litre CRDi turbodiesel unit with, and despite the recent hike in VAT, prices starting from an attractive Ł17,015. They are also, of course, covered by Hyundai's transferable seven-year, 100,000-mile warranty.

The new 16-model range is based on Kia's familiar 1, 2 and 3 trim designations; all-wheel drive versions are given a KX preface. There's also a special range-topping 'Sat Nav' grade of the Sportage 3 and KX-3, featuring a fully-integrated 7-inch touchscreen satellite navigation system with built-in reversing camera and upgraded audio sound system. All other versions are also extremely well specified.

So, four engines, two- or active four-wheel drive, manual or automatic transmission options and many with Kia's Intelligent Stop and Go (ISG) system complete a formidable line-up. No wonder they're selling like hot-cakes to the young singles, couples and the not so young. I can see why customers of all ages and types are attracted to the Sportage and the ix35 because of the attractive prices, long warranties, low running costs and affordable taxes. Another case of the right products at the right time.

I have written about the Sportage before, at its introduction last year, but as a brief reminder it's the size of a C-segment, five-door hatchback with increased ground clearance, chunky looks with a high waistline. Inside, it's well equipped with logically displayed instruments and controls and with three rear seats for two adults and a small child. These fold to make a large-ish load bay for even more versatility, providing between 564 and 1,353 litres of cargo space.

All versions of new Sportage 3 and KX-3 are also available as a special range-topping 'Sat Nav' model which includes a rear-view safety camera that transmits an image to an LCD colour display integrated into the 7-inch, in-dash screen. This model is also available with an upgraded audio system with external amp and sub-woofer.

Sportage is thoroughly modern and meets the needs of today's customers whether they want two- or four-wheel drive.

Personally, I'd always go for a 4WD because I live in the country but these versions only come with the 2.0-litre petrol or diesel engines priced from Ł21,255 for the petrol and Ł22,810 for the diesel.

So wearing my frugal driving hat, my test Sportage was the new 1.7-litre CRDi 2WD, priced from Ł18,550. However, fully loaded in specification 3 Sat Nav guise it weighed in at a hefty Ł23,065. For Ł255 less I could buy a 4WD 2.0-litre CRDi diesel version with a lower specification, but still well equipped, with a bit more oomph and, of course, the security and safety of on-demand 4WD for when the going gets tough.

If you want to get into the trendy Sportage way of life but have budgetary limitations then the new 1.6-litre GDI 2WD model with the lowest spec only costs Ł17,015 and for many that will be the 'best buy'. We'll be putting that version through its paces shortly.

Back to the fuel-miserly 1.7 CRDi 2WD which, like the new 1.6-litre GDI petrol engine models, has ISG Stop and Go technology with a slick to use six-speed manual gearbox and carries 'EcoDynamics' badging. The 1.7-litre CRDi four-cylinder turbodiesel engine with the level 3 equipment, which includes 18-inch alloy wheels, is officially capable of 52.3mpg average fuel economy.

My test car, driven over all types of roads and on long and short journeys, returned a very creditable 49.4mpg. CO2 emissions are only 135g/km with 16 or 17-inch alloys but with the 18-inch wheels this goes up to 143g/km. This makes the road tax Ł125 a year instead of Ł110, and the BIK company car tax 20% instead of 19%. So size does matter and thinking small might be financially better.

The new 114bhp 1.7-litre turbodiesel engine performed adequately in spite of the tall fifth and sixth gear ratios. No ball-of-fire under hard acceleration, but being sensible on today's congested and potholed roads it was acceptable. Top speed is an illegal 107mph and zero to 62mph takes 11.9 seconds, which gave me time to enjoy the view.

Actually, given its size, it felt quite nippy in and around traffic thanks to the low-down torque (188lb ft is available from just 1,250rpm). Reasons to buy: fuel-frugal, low taxes, smart looks, versatile, lower spec version is less pricey and even less taxing. Take note, though, that the bigger wheels mean the top specification 2WD model carries more road tax and overall is relatively expensive, making some 4WD versions cheaper.

Other plus points include being easy to park, predictable body control and ride comfort on country roads — and it can hold its own at motorway cruising speeds without distress. All features most crossover customers will be happy with, so this Sportage hits the target even if it's at considerable cost. — David Miles