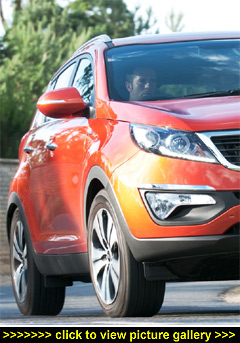 KIA MOTORS UK HAS SECURED AN ADVANCE ORDER of 850 early production righthand-drive new-era Sportage 'crossover' five-door, five seat cars powered by the new 2.0-litre R-family, 134bhp, common-rail diesel engine. The new model has Intelligent All-Wheel Drive which means front-wheel drive most of the time moving to 60:40 all-wheel drive when the road grip gets poor with a selectable 50:50 drive distribution lock for off-roading. Prices are Ł20,777 for the manual version and Ł22,077 for the automatic models.

In November, the Slovakian-built range will be see the arrival of mainstream models with three further engines; a 1.6-litre direct-injection petrol, 2.0-litre multi-point injection petrol and a 1.7-litre turbodiesel unit to go with the 2.0-litre CRDi turbodiesel used in the First Edition.

The 1.6/1.7-litre units will have Kia's Intelligent Stop & Go (ISG) technology, two-wheel drive and six-speed manual gearboxes. The 2.0-litre petrol and diesel engine models will have all-wheel drive and manual or automatic transmission options. Mainstream models are expected to start at around Ł17,000 but prices and specification levels are still to be announced. The new maximum braked towing capacity is 2,000kg.

Currently, around 3,500 to 4,000 Sportage cars are sold in the UK each year but the new range, boosted by interest from the fleet and business user-chooser markets plus younger families attracted by the youthful styling, will push this annual total up to 10,000 UK sales.

Currently the fleet and business user sectors are attracted by the low tax implications of the new generation 'crossovers', headed by the two-wheel drive versions of the Nissan Qashqai, Peugeot 3008 and Ford Kuga.

With a high level of specification, the advance-party Sportage First Edition 2.0-litre CRDi costs a fairly weighty Ł20,777 but justified by the kit and equipment which includes full-leather upholstery, dual-zone climate control, heated front seats, rain-sensing wipers, an excellent reversing camera viewed via the rear-view mirrors, LED daytime running lights and 18-inch alloy wheels. As standard the vehicle has a six-speed manual gearbox and there is the option (for Ł1,300) of a six-speed automatic transmission.

The new Sportage crossover is longer, lower and wider than the SUV it replaces. It also weighs around 90kg less and has a sleeker aerodynamic profile, with a Cd down from 0.40 to 0.37. All of this has ensured that it is not only more stylish and sporty, but also more environmentally friendly.

Kia says the aim with the new Sportage was to make it an object of desire rather than simply a mode of transport — the allure of a Kia should extend well beyond the fact that it moves people from one place to the other. Certainly it is eye-catching and looks a classier vehicle, being sleek and rakish, and not an out-and-out SUV.

It is a radical departure from the 2004 model it replaces. It successfully incorporates the key features of a thoroughly modern five-door, five-seater family-sized SUV in a more urban-friendly, more athletic and more muscular package. It features the 'tiger's nose' grille surround that Peter Schreyer, their head of design, is turning into a Kia trademark and an instant brand identifier.

The high shoulder and low roof lines meet in striking reverse-angle C-pillars that are claimed to improve the view out for rear passengers despite the high waistline and narrow depth windows. The First Edition version, with its dark interior, seemed claustrophobic but future models with the panoramic sunroof option will brighten up the interior and make it more airy. The roof rails, ribbed roof, chunky door handles and large wing mirrors are as much signs of the new Sportage's street-wise urban toughness as its capability in difficult conditions.

The relatively spacious five-seat cabin is dominated by a high-level, multi-tier dashboard that narrows as it sweeps in from the sides towards the middle, leading into an eye-catching centre console. The design deliberately emphasises the width of the new Sportage and at the same time gives occupants a feeling of protection and safety.

The leather upholstery looks and feels welcoming and while there is a lot of dark plastic trim that lacks visual appeal, it will be durable for family use. The boot is large with 564 litres of space; 1,436 litres with the rear seats folded.

The 2.0-litre diesel engine in the First Edition model develops 134bhp at 4,000rpm and 236lb ft of torque from just 1,800rpm, giving it a better power-to-weight and torque-to-weight ratio than the outgoing Sportage with the older 2.0-litre diesel engine. Yet the new one is more fuel and tax-efficient and potentially less damaging to the environment.

In combination with the six-speed manual gearbox it delivers a combined economy of 47.1mpg — a worthwhile 7.3mpg better than the old car — with CO2 emissions of 156g/km; a huge reduction of 31g/km. Despite being more environmentally friendly it also accelerates more quickly and has a higher top speed. Even the six-speed automatic outscores the previous manual model, with fuel consumption of 40.4mpg (versus 39.8mpg) and CO2 emissions of 183g/km (formerly 187g/km). It is also quicker and faster than the previous manual Sportage.

The new First Edition comes as standard with intelligent electronically-controlled, single high-ratio all-wheel drive that normally delivers 100% of engine torque to the front wheels. But the torque can be redistributed up to a maximum of 60:40, front-to-rear, to enhance cornering stability or if road conditions deteriorate. For off-road driving, drivers can manually select Lock mode, which gives a 50:50 torque split for speeds of up to 25mph.

A number of new electronic features have been added to the new Sportage, increasing safety for on-road driving and the car's capability for those owners who wish to go off-road or who live in areas where bad weather and poor driving conditions are facts of life.

Standard-fit Electronic Stability Control (ESC) counteracts any tendency of the car to understeer or oversteer in hard cornering or slippery conditions. It is linked, in the new Sportage, to three additional systems: Downhill Brake Control (DBC), Hill-Start Assist Control (HAC) and a roll-over sensor.

DBC ensures the Sportage maintains a steady speed of 5mph when descending steep slopes. HAC has the reverse effect; preventing slip-back when setting off uphill and eliminating the possibility of wheelspin.

The roll-over sensor detects when the car might be in danger of rolling over and deploys the side and curtain airbags and seat-belt pre-tensioners so that occupants are fully protected should the worst happen. And as is now the norm with Kia, the new Sportage is covered by an unrivalled seven-year, 100,000-mile manufacturer's warranty.

In my first Sportage test drive this week, using the winding and hilly routes of the Cotswolds plus a stretch of motorway driving, the new model proved to be a capable and comfortable performer.

The torquey engine felt strong and responsive mid-range and thankfully not over-geared to produce unrealistic fuel economy figures that detract from real-life driving conditions. The manual gearbox was slick to use, the steering well weighted although lacking in feel at times. The 18-inch wheels were prone to 'vibration' after hitting deep potholes and there was some road noise intrusion but I suspect that the 17-inch alloys, for future mainstream models in the range, will be a better choice.

The handling was agile and felt very car-like. Being tall there is some cornering body roll but less than expected. The Lotus-tuned suspension (using UK roads as the universal blueprint) coped really well with absorbing potholes and much better than a conventional mid-sized SUV or 4x4.

The new Sportage conforms with the move from SUV to crossover buying trends, has distinctive styling and is well equipped with a family-friendly interior. In addition it has a strong and flexible engine, is agile with a comfortable ride and boasts a long seven-year warranty. Minor criticisms include the rear visibility but, that noted, the reversing camera and parking sensors do help. Other niggles — too much bland interior plastic trim, low depth widows and rear seatbacks that do not fold down completely flat for maximum load carrying — should be noted, and there is some road noise intrusion from the large wheels and tyres.

That said, overall the new Sportage will be an easy and reasonably affordable car to live with. Depending on taste, it is an eye-catching and relatively stylish car, very modern in its appearance — as you might expect given it has been designed by Peter Schreyer, the man who penned the Audi TT. With the high expectations Kia has of it in terms of sales, you can bet on seeing loads of them on our roads next year when the full range becomes available. — David Miles