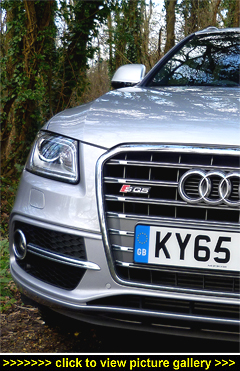 OUTWARDLY A SPORTS UTILITY VEHICLE that slots logically between Audi's Q3 and Q7 line-ups, the flagship of the Q5 range, the SQ5, is also a road-burner par excellence thanks to a mighty powerplant: beneath its near-chest-high bonnet lurks a 308bhp twin-turboed 3.0-litre V6.

Road-burner it might be but its understated SUV bodyshell cloaks its tearaway talents exceedingly well. Apart from 20-inch wheels, a platinum grey grille, subtle SQ5-emblazoned black front brake callipers and a pair of double-barrelled chromed tailpipes at each rear corner, there's not much to let on that this is one of the quickest Sports Utes money can buy.

Potent though 308bhp is, what makes the SQ5 so vivid power-wise is what's backing-up the horsepower — a whopping 479lb ft of torque, every lb ft of it available to your right foot from 1,450rpm all the way through to 2,800. And all of which is laid down on the blacktop via a tiptronic autobox working in tandem with Audi's permanent all-wheel drive quattro system.

If you think that 'speed is sin' then turn away now, because this five-seater SUV runs to double the UK's legal limit — and then some. Actually, it would go faster but it's electronically limited to 155mph. More usefully, it rips past the 62mph marker from standstill in just 5.2 seconds. Sinful indeed!

The devil, they say, is in the detail. And the SQ5's interior is devilishly well detailed with satin aluminium garnishing the switchgear, gearshift paddles and the beautifully-finished 'S' gear selector knob, as well as the brake and accelerator pedals. Fit-and-finish is top-drawer with logical ergonomics, and the ambiance is everything that discerning customers have come to expect from Audi

Open either front door and it's an easy 'sit and swivel' into one of the fine Nappa leather Sports seats. 'SQ5'-embossed, powered, and also with electrically-adjustable lumbar support and manually-extendable under-knee support, they're supportive and notably pleasant to travel in with plenty of personal space in all directions.

If you've just climbed in on the driver's side you'll be facing an SQ5-badged steering wheel with a meaty, good-to-grip, leather-wrapped rim. Easy-to-use multifunction controls and paddle-shifters on the horizontal spokes make it easy to keep your driving 'hands-on'. The classy instrument pack consists of a driver's computer display flanked by a rev-counter on the left and an honest (but not in the least boastful) 160mph speedometer on the right. Smaller, equally classy, secondary dials cover coolant temperature and fuel.

With faces finished in grey and bright white needles and numerals, the dials are easily read although the digital road speed figure in the driver's display is easier to 'clock' in a quick glance so, despite the analogue speedo's attractiveness, it won't be your first choice when checking your speed.

While you might feel that an all-singing-all-dancing SatNav system should be standard-fit on the SQ5, paying another Ł1,695 gets you the Technology Pack. This gives you the upgraded MMI Navigation System Plus: hard disk navigation with topographical map display, places of interest and town models in 3D, all shown on a high-res seven-inch colour TFT display.

The system offers three alternative routes, with the ability to scroll along the selected route and manoeuvre within the map and has full postcode destination entry, split-screen mode for route information, dynamic route guidance, and intersection zoom, plus motorway exits and lane recommendations in the Driver's Information display between the main dials.

It also adds two SD card readers, single CD/DVD player, 40GB hard drive and a 20GB Jukebox for storing and managing music files. Bundled in is a connection for use with stereo audio sources, USB and MP3 devices including Apple iPod (generation 4 onwards) and Apple iPhone as well as an acoustic and visual park assist system for the front and rear.

Setting a first-class driving position takes but seconds and once done there's a commanding view over the bonnet between the slim screen pillars. Not only do the deep side windows keep it bright inside the all-black cabin but they also ensure excellent all-round visibility; placing the SQ5 accurately on the road is a cinch.

Q5 models are intended to serve the family and seating in the SQ5's rear cabin is as accommodating as it is comfortable; the outer seats match those in front so are well-shaped and feature adjustable seatbacks with decent built-in support for your lower back along with coat-penetrating three-stage heating.

The padded central armrest is set at a relaxing height and the outer armrests shaped for comfort. Bottles can be stored in the door bins and magazines in the netted pockets on the front seatbacks. There's also dedicated rear cabin AirCon with independent temperature and fan control and, more good news — a third passenger can travel in the middle seat without feeling they're flying budget class.

At 540 litres the boot is way big enough to pack in a family's luggage. Should you need the whole wagon for a spot of hauling just pull the two levers in the boot and both split seatbacks are folded down for you without further ado (pressing lightly down on them locks them in place for extra safety when carrying cargo). The resulting 1,560-litre loadbay is easily accessible via the large, high-lifting tailgate.

Loading is back-friendly thanks to a boot floor that's level with the bumper and just above knee height. Handy features include the net pouches that hang, hammock-like, under the rigid rear parcel shelf-cum-load cover's lifting rear section, and the stretchy luggage net attached to the four sturdy chromed tie-downs set in the boot floor.

There's also a first aid kit in a smaller netted side pocket and a couple of bag hooks. The 20-inch wheels mean that instead of a spare you get a space-saver that travels collapsed but which, when needed, is quickly inflated by the compressor installed under the boot floor.

For the record, in-cabin storage has not been forgotten: along with a dedicated net cradle for your smartphone in the large, cooled two-tier glovebox you'll find real-world-sized door pockets, useful lidded cubbies discreetly out of sight in the bases of both front seats, a drop-down holder for your shades, and large Siamesed twin cupholders.

There's no full-on RS version but don't think that lacking an 'R' makes the SQ5 anything less than hugely accelerative — nudge back the selector lever from Drive into Sport, floor the accelerator and all hell breaks loose — in the most delightfully civilised way. No fuss; no smoke, no scrabbling; the SQ5 simply lunges forward… it's a bit like riding in on the big one at the north shore of Oahu. The difference is that unlike a wave, the SQ5 just keeps going and going.

Managing all that power with panache is an eight-speed tiptronic autobox that changes smoothly even at full charge. For pub quizzers it's a torque converter not an S tronic double-clutch unit, but still a perfect partner to the biturbo V6. Feeling lazy? Then let Drive do it all for you (and very fluently it will, too); Sport injects real verve into your journeys and makes overtaking lesser traffic a safe, effortless and totally worry-free manoeuvre. Manual gear-changing using the wheel-mounted paddle-shifters, either in Drive or Sport, gives the driver direct control of all eight ratios.

'Nice but dim' is how motorists once viewed big SUVs. Nowadays, with all-wheel drive being used predominantly to enhance on-road ability, their driving dynamics are in a whole new ball game — now it's the SUVs partying at the Nürburgring!

Most SQ5 customers will gladly pay the extra Ł220 Audi charge for their Drive Select system which, as its name makes clear, allows drivers to select, whenever they please, from five drive-and-ride modes: Auto, Comfort, Dynamic, Eco and Individual. As we've found — particularly with Audi's seriously hard-charging RS models — Drive Select's Dynamic and Comfort modes do indeed make a positive and palpable difference to, respectively, handling dynamics and ride comfort.

Fortuitously, it wasn't fitted to our test SQ5. We say fortuitously because not having Drive Select showed just how good the SQ5's out-of-the-box ride comfort is — a deal-maker given that the majority of British drivers now consider 'good ride quality' essential to compensate for the UK's slapdash road surfaces. Not a problem for the SQ5: speed humps and broken roads are rolled over fluently, even on the standard-fit twenty-inchers.

The SQ5's Sports suspension sits it 170mm above the blacktop (regular Q5s have 200mm of ground clearance). Even so, your expectations could be that while it will cream the straights, it's still a bulky 4x4 SUV so won't cut it on the twisties. Think that and you'll be so wrong…

Driven quickly there are no unpleasant surprises when you turn-in and apply the power hard. And if you were expecting some wash-out or disconcerting body lean through the bends you'll be very pleasantly disappointed because, courtesy of its quattro all-wheel drive system, it has one undeviating attitude whether the front wheels are tracking straight ahead or turned to the side: Grip & Go.

Correction, make that smile-inducing Grip & Go. Significantly, speed can be carried through bends for 'catapult' exits in Sport mode. And even in the wet your A-B times will be barely any slower.

Being a 4x4 SUV you'd also expect off-road ability. Even with 30mm less between its underbelly and the ground the SQ5 will still take you off-tarmac. Everyday stuff like crossing slippery grass fields and muddy tracks can be taken for granted, even when towing (upto 2,400kg braked). It's not afraid of getting its 'feet' wet, either: water as deep as 170mm can be waded. You also get Downhill Assist for controlled descents on slippery slopes.

To the surprise of most people, when it comes to that other major motoring 'vice' — fuel consumption — the SQ5 is almost saintly, returning around forty miles for every gallon of diesel fuel it drinks. Of course, if you can't resist lighting up the turbos at every opportunity you probably won't be seeing the official 42.8mpg too often. Mind you, in spite of some pretty enthusiastic driving we recorded an average of 37.5mpg over 500 miles with 'our' SQ5 — very impressive given its beguiling press-and-squirt power delivery.

The SQ5 is a practical, family-friendly, manageably-sized SUV; it's also an addictive, seamlessly-fast, ground-covering driving machine. For many this 'Q' car will be the perfect all-rounder — and not just for its fun driving dynamics but for the way it makes you want to Never Say Never Again to family motoring! — MotorBar