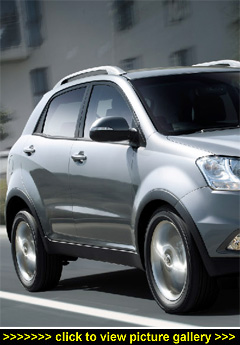 “SsangYong has survived riots and
near bankruptcy but, in spite of all
that, the South Korean ‘comeback
kid’ has just launched its new
midsized crossover range into the
UK — the Korando...”

THE 'COMEBACK KID' tag is well-earned: since the Asian economic crisis in the late '90s, SsangYong's owners have been SsangYong, Daewoo, China's SAIC, and now India's giant Mahindra & Mahindra, which last year rescued the company from Chapter 11 bankruptcy.

The new SsangYong Korando has been designed in Europe for Europe by Giorgetto Giugiaro of Ital Design. As such it sports a contemporary look with styling that blends elements of a 4x4/SUV and a five-door family hatchback.

SsangYong has developed a four-cylinder 175bhp 2.0-litre turbodiesel engine that powers all Korando models — and unlike other engines in the SsangYong line-up, it's not sourced from Mercedes. In front wheel-drive spec, the Korando officially returns 47.1mpg with 157g/km of CO2 emissions. Full 4x4 versions with a six-speed automatic 'box manage 37.7mpg with emissions of 199g/km.

With prices starting at Ł16,995, the Korando is claimed to offer good value for money and also comes with an attractive five-year 'limitless' mileage warranty. Carrying the top price in the range is the Ł22,995 EX auto 4x4, which SsangYong says is up to Ł3,000 cheaper than its main rivals.

SsangYong also claims the Korando has the highest power output, the longest wheelbase, the largest interior and the highest towing capacity out of its main competitors (Hyundai ix35, Kia Sportage, Mitsubishi ASX, and the Nissan Qashqai).

The Korando is certainly roomy, with space enough for five adults and good legroom in the back. There's 486 litres of load space and this trebles in volume with the rear seats folded. And owners with active lifestyles can happily use their Korando crossover for towing — it pulls 2,000kg braked.

With European styling, the Korando looks what it is and while it's no work of art, its strongest appeal in these cash-strapped days will be the price; and what you actually get for your money.

The interiors are a bit dark and bland, and the plastics hard rather than the latest soft-feel kind now fitted by most mainstream manufacturers. Nevertheless, a key USP for many customers — price aside — will no doubt be the five-year 'limitless' mileage warranty which SsangYong says does what it says on the label.

However, one of the lesser reasons to buy at this stage is the unproven residual values — the brand's chequered past and interrupted trading in the UK will not help in this area, and buying a new vehicle cheaply will not offset the possible poor residual value when it's time to sell. On the plus side, the Group 19 insurance rating shouldn't break the bank — although the road tax might.

Fuel consumption figures vary across the range, from 47.1mpg for 2WD versions down to 37.7mpg for the 4WD auto. My test drive over country roads in the 4x4 automatic saw an average of 31.4mpg.

As mentioned earlier, and unusually for SsangYong, the Korando's engine and automatic gearbox isn't from Mercedes stock: the new 2.0-litre turbodiesel engine is SsangYong's own (the automatic transmission comes from an Australian automotive component supplier).

The engine is probably the best feature of the Korando. 175bhp and, more importantly, 265lb ft of torque, make it bright, lively and responsive, especially in the midrange as its peak torque is produced during a narrow (for a turbodiesel) 2-3,000rpm power band.

However, that midrange power and response is ideal for the UK's country and busy roads. Only at higher motorway cruising speeds will the lack of torque response be noticeable. Top speed for the auto is 116mph, with zero to 62mph taking 9.9 seconds.

Pushed hard under acceleration, the four-cylinder unit does sound a bit harsh although the first thing you'll notice once you pull away, even though the paper performance figures are only average, is just how lively it is. At 31.4mpg, fuel consumption with the six-speed torque converter auto 'box was not brilliant — modern twin-clutch autos are much better and improve fuel economy rather than decimate it; and these old auto transmissions also push up the CO2 emissions.

2WD is used most of the time but the system switches automatically to 4WD when front wheel grip weakens. A 4WD Lock switch provides 50:50 traction for speeds up to 25mph.

The Korando's suspension mops up the thumps and bumps of our substandard British roads and the handling is sure-footed although there's considerable bodyroll during cornering. If anything, the suspension is a tad too soft as the front-end 'dives' under only moderate braking. And while the steering is consistent, it lacks any real feel or feedback.

Against? Unknown residual values and higher emissions than its main competitors. On the plus side you get a high specification and long warranty for the price, chunky styling, a roomy and comfortable cabin, and a lively engine. While the Korando might have its limitations, value for money isn't one of them. The best SsangYong to date. — David Miles