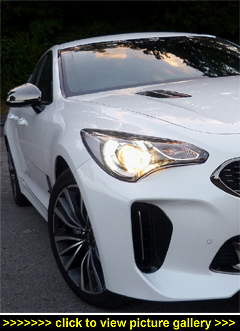 AND YOU CAN TAKE YOUR TWO LITRES in one of to ways: unleaded or 2.2 diesel. Given the way the 'green' wind is blowing these days, petrol is once again king. Which is why we plumped for spending a week behind the wheel of the 2.0 T-GDi (for turbocharged gasoline direct injection).

While its twin-turboed V6 flagship big brother packs a 365bhp punch, the four-pot 2.0-litre petrol engine version is no welterweight with a 244bhp wallop and 260lb ft of torque. Enough to get it off the line to 60mph in 5.8 seconds and head-butt 149mph flat out. Like the V6, its engine is partnered with an eight-speed autobox. And it all that sounds good then so is the price — you'll only need to find Ł32K for the T-GDi against the Ł41K wedge you'd need to drive away in a 168mph V6.

That's an equation that will suit many a keen driver because not only does the 2.0-litre version looks as jaw-droppingly jaunty, but it's kit-list is comprehensive enough to make a BMW 430 Gran Coupe think twice. The fact that it also costs around Ł8K less than one of the German rear-driven models makes the Stinger even more tempting.

At close to five metres from sharkish nose to fastback-style tail underscored by a spoiler and diffuser with four tailpipes, the coupe-styled Stinger gives off an imposing air. The sloping roofline enhances its low stance, while at the front it sports a sleeker version of Kia's trademark 'tiger nose' grille.

Overall the proportions are elegantly classic gran turismo: long bonnet; long wheelbase with the cabin positioned towards the back of the car; broad shoulders and a lengthy rear overhang. The airflow vents in the front lower bumper and lower front wings plus those set into the bonnet are all functional.

Swing open the driver's door and the first thing that grabs your attention is the sumptuous-looking leather and the dash centrally capped by a large 8-inch infotainment and navigation touchscreen. A suede-feel headlining and textured aluminium and high-gloss black finishings add to the GT ambiance as do the sporty, bolstered seats; all nice touches that underscore the fact that much thought has gone into getting the 'feel' just right. Take away the badges and you could be sitting in a new Mercedes.

You sit low and feel an integral part of the car but visibility is fine with a clear view down the long bonnet. As you'd expect, both front seats are electrically adjustable (including lumbar and with three-stage heating) and setting the perfect driving position is done in a jiffy. And thanks to a two-setting memory recall function that not only includes the seat and door mirror positions but also the head-up display, you never have to reinvent the wheel. Talking of wheels, the multifunction steering wheel is a sporty flat-bottomed three-spoker with manual override paddle-shifters on the horizontal spokes and perforated leather work areas that feels comfortable in your hands. It's also heated and adjusts electrically for rake and reach.

Ahead of it is a crystal clear instrument panel with classic-styled white-on-black dials and, between them, a seven-inch multifunction digital driver's computer; a large digital speed readout is shown alongside the posted limit, which is repeated on the navigation mapping on the touchscreen. Standard-fit is something else you might not be expecting — a customisable head-up display that not just your road seed but turn-by-turn navigation information, cruise, and blind spot detection warnings.

Wherever you may roam in your Stinger you'll always know exactly where you are courtesy of Kia's Connected Services and the logical and foolproof TomTom navigation that also provides access to traffic updates, speed camera locations, weather information and local searches.

Comms too are well served by Apple CarPlay and Android Auto smartphone connectivity with voice control for further linkage to maps, music podcasts, audio books and texts. Android Auto can also access Google Maps navigation and Google Play music. A nine-speaker stereo with DAB radio (with MP3 compatibility) supplies your sounds or they can be streamed via Bluetooth.

The two-zone automatic climate control switchgear is sited below a neat strip of 'hard' infotainment menu jump buttons (map and media along with the hazard warning button) just under the three circular central eyeball air vents — everything is clearly marked and within easy reach. There are some subtle stylish touches; such as the head-up display that switches to italics when you're driving in Sport mode. You'll also find a generous amount of storage space — including ample USB charging and 12 power sockets plus bottle-holding door bins and welll-sited cupholders — spread througout the cabin.

The 2.0 T-GDi engine kicks out appreciably more poke — 244bhp and 260lb ft between 1,400 and 3,500rpm — than you'll find in any other rear-driven GT saloon for the money; and the turboed four-cylinder powerplant is as peppy as your right-foot wants it to be. Mid-range thrust is always there, courtesy of the smooth-shifting eight-speed autobox; it's not shy about revving although you don't have to be brutal to maintain a fast pace — and you'll be glad of the head-up speed readout as you can easily be travelling much quicker than you think.

A 149mph top speed should be fast enough for most; more pertinent is the zero-to-sixty sprint, which it dispatches in a crisp 5.8 seconds. Paddle-shifters on the wheel enable you to take over cog-swapping whenever you wish.

Neither is the T-GDi a glutton when it comes to fuel; at the end of a week's driving split about 50:50 between laid-back grand touring and some spirited driving, our real-life average was 31.8mpg (officially 35.8mpg). Being a Grand Tourer it's enough that you have all the power necessary without a raucous exhaust; pressing on you'll hear the 2.0-litre's almost brusque tone from the four oval tailpipes but unless you choose to trigger the active sound system the cabin remains quiet and refined.

The turboed 2.0-litre sends its power via the autobox and a limited-slip differential to be put down through the rear wheels. Whereas the electronically damped V6 gives you 365bhp to play with the 2.0-litre's 244bhp doesn't diminish the fun — whenever you press down firmly on the alloy accelerator pedal the acceleration is responsive and punchy.

BMW M division's ex-chassis and vehicle development guru Albert Biermann is part of the team that developed the Stinger. And like its bigger-engined brother, the 2.0-litre clearly benefits from the time spent pounding the Nürburgring to fettle the dynamics; the steering is well-weighted and the nose keen, the handling crisp, responsive and reassuringly well balanced with well-honed body control, and there's meaningful grip. In other words it's got the poise to accompany its pace — and it all stacks up to an engaging and entertaining driving experience.

Of course, much of the pleasure comes from the dynamics you get from a rear-wheel-drive set-up in tandem with a limited-slip diff; uncorrupted steering and sporting cornering composure. It helps too that the ride is so well matched to the handling. You also get Drive Mode Select which offers you five different gearshift and throttle response programmes including Sport, Sport+ and Eco.

The T-GDi has passive dampers rather than the adaptive items fitted to the 3.3-litre V6 but even so, and rolling on 18-inch alloys, the 2.0-litre's suspension delivers a supple and well damped ride that copes well with the potholes, bumps and broken blacktop that define too many of the UK's roads.

The Stinger's low-slung profile makes it easy to forget that this is a full-blown five-seater. Despite the sloping roofline and steeply raked rear screen, those travelling in the rear seats enjoy civilised headroom and an abundance of legroom. Long trips in the back are very comfortable with well-shaped leather seats, large armrests and ample lounging room, dedicated eyeball air vents with temperature control, USB charging and 12v power sockets.

The Stinger's regular-shaped boot will easily swallow 406 litres of luggage; for two touring in the grand style, folding the 60:40-split back seats opens up a very accommodating 1,114-litre loadbay, all easily accessible via the liftback tailgate. Need to tow? No problem — the 2.0 T-GDi can haul a braked 1,500kg.

With enticingly head-turning looks, the turboed petrol 2.0-litre Stinger is roomy and comfortable in the true gran turismo tradition plus there's fun to be had behind the wheel. And priced at thousands of pounds less than its rivals, it's an alluring GT you'll love to drive. ~ MotorBar