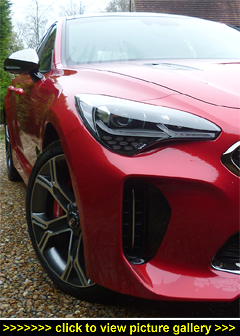 “If you were offered a 365bhp
168mph five-seater gran turismo
for Ł41K or, for the same money,
a top-spec, seven-seater 4x4 SUV,
which hand would you bite off?”

ANY KEEN DRIVER would leap at the chance of a high-performance sports machine over an SUV, especially one that seats five. Interestingly, the range-topping SUV and the Stinger GT S both wear the same badge; consequently they both come with Kia's 'best in the biz' seven-year warranty. Oh, and the Stinger has just won Best Performance Car in the 2018 UK Car of the Year awards.

First impressions count for a lot and the first time you lay eyes on the Stinger you'll definitely see a lot to like. Taking up getting on for five metres of blacktop, there's plenty of body for your Ł41K. Strikingly styled, there's no mistaking its GT intentions.

Overall the Stinger embodies classic gran turismo proportions: a long bonnet with a short front overhang and fastback-style tail; a long wheelbase with the cabin positioned towards the back of the car; and a lengthy rear overhang beneath broad shoulders with just a hint of a 'Coke bottle' nip in the waist.

The Stinger's cabin is everything a grand tourer's should be — stylish, smartly trimmed and well stocked with quality leather and tasteful trim finishings with metallic and high gloss black accents. The cocooning, low-slung sports Nappa leather seats benefit from vented centre panels for three-stage cooling on hot days; for cold ones there's fast-to-warm heating, also three-stage.

Plus there's a heated rim for the multifunction leather-wrapped wheel that's welcome not just during the winter but also for long journeys any time of the year. There's also full power adjustment with a two-setting memory (for seat, door mirrors, and head-up display) along with backrest bolsters that can be powered in or out for a bespoke fit and four-way lumbar support.

Although you sit low, visibility is fine (even through the steeply raked tailgate's 'letterbox' screen) and thanks to a clear view down the bonnet placing the Stinger is a no-brainer. The sporty flat-bottomed (or D-shaped as they're now being called) steering wheel is fab — very tactile with perforated 'work' areas and manual override paddle-shifters on the horizontal spokes. An electric parking brake with an auto-hold function minimises the frustration of stop-start driving in built-up areas.

Adding to the ambiance is a large one-shot powered glass sunroof that tilts and slides — if you enjoy 'real' air you'll be pleased to know that open at speed it's buffet-free. Meanwhile, keeping your attention focused on the road is a first-rate customisable head-up display that shows turn-by-turn navigation information, road speed, cruise, and blind spot detection warnings.

Naturally there's a large digital speed readout on the 7-inch multifunction digital trip display between the main dials (alongside the posted limit, which is repeated on the navigation mapping on the main touchscreen) — so no excuse for breaking the law!

Naturally there's also a host of safety kit and driving aids such as smart cruise, autonomous emergency braking, lane keep assist, high beam assist for the LED headlights, driver attention warning alerts, posted speed limit information, tyre pressure monitoring, rear cross traffic alert, and blind spot monitoring (particularly helpful is the warning you get if you indicate preparatory to changing lanes and there just happens to be a vehicle coming up fast in your blind spot).

In a car as quick as the Stinger it's reassuring to find that all of the important functions have their own independent controls (rather than being operated via attention-greedy fingertip dabs on a touchscreen) so actioning them is much less distracting when you're driving at ten-tenths.

While you're likely to be roaming far and wide in your Stinger, you'll always know exactly where you are and be connected — the crystal-clear eight-inch touchscreen provides navigation and infotainment via Kia Connected Services and TomTom with access to traffic updates, speed camera locations, weather information and local searches supplemented by Android Auto and Apple CarPlay smartphone connectivity with voice control for further linkage to maps, music podcasts, audio books and texts. Android Auto can also access Google Maps navigation and Google Play music.

Music can be through the digital radio (with MP3 compatibility) or streamed via Bluetooth; for concert hall-quality sounds the harman/kardon hifi is ready to rock-and-roll with fifteen speakers, subwoofer, and external amp.

Power-wise, three versions of the Stinger are now available in the UK, all with turboed direct injection engines mated to an eight-speed automatic gearbox: a 2.0-litre 244bhp petrol engine (from Ł32K); a 2.2-litre 197bhp turbodiesel (from 34K); and the range-topping 3.3-litre 365bhp twin-turboed direct injection petrol-drinking all-aluminium V6. While 365 is undeniably a macho number, better still is the accompanying 376lb ft of torque that guarantees a relentless shove from 1,300 right through to 4,500rpm.

The wide powerband means uninterrupted acceleration and surging pick up regardless of which one of the autobox's eight gears you're actually in when you drop the hammer. Don't lift off and 60mph will flash past in 4.7 seconds; keep your right foot pinned to the floor and the Stinger will keep on going all the way to 168mph.

Power is put down through the rear wheels via a limited-slip diff to ensure torque goes to the back wheel with the most grip. And those turbos aren't just for bragging rights — they ensure there's virtually no lag as the Stinger surges towards the horizon, and while you can rev the engine out to its redline there's really no need or benefit as mid-range it feels tirelessly punchy.

Cruising at 70mph the V6 purrs along; alternately, the active sound synthesiser can relay the engine note into the cockpit through the harman/kardon speakers. That said, we found it more entertaining by far to slot the selector into Sport mode and indulge the 3.3's refined low-down punch to make unruffled but understatedly rapid Q-car progress soundtracked by the likes of Born to Run (Springsteen) and Runnin' Down a Dream (Tom Petty and the Heartbreakers).

For the record, Drive Mode Select offers the driver five different shift and throttle response programmes: Smart, Eco, Comfort, Sport, and Sport+. For pressing on along demanding roads you might like to personally control up- and downshifts — no problem; gear changes can be made using the steering wheel-mounted paddles.

Given that this 3.3-litre twin-turboed V6 drinks from the green pump, its Official Combined Cycle fuel consumption figure of 28.5mpg is not bad. In fact the big surprise was that in real-life driving conditions we regularly saw 30mpg — and I promise you we definitely weren't driving Miss Daisy!

If you're reading between the lines you'll have 'got' that despite its seriously quick figures, the Stinger's raison d'ętre is not GT as in Fast and Furious but GT as in Grand Tourer. Gran turismo, as in savouring the journey as opposed to racing the clock (although it does that exceedingly well too) — the latter being something we all do every day in our permanently fast-forward lives; but in racing to the end of everything we forget to savour the moment.

Kia itself is the first to point out that the Stinger has the soul of a Grand Tourer even though its engine might be the heart of a road-burner. Select Comfort mode and it's as clear as day where its long-legged charms lie.

Matched by fluent shifts, the ride it serves up is supple and well damped — and compliant enough to take big bumps, sharp surface imperfections and even potholes easily in its stride. Around the houses there's an underlying firmness that's never fidgety and which promises good body control when you up the pace. Enhancing the ride refinement, and most notable when cruising, is the absence of wind and road noise.

Hearing how well the Stinger rides you may be harbouring doubts as to just how well it can rumble; don't worry — it's a satisfyingly accomplished sports saloon that will most definitely entertain you. If you're a dedicated follower of these things, the fact that ex-BMW M division's chassis and vehicle development guru Albert Biermann is part of the team that developed the Stinger says it all.

All the Stinger family, including the 2.0-litre turboed petrol and 2.2 turbodiesel, are rear-wheel drivers — the sure-fire set-up for a more exploitable and a more engaging drive. However, the V6 GT S is the only one to get adaptive dampers. In Sport and Sport+ mode (just twist the centre console-mounted driving mode control) they're firmed up along with throttle response being ramped up, snappier shifts with shift points modified to hold onto ratios for longer, and the steering weighted-up for sportier driving. Select the Smart mode and it adjusts the damping to complement your driving style. Comfort and Eco modes offer alternatives sympathetically matched to its grand tourer persona.

For a big car it feels remarkably light on its 19-inch Continental 'feet' and aided by quick variable-ratio steering at the front-end, torque vectoring that applies power and braking force to the inner wheel rear to minimise understeer while boosting steering feel and tractability, and good levels of grip, the Stinger's handling shows a well-balanced agility that keeps you resolutely on your chosen line through challenging twisties. What will surprise many is how close the slingable Stinger comes to fitting BMW's 'Ultimate Driving Machine' tagline.

Many a fast road car has been sold short by a set of so-so brakes. As anyone who knows anything about dynamics will tell you, before you can even think of exploiting power you need two things: a well-fettled suspension and a set of great brakes. Only then do you jack the horsepower.

The Stinger's brakes deserve a special mention: they're first-rate. Unique to the range-topping V6 is a Brembo braking system which uses larger vented and drilled discs with quad-piston callipers for progressive pedal action, greater feel and confidence-inspiring stopping power whether you're shaving your entry speed setting up for a slalom or anchoring up in an emergency.

And for those grand tour trips over Europe's highest mountain passes, their resistance to fade even with sustained use is extremely reassuring.

While you're busy savouring the Stinger's driving abilities, it's understandably easy to forget that this is a full-blown five-seater. The rear cabin, despite the sloping coupe roofline, offers plenty of space with plenty of legroom, even for taller passengers.

Those using the rear seats won't feel hard done by if they're not seated up front because they too get enveloping heated leather seats shaped for comfort along with more than enough room to lounge around on long trips with large armrests, their own air vents with temperature control and USB charging and 12v power sockets.

Given it's a five-seater grand tourer, the Stinger's boot is nonetheless unexpectedly functional, mustering a surprisingly accommodating 406 litres; better still, drop the rear seatbacks and this jumps to a very handy and seamlessly-floored 1,114 litres — more than enough for the luggage you'll need to do justice to a 'grand' tour. We can't see many owners wanting to tow in such a sporty-looking machine but if needs must then the Stinger will happily haul a braked 1,500kg.

Engaging to drive and strikingly-styled, the impressively capable 168mph Stinger challenges similar high-performance sports machinery from Audi, BMW and Mercedes with its abilities while at the same time undercutting them all on price and equipment. ~ MotorBar